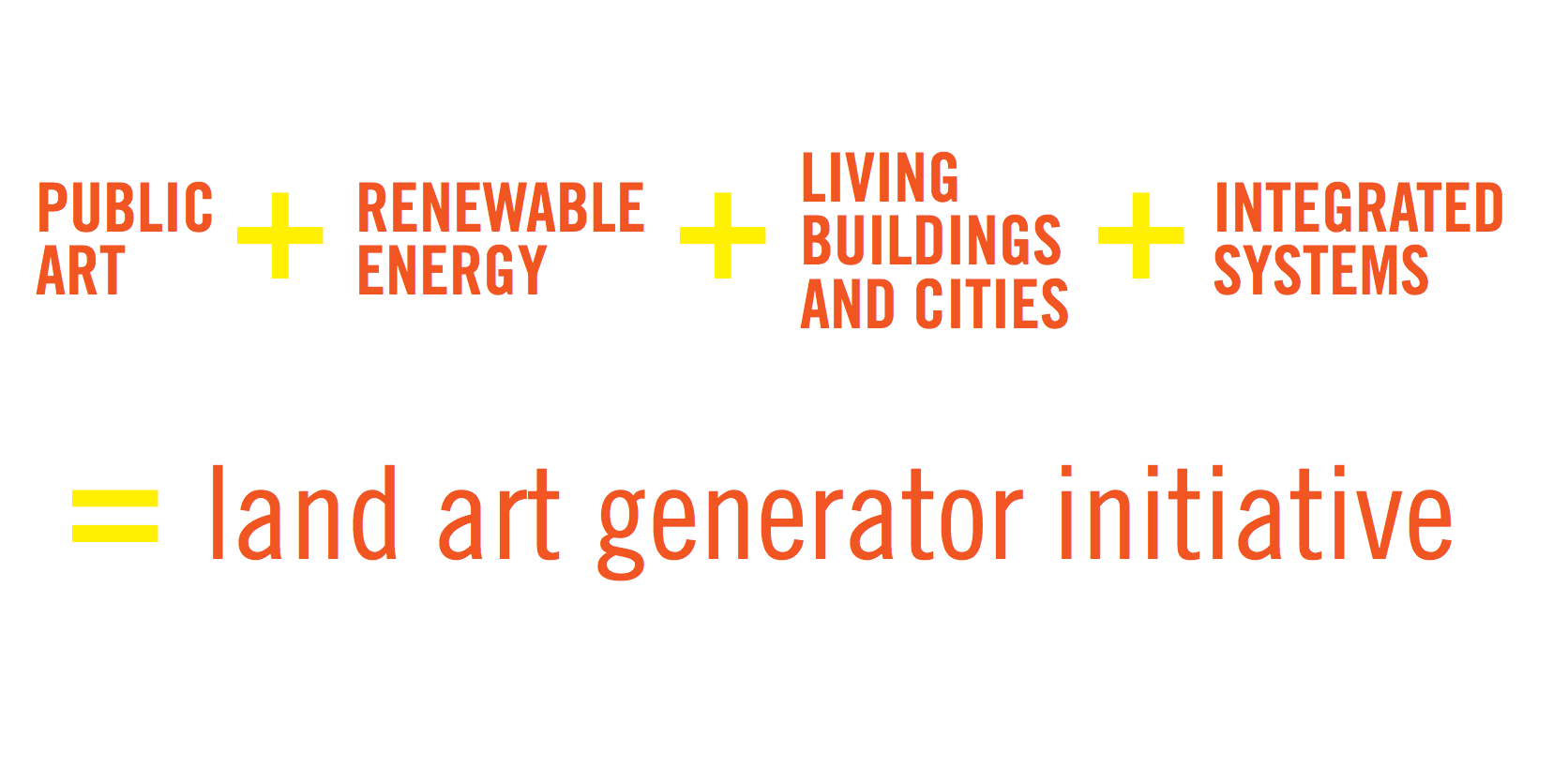 ArtCOP Scotland got off to a flying start on Wednesday when CCS hosted a talk by the Land Art Generator Initiative at the Edinburgh Centre for Carbon Innovation. 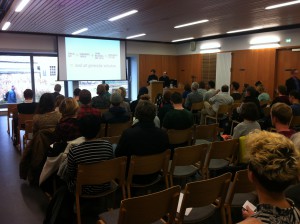 rectors of the Land Art Generator Initiative Robert Ferry & Elizabeth Monoian gave a good and very varied crowd a lightning tour of the project, which aims to combine public art with reasonably large scale renewable energy generation, and therefore, make renewables both more acceptable and more wonderful! The project started with a competition in Abu Dhabi in 2010, an open call seeking inspirational projects from teams of artists, engineers and architects to design beautiful renewables for the low carbon city of Masdar. This was followed by further competitions in New York (2012) and Copenhagen (2014). The next competition will be for Santa Monica in California in 2016, but Glasgow is hosting a mini LAGI this year.

Robert and Elizabeth showed us fascinating slides of projects as pedestrian (but obvious – why doesn’t this happen as a matter of course?) as long strips of photovoltaic cells along the side of motorways to extraordinary forests of poles that sway in the wind, squeezing piezoelectric actuators to generate electricity whilst creating a magical place to walk and play. Some of the projects are eminently do-able, others are on the edge of sci-fi. Although few (if any) of the designs have yet been built, there are some in the pipeline and it’s surely a great thing to have over 600 developed ideas in the bank, inspiring others, setting the agenda and creating the future. (There’s a long history of sci-fi leading to innovation.)

The mini-LAGI in Glasgow is a different sort of competition. Chris Fremantle of eco/art/scot/land co-hosted the ArtCOP Scotland event. He has worked with Sustainable Glasgow to enable LAGI to invite three successful teams from previous competitions to work with Scottish architects and artists to produce designs for beautiful renewable projects for a site at Dundashill in north Glasgow. (We were thrilled to hear that the project came out of an early Green Tease when Chris got talking with Heather Claridge from Sustainable Glasgow! That’s what the Green Teases are for. Get the next one in your diary now.) Dundashill is an exciting site urban site that is earmarked for development. It has wind potential (clue: it’s on a hill…) and possibilities in the canal that’s nearby. The teams are meeting now and they’ll work remotely over the next few months, reconvening in February with developed designs. Watch this space…

One interesting thing about the LAGI approach is the cross fertilisation that happens when you bring together disparate teams of artists, engineers, architects and others from different backgrounds. That’s precisely what we at Creative Carbon Scotland are trying to do, mashing up art and sustainability; that’s the very aim of the ECCI where we held the event; and that was the very nature of the audience. We had engineers, artists, students, educationalists, funders, energy managers… all mixed together in a glorious and fertile mix. I remembered how on a trip in a biosphere in Mexico I had been struck by the fecundity of that point where sea water meets river water – suddenly the mixture of different kinds leads to enormous variety of life forms. We ended the session with an invitation to the audience get talking to someone they didn’t know, from a different field. It came to a noisy and joyous conclusion.

Also in ArtCOP Scotland are a couple of other projects that link to the Land Art Generator Initiative. Ellie Harrison’s Radical Renewable Art + Activism Fund will use a wind turbine to generate energy to fund a ‘no strings attached’ grant scheme for art-activist projects in the UK. She’s launching the project outside the CCA on December 17th at 6.30pm. A Fairer Greener Scotland by 2030 will provide a different way of looking at the future, asking participants for ideas about how they want the future to look. The discussions are taking place in Edinburgh and Glasgow, so sign up now and maybe take a look at the blog about our Mull Sustainability/Arts residency in 2014 which imagined scenarios of a future Scotland. A glorious mix of artistic responses to climate change.

ArtCOP Scotland is Scotland’s Climate Change Arts Season, coordinated by Creative Carbon Scotland but incorporating events and commissions from many different partners and all over the country.

Many people from arts and culture are keen to get involved with making the most...