Home / News / Strategy / Ben’s Strategy Blog: How, and why, are we applying cultural practices to Clyde Rebuilt?

Ben’s Strategy Blog: How, and why, are we applying cultural practices to Clyde Rebuilt? 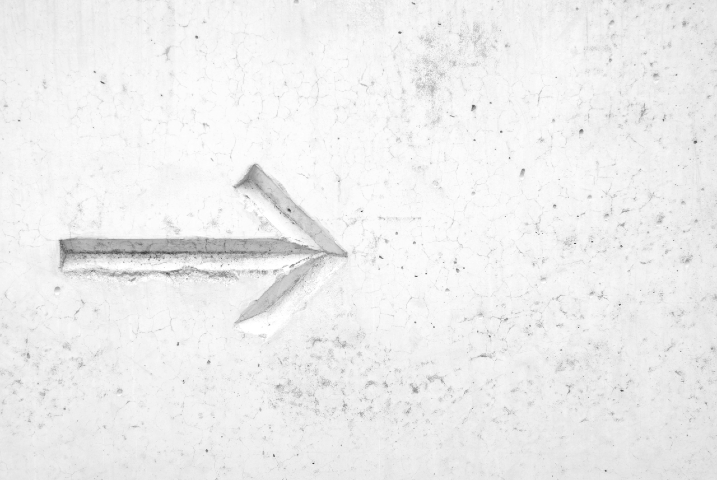 In our collaborative work on Clyde Rebuilt, Creative Carbon Scotland (CCS) is supporting development of inter-connected projects that will help Glasgow City Region adapt to the impacts of climate change.

Our partners on the Clyde Rebuilt project are Sniffer, a resilience-focused charity that runs the Adaptation Scotland programme for the Scottish Government; Paul Watkiss Associates, an economics consultancy specialising in climate adaptation; EIT (European Innovation & Technology) Climate-KIC (Knowledge and Innovation Community), the EU’s climate change innovation hub; and Climate Ready Clyde, the grouping of local authorities, universities, health trusts and others working together on adaptation in the City Region – an area that encompasses a third of the population and a third of the economic activity of Scotland.

What is our role in such a large project? Where do culture and the arts fit in? And why was EIT Climate-KIC, which is funding a significant part of the project, so keen to see CCS involved? In this strategy blog I’ll explore these questions and rehearse some of my own thoughts.

Our job, according to the successful application we submitted, is to ‘provide knowledge, contacts, management and advice relating to cultural practices, artists and approaches that will be harnessed across the work packages to achieve the project outputs and objectives…. [We will] use the kinds of research, knowledge, ideas, imagination, and techniques that are commonly used in the cultural world to input into and inform the work of the other packages within the consortium. This will be supported by the Director of Creative Carbon Scotland, who will provide expertise and advice to the Climate Ready Clyde team based on his combination of artistic and climate change experience.’

Collaborating on events about adaptation with cultural partners

The most obviously cultural thing we are doing is working on events with cultural organisations Rig Arts (a socially engaged arts and film charity in Inverclyde), Glasgow Women’s Library (the only accredited museum in the UK dedicated to women’s lives, histories, and achievements) and Lateral North (a research and design collective based on an architectural background that collaborates with communities and institutions to respond to social, environmental, and political change).

Rig Arts and GWL have each run events using their usual sort of work focusing in some way on climate change adaptation but starting very much from the viewpoint of the communities they work with. Rig Arts sent some materials to workshop participants who will work with an artist to create an e-zine using both visual and verbal forms to imagine responses in Inverclyde to future climate changes. Glasgow Women’s Library approached two speakers who stimulated a discussion with readers and volunteers from their regular audience for an event focusing on climate change adaptation from the perspectives of artist, Clem Sandison, who discussed food growing and issues around land ownership, and Dania Thomas, a trustee of the Ubuntu Women Shelter, who highlighted key issues around unrepresented voices in climate change discussions and the problem of the western-centric view of the issue and solutions.

In the final event with Lateral North the focus wasn’t so much on using cultural practices, but creativity kept on recurring in speakers’ and participants’ comments in a more standard workshop-type event. And working with an organisation coming from a creative and cultural background the participants came from a much wider group than would normally be represented at an ‘adaptation event’.

Crucially, these organisations and the communities they work with would not normally be invited to be part of the conversation about adaptation, and if they were, that conversation would tend to start from the adaptation perspective rather than the perspective of the communities’ experience of life in Glasgow City Region. But strangely enough, adaptation is not a concept that most people are thinking about! It is a professional issue for people whose job requires it. Creative Carbon Scotland’s contacts with cultural organisations mean we can introduce Clyde Rebuilt to these different voices. Our experience and understanding of such organisations mean we can help shape events using cultural practice and create an opportunity for these different perspectives to be fully expressed and explored. 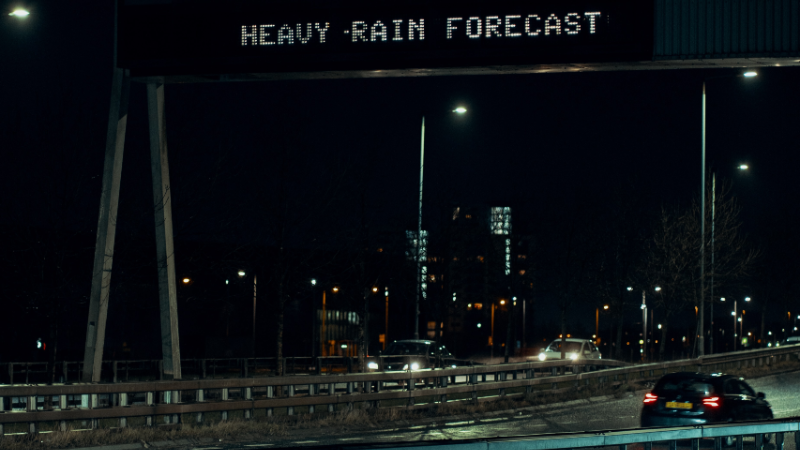 A second element of our work is contributing to both Clyde Rebuilt’s internal meetings and their workshops with outside participants. We bring in techniques and practices derived from the cultural world. For example, we have often begun Clyde Rebuilt team and Project Board meetings by reading a poem, and sometimes have used a haiku-writing exercise. And for our larger workshops we have replaced the energy-sapping (particularly on Zoom) ‘let’s go round the table introducing ourselves’ with an icebreaker where everyone is asked to close their eyes and imagine a future, climate–changed Glasgow City Region, and then speak about how their organisation is responding to a particularly severe heatwave.

Depending on your experience and point of view these may seem radical or very straightforward ways of doing things. The response from Clyde Rebuilt team members the first time we did the icebreaker surprised me. It took me no time to think up, as it is something I might have done in a drama workshop with a youth theatre or adult drama group, and yet it was felt to have been a very unusual and powerful way to start the meeting. I was rather gratified!

How do these approaches make a difference? First, they tell people that this isn’t the usual sort of meeting, so they had better sit up and pay attention. Second, they ask you to apply not just your knowledge but your imagination. Climate change adaptation requires us to put ourselves in the shoes of someone else – even if that someone is ourselves in a future time. Imagination is a powerful tool for this but is often neglected in administrative or technical roles and can even be frowned upon if your job involves technical knowledge; you don’t want an engineer to imagine the strength of wall needed for a new flood defence – you want them to do the maths! But you might want an engineer to imagine themselves living next to that flood wall, and how it would change their relationship with the river they have lived beside all their lives. Everyone round the meeting room table has an imagination that they use in other parts of their lives. Our job here is to stimulate it for these circumstances.

There’s also something important about joint imagining, where you do it with and as part of a group. This can build on and stimulate others’ imagination, which helps develop a richer, fuller picture of the future Glasgow City Region. The metaphors and references in the haikus will spur different but related ideas in others’ heads, stimulating memories or innovations, creating a shared set of references, widening the team’s perspective. And maybe this joint imagining requires people to commit to the group, sharing a bit of themselves, making themselves a little bit vulnerable (‘Will my poem be laughed at? Is my idea stupid?’), leading to a stronger bond between people and to the shared endeavour.

Contributing to strategic thinking and process

Finally, I have brought to the project my experience as a theatre producer and director, commissioner and writer of plays and operas, and manager of creative talents such as actors, writers, composers, and project managers. And perhaps surprisingly, Clyde Rebuilt is a project that has needed some skills and practices that I learned in those roles. For example: reading and understanding complex texts and images, written in obscure ways. As a director of contemporary music theatre I had to read, understand, interpret and communicate to musicians and singers the meaning of musical scores often written in unique notation, with lots of room for interpretation. One page from Sir Peter Maxwell Davies’ Eight Songs for a Mad King has the musicians’ and singers’ instructions (you can barely call them lines of music) in the shape of a bird cage, as George III was trying to teach his caged birds to speak. 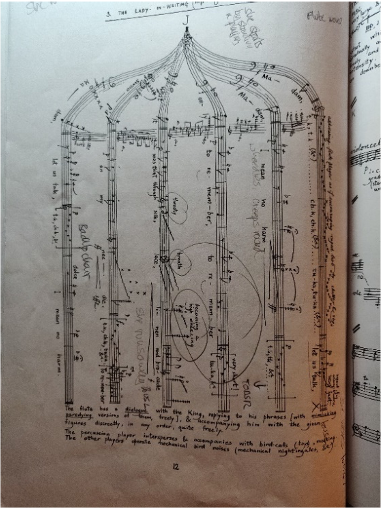 And compare this with a slide from EIT Climate KIC, whose language is complex and obscure, but does repay ‘translation’. I’m used to weird diagrams! 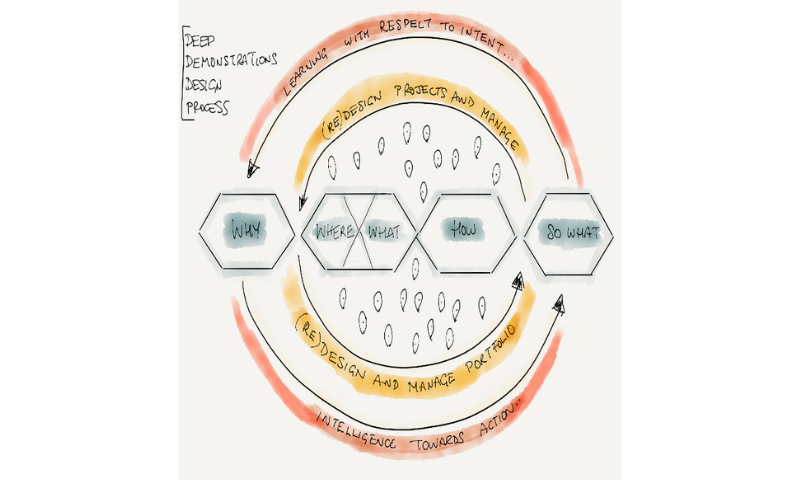 I’ve also been able to contribute to crafting the right narrative for key documents that need to be read and understood by a wide range of audiences. As a theatre director you need the skills to make sure that the whole audience is at the same point of understanding at the same time: if some people are behind then the entire audience loses its focus, different people will gasp or laugh or cry at different moments, weakening the joint response. These same skills can be applied to project descriptions and strategy documents. And this isn’t just about the writing, but also the shared thinking by the project team: we all need to have the same understanding for the ‘audience’ to get it.

And the process of co-design, whereby the project is not designed by a small group but is jointly created by the project team, participants at workshops and others, is remarkably similar to the process of rehearsing a play. As director I was mandated to make decisions for the group but needed to earn and maintain their trust and respect, melding ideas from others who are much more knowledgeable than I am to create the best possible outcome. This takes time, listening, thinking and sometimes diplomacy, and the same has been true in Clyde Rebuilt.

These and others are transferable ‘cultural practices’ that I hope enrich the whole team and the project. They aren’t exclusive to cultural practitioners, nor do all artists use them, but our training, our experience and our jobs often strengthen these skills and techniques.

The Clyde Rebuilt project is complex, enormous in scale and very challenging. The whole aim – and the reason EIT Climate-KIC is funding it – is that these projects require us to do things that nobody has ever done before. That suits an artistic perspective well; which artist ever wanted to do the same as someone else? I feel we contribute usefully to the project and we’ll be doing some research at the end to understand better how effective it has been and in just what ways these practices have had an impact.

Our partners in Clyde Rebuilt:

Adaptation is like recovering from a debilitating disease (in this case,...