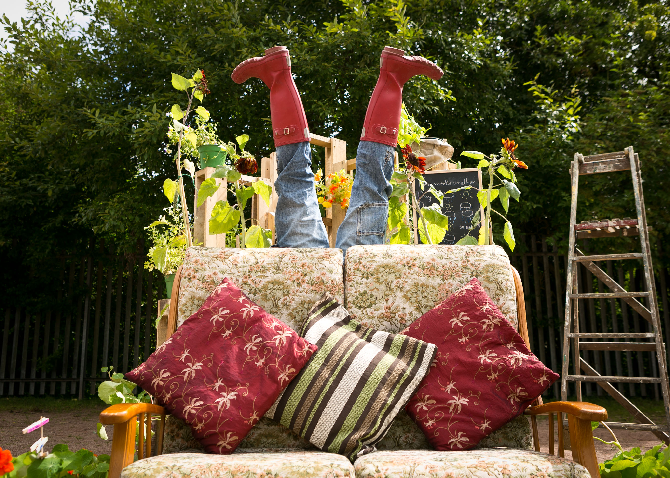 The Green Tease events are an opportunity for people interested in arts, sustainability or both to come together and discuss …

The Green Tease events are an opportunity for people interested in arts, sustainability or both to come together and discuss various ways in which the arts can engage with sustainability issues. This month, the Edinburgh Green Tease was led by a theatre company which has grown a living stage to be used in its latest production, while the Glasgow Green Tease was led by visual artist Rachel Duckhouse and looked into how we can use art to engage with climate change in our daily lives.

This Edinburgh Green Tease was led by Eco-Drama, the schools-touring programme of the Whirlybird Theatre Company. Their aim is to use theatre, music, storytelling and creative workshops to engage, entertain and inspire people of all ages to care for our natural world. Director Emily Reid, alongside Set Designer Tanja Beer and Assistant Set Designer Mona Kastell, came to discuss their latest production Uprooted, which features Scotland’s first ever Living Stage.

The Living Stage is exactly as it sounds: a stage composed of living plants. It is recyclable, biodegradable, edible and created from locally found and reclaimed materials. Tanja Beer, author of this wonderful idea, has travelled all over the world working with local permaculturalists and theatre-makers to create living sets. Since its debut at the 2013 Castlemaine State Festival in Australia (see video below), the project has only grown (no pun intended) and has since travelled to Cardiff where it was part of the Trans-Plantable Living Room and now into Scotland.

The Living Stage for Uprooted was created as part of Eco-Drama’s ‘Out to Play’ programme, working with four Glasgow primary schools to design, grow and build the living theatre set. Having seen that many of these inner-city schools only have concrete playgrounds, the idea of a touring garden developed to give the children a chance to experience the natural world. They were involved in designing aspects of the production (plants growing out of a toilet proved particularly popular) and they planted the first seeds in March 2015.

Of course there are many challenges to creating a Living Stage and touring it in a sustainable manner. They’ve successfully tackled this latter problem by becoming the proud owners of an electric car and ‘The Magic Van’, which runs entirely on repurposed vegetable oil (the best stuff comes from Indian and Chinese takeaways by the way – chippy oil has been used too many times). Some of the other challenges include having stunt-doubles for some plants which have active performance roles (so that they each have a time to recuperate) and ensuring that there is enough time to be sustainable.

Timing is key in any sustainable production. 80% of a product’s sustainability is locked in at the design stage, with the earliest stages of the design process having the greatest influence over its environmental impact. Careful planning is needed and sufficient time granted to locate sustainable components and, in this case, to grow the plants needed in the production. Gardening is arguably the slowest of the performance arts and cannot be rushed – a sunflower doesn’t care when you’re supposed to go on tour, it will bloom when it pleases!

The final challenge is deciding what to do after the production has finished. The Living Stage is a ‘Zero-Waste’ set so nothing will be thrown away or discarded. Rather, it is going to return to one of the schools which helped plant it and be installed as a permanent feature – turning an ugly metal fence into a thing of beauty. It will be in a public, and therefore unprotected, space but the hope is that, because the community helped to create the garden, they will have a deeper connection to it (and a desire to care for it) than if it had merely been dumped upon them.

The Glasgow Green Tease session was led by visual artist Rachel Duckhouse, who has held the associate artist position at the Gallery of Modern Art (GoMA) in Glasgow for the past 18 months. One of the initial aims of this position was to engage the GoMA staff in questions around climate change and sustainability, thereby further considering what role art has to play in tackling sustainability issues.

Rachel began the position by considering the GoMA building and her artistic responses to it. For example, she researched and then drew energy flows through the building and made cyanotype prints from the light streaming through the stained-glass windows. As a point of interest, cyanotype printing is a photographic printing process which produces a cyan-blue print (hence the name). It was used by engineers well into the 20th century as a means of copying drawings, giving us the term ‘blueprint’.

Her ultimate ambition for the project was to produce work that genuinely responded to the people who worked at the GoMA. This led to her creating ten pen-and-ink portraits (of sorts) of different staff members. In these she tried to map the individual in relation to the Gallery of Modern Art both as a building and an organisation, but also in the wider context of the outside world and the issue of climate change. Rachel’s portraits can be seen here.

To do this she used a complex system of indices and it became apparent throughout the process that it is very difficult to feel that climate change is something close or central to our lives. It always seem separate, distinct from our day to day goings on and the relationships we hold. Encouraging people to realise that climate change is a personal issue that will affect every aspect of our lives is one of the greatest challenges to sustainable action, and is also one of the areas where art may be most effective.

Sometimes the best way to learn is by doing, and so to help us understand her methodology Rachel set us the task of breaking into pairs, interviewing each another and then attempting to create similar portraits based on our interpretations of what that person had described. Rather than our connection to GoMA, we were asked to think about our relationship to the Green Tease, Glasgow and the wider environment.

The fact that our portraits were interpretative as well as representative saved the artistically-challenged among us from embarrassment (I never was very good at drawing!). It was also a really useful exercise as we all benefited from the physical process and act of drawing. Trying to visualise abstract concepts about questions of climate change helped us to pin-down and refine our understanding of them, which in turn developed the ideas that we had about climate change and how to relate to it in our daily lives.

If these events sound like something you’d be interested in, come along to our Green Tease events in September.

In Edinburgh we’re teaming up with the Edinburgh & Lothian Green Spaces Trust to go on a special canal barge tour where we’ll learn about Edinburgh’s urban green spaces and discuss their connection to the Green Tease network. Alternatively, come along to our Glasgow Green Tease where there’ll be a practical model-making workshop led by design practice Dress for the Weather, exploring the East End of Glasgow in relation to art and design.