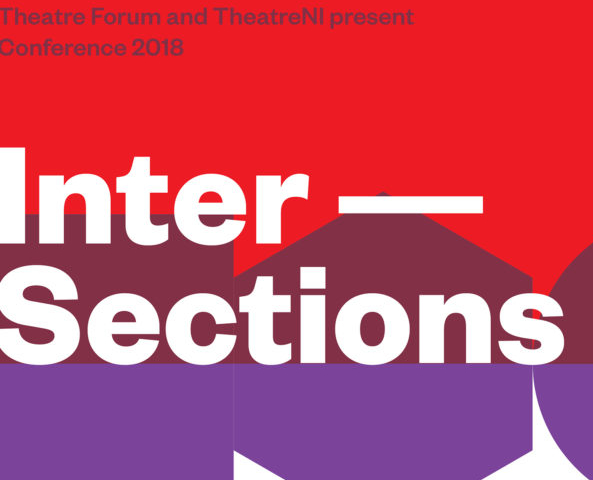 The Irish Theatre Forum – a whole-island network of theatre makers, presenters and practitioners – held its conference in Belfast towards the end of June. Two key themes were Brexit and climate change, and climate change was represented not only in the programme but the way in which the conference was organised, with low carbon travel encouraged, a fancy glass Keep-Cup for every delegate and a zero-waste policy across the board.

The conference began with theatre critic and political commentator Fintan O’Toole giving a great keynote address about why and how Irish theatre should address Brexit. Lots that he said has resonance for anyone thinking about either climate change or the arts. Much of it flows from this article that he wrote about Brexit and nationalism in the Irish Times.

O’Toole referenced the Nobel Prize-winning Irish poet Seamus Heaney, who lived and wrote throughout the period of the Troubles, as asking ‘What does an artist do in times of trouble? What is their role?’ This is clearly a question close to Creative Carbon Scotland’s heart. In response, O’Toole described six ways in which theatre works, which may be as helpful to society in thinking about climate change as to dealing with the very present question of Brexit for the island of Ireland. So here is my interpretation of what he said. As a former theatre director, theatre is close to my heart and I think it has great potential for bringing about societal change, but much of the following is also relevant to other art-forms.

Theatre is a shared space with a ‘fourth wall’

First he pointed out that a theatre is a shared space and the act of theatre is equally a sharing: between playwright, company and audience, and between audience members. (As the theatre architecture consultant Iain Mackintosh argued in his book Architecture, Actor and Audience, in the theatre you are aware of your fellow audience members and are part of a joint venture. As you experience the show together, the reactions of your fellows affect your own and this joint reaction affects the actors. Thus the best theatres have seating set at a shallow rake and with gently curving rows so that you are aware of those in front of you and to the side, whilst cinemas, where audience members have less influence on each other and none on the performance, have steeper rakes, higher seat backs and straighter rows so that you’re more on your own.) This possibility of sharing a neutral space to discuss difficult issues is crucial in a community, nation or island divided by religion and politics and has resonance for those of us thinking about climate change. Like religion, politics and Brexit, climate change increasingly makes us question our core values and beliefs and the result may be challenging. We need somewhere to discuss these questions and theatre, as well as other performing arts, provides that somewhere both physically and conceptually.

O’Toole’s second point was that the ‘fourth wall’ in theatre – the invisible wall at the front of the stage that allows the audience to see and hear what’s going on in the ‘room’ that the actors inhabit – is permeable. Not only can characters or actors speak directly to the audience but the audience can and does respond to and affect what’s going on on stage. An actor breaking the fourth wall makes the audience complicit in the action that’s taking place on stage. They engage us in the discussion and require us to participate – to give consent or to withhold it. And the permeability also offers an opportunity to try ideas out. Actors and directors can tell when the audience is thinking ahead of the characters and plot or doesn’t buy the logic or thinking of the writing or the interpretation. The business of rehearsal aims to expose those gaps in the thinking and tighten it up, but the real test comes when an audience joins the debate, with far larger numbers involved and a wider range of views. In the 1980s, before the Berlin Wall came down, a great deal of political discussion took place between the stages and audiences of packed theatres in Eastern Europe. When the action moved to the streets, the theatres emptied. I’d suggest that addressing climate change requires a far greater revolution than took place in 1989, but the theatre is a good place to hold the preliminary discussion.

Theatre is a risky business!

O’Toole’s third point was that the theatre is a place of unfixed identities. By definition the actors are assuming identities that are not their own. And in a way, as an audience member you are required to give up a bit of your own identity to take part in a shared experience of a different time, a different place. Theatre – and other art-forms – ‘take you out of yourself’. We feel for or against someone we don’t know, form opinions about something we knew nothing about before we entered the theatre or picked up the book. And this feeds into O’Toole’s fourth point: theatre asks us to put our assumptions at risk; when we enter the theatre we must be open to challenge.

I’m interested in this last point, as I think it comes to the heart of the role of art and artists in ‘times of trouble’. I’m not sure the most popular works of art really place our assumptions at risk. Genre novels, the show Les Miserables, much popular music – these are what top the best-seller lists, but surely people (re-)read, (re-)attend, (re-)listen to these to have their assumptions confirmed, not challenged? So is what O’Toole is saying only applicable to literary fiction, subsidised theatre, un­-popular music etc? The answer may well be yes, but this isn’t necessarily a defeat.

The assumption that an artistic work needs to be popular to have a significant effect on society is predicated on the premise that what the work is doing is communicating an idea, so that lots of people need to experience it for it to be effective. And clearly there is some communication going on, and works of art that successfully communicate ideas that have resonance for society often become popular, even if they start off being less so. But the modernist movement in the arts has had an enormous impact on most of culture today, including popular culture, although the modernist works themselves may well inhabit the literary fiction/subsidised work end of things. The wider impact of cultural change may well spread not only into popular artistic works but into the wider culture of language, education, the way we think of ourselves and our world: in short, it affects the way society thinks.

Art helps us think and know how to think

Maybe therefore O’Toole’s point is that it is important that Irish theatre engages with Brexit (and I suggest that the arts generally should engage with climate change) because theatre helps society to think – not by telling people what to think, which would perhaps be closer to the idea of ‘communicating climate change’, but by helping society to do some thinking: providing a neutral space to do it, providing other people to do it with, providing some ideas to work on and agree or disagree with, making the audience complicit in the decisions. Perhaps more importantly, at times of great change when the basic assumptions of society are shifting, theatre and the arts can help society learn how to think. Modernism provided new structures to help us think about a world where Europe’s basic understanding of science was changing. In the 21st century we need to rethink our consumption-based society, and we badly need some help to do so.

Art is good for our relationships especially those with strangers

O’Toole’s fifth and sixth points help here too. He said that theatre requires us to enter into the experience of strangers – both those on the stage and those around us, who may be responding differently to ourselves. Climate change has implications for inter-generational, inter-national and inter-class justice and requires us to understand and enter into others’ ways of life and ways of being. Some of those others may be physically or culturally far away or not yet born, and theatre and art may offer the only way into their minds and ways of understanding the world.

Finally, O’Toole argued that a great thing about theatre – and this is true of all good art – is that it is inherently ambiguous. It revels in nuance and uncertainty. Indeed an embrace of uncertainty and ambiguity is essential to it: the literary critic Deborah Lilley argues ‘the acknowledgement of uncertainty marks the beginning of the exposition of the problem’ and goes on to explore the poet John Keats’ idea of the state of ‘negative capability’: ‘when a man (sic) is capable of being in uncertainties, mysteries, doubts, without any irritable reaching after fact and reason’[1]

The exciting thing about the Irish Theatre Forum conference was that the debate was strong and there were theatre and arts people there from all over Ireland and representatives from the Arts Councils of Ireland, Northern Ireland and England, the UK Department for Culture, Media and Sport, Creative Europe and others. O’Toole’s talk generated rich and nuanced questions and discussion that bled into the session that I was part of on climate change.

The importance of stories

And as I listened to the debate it struck me that the outcome of the Republic of Ireland’s abortion referendum, which took place not long before the conference, was clearly influenced by the stories that women told of their own, their friends’ and their relations’ experiences. Stories brought the subject to life, confronted the nation with sometimes unwelcome and often unheard truths, made the listeners complicit in those same stories and asked them to re-understand the country they lived in. Stories of course are the stock in trade of theatre and they change the world – not just by communicating truths but providing a space, some raw material and a structure within which we can learn how to think anew.

[1] LILLEY, D. 2013. Theories of certain uncertainty: climate change and negative capability. symploke, 21, 97. But also, re-reading this, I realise that ‘being in uncertainty… without any irritable reaching after fact and reason‘ is a pretty good description of many Brexiteers. Hmmm.

If you’d like to receive my occasional informal email which will give you a prompt to read my blog, links to other items of strategic interest and opinionated comments, you can sign up here.