Ben’s Strategy blog: How we bring about change – Individuals, Organisations and Structures 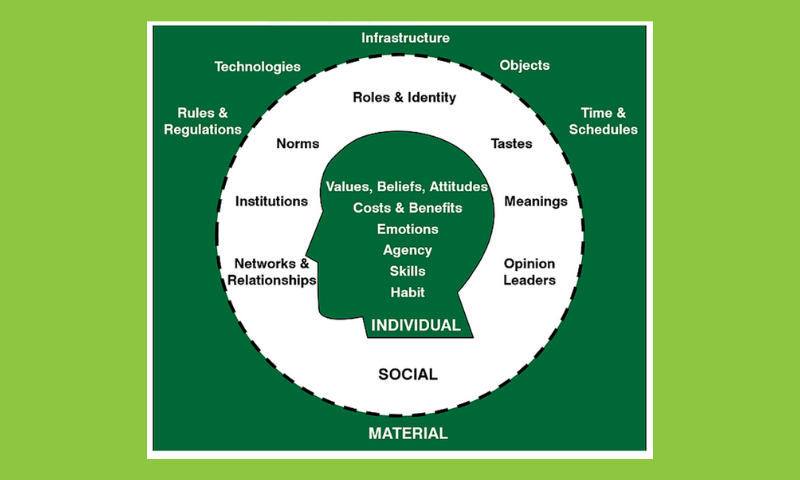 Image of ISM tool taken from https://www.ismtool.org/ A silhouette of a head inside a circle inside a square demonstrates the different domains of the Individual located within the social and the material

‘Brave!’ That’s what a fellow theatre director said to me when I quit directing to work on setting up Creative Carbon Scotland. I have an idea they really meant 'Stupid!'. Whether they’ve changed their mind I don’t know, but Creative Carbon Scotland is eight years old and the climate crisis is now on the agenda of the Scottish cultural sector in a way that it simply wasn’t when I started.

That responding to the climate crisis is now part of cultural organisations’ work and practitioners’ thinking isn’t just down to us, of course: society is much more aware of it overall and regulations, news stories and campaigns all make it part of the general discourse. It’s sometimes tricky to know whether our work has had much impact at all, and this is something we’re determined to get better at understanding with some work this month on how we go about doing so.

One area where we can be confident though is in our work with various strategic organisations where at least some of our work has paid off. Most obvious is the work with Creative Scotland – the main body distributing Scottish Government and National Lottery funds to the arts, screen and creative industries. Creative Scotland was interested from the start but climate change wasn’t top of their agenda – we needed to demonstrate that there was also interest within the sector. Even then it took some time for crucial elements to get started.

Creative Scotland had been discussing with us the idea of introducing carbon reporting for some organisations from 2012 or 2013, but it wasn’t until 2014 that they finally announced that Regular Funded Organisations (those arts organisations receiving funding for a three-year period) would need to start measuring and reporting their carbon emissions from 2015/16 onwards. The success of this meant that the always-planned next step – a formal way of planning to reduce carbon emissions rather than just measure them – was easy to introduce, and Carbon Management Planning began in 2018. That gives some idea of how long these things can take.

But constant discussion and working closely with the staff there now means that Creative Scotland are thinking about how climate action can be integrated into the processes for other funding streams. This is a big step forward. In the autumn of 2018 I delivered training for most of the Lead Officers that have direct responsibility for the relationships with Regular Funded Organisations. In the past this sort of work has been more ad hoc: some years ago I provided some training for organisations which had received capital funding, but not directly for the staff involved. Next year we hope staff and funding recipients will start having training workshops together to share and develop their joint knowledge.

We are in discussion with Creative Scotland’s new film unit Screen Scotland to talk about how it should act on climate change. The BAFTA schemes Albert and Albert+ are already used by many producers when planning productions and we have supported BAFTA in providing Albert training in Scotland for some years, and this is now becoming more formalised.

More recently we’ve extended our work with other strategic organisations. We’ve always been members of and provided specific advice to the Edinburgh Festivals’ Environmental Sustainability Working Group – the experience from that and work with a pilot group of theatre, dance and music organisations which were members of the Federation of Scottish Theatre informed our training work from the beginning. We’ve now done workshops with staff from both the Federation of Scottish Theatre and Youth Theatre Arts Scotland exploring how they can mainstream work on climate change, building it into their other work.

Why write about this now? Partly it’s to explain what I think of as our ‘Individuals, Organisations, Structures’ approach to bringing about change. As I touched upon in my last blog, Creative Carbon Scotland grew up in parallel with the Scottish Government’s development of the ISM Model which is their tool for bringing about ‘behaviour change’. The ‘ISM’ stands for Individual, Social, Material, and the following, taken from the ISM tool website, explains it well (as you’d expect…) and the image at the top of the page helps:

​ISM brings together into a single figure the main factors from the three disciplines most concerned with understanding behaviour: behavioural economics, social psychology, and sociology. The factors are arranged into three contexts, symbolised by a head (the Individual) in a circle (the Social) in a square (the Material). Evidence from reviews of international behaviour change interventions suggests that lasting change requires action in all three contexts (Southerton et al, 2011).

The aim of the ISM tool is to move away from the focus on the individual and getting them to ‘change their behaviour’ and instead acknowledge the complex web of factors that lead to individuals acting in the ways that they do. Although I have some misgivings about it, rather than having any argument with the thinking behind it this is because I have found that in the demonstrations of it and reports I have heard of it being used, people still tend to end up focusing on the individual.

When Creative Carbon Scotland was developing, therefore, the ideas behind the ISM tool were in our minds. We realised that to bring about change in the cultural sector we needed in a parallel manner to bring about change in Individuals, Organisations and Structures. We needed to push on all three fronts at the same time, as the different levels act upon each other both upwards and downwards: 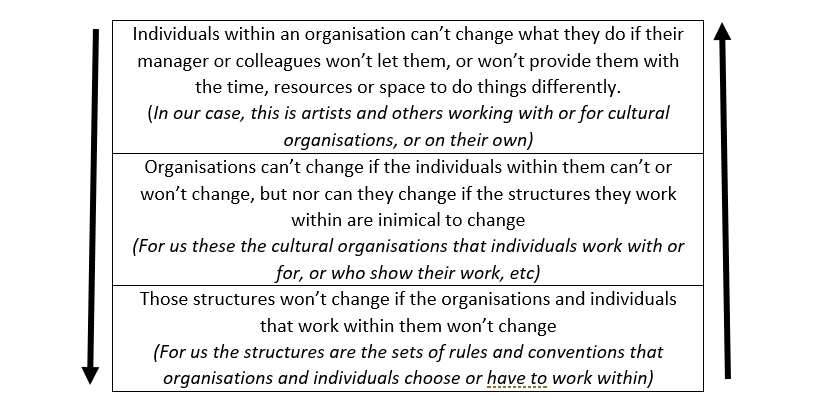 Our work with Individuals includes the Green Tease and the Green Arts Initiative. Our work with Organisations includes the Carbon Reporting and Carbon Management Planning work we do with Creative Scotland and it also includes the Green Arts Initiative, which is about the organisations as much as the individuals who work in them. In our Structures work – which is the work I’ve been writing about above – we try to bring about change in the ‘rules’, formal and informal, which govern and affect the way organisations and indeed the whole of the cultural sector works.

One reason therefore for working with our partner strategic organisations is to mainstream those areas of work so that we can concentrate on the next steps. By helping them to integrate into their core work ideas and processes that we have tested and know work, we can clear some of our own time to focus on more strategic actions that will take us all to the next level.

But the other reason for writing about this now is because, just as the public awareness of climate change has increased, so has the urgency of the situation. The Intergovernmental Panel on Climate Change’s (IPCC’s) 1.5° Report last year, a recent paper suggesting that the oceans have been absorbing extra heat at the rate of 5 Hiroshima nuclear blasts per second, the fact that Scotland’s excellent progress on decarbonising the energy supply is masking our failure to reduce the harder areas like transport and agriculture: all these point to the need for more, faster action now. Those strategic organisations we already know, and others we want to engage with, need to get more ambitious in their climate action and we will help them do so.