Ben’s Strategy Blog: What exactly is the Overton Window? 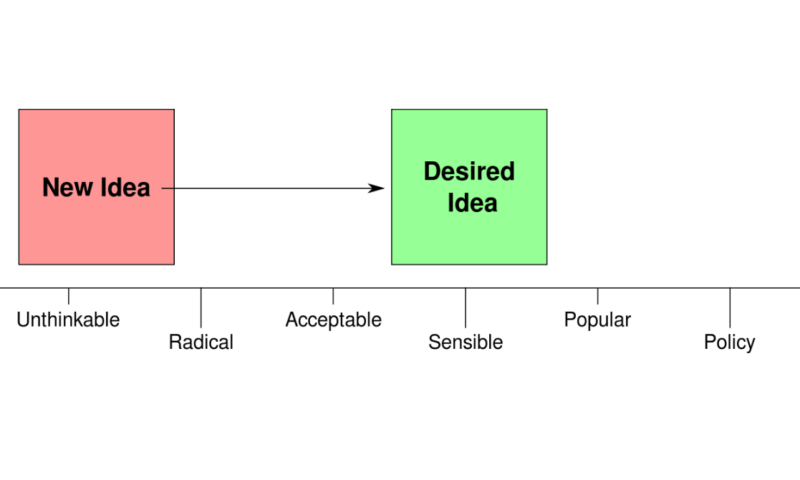 It has felt a funny couple of weeks here at Creative Carbon Scotland HQ. For the first time in our eight-year existence the climate crisis has been top of the agenda in the news: everyone’s been talking about Extinction Rebellion and the idea of the UK getting to zero-carbon by 2025. Meanwhile I've been stuck in the office.

Instead of gluing myself to North Bridge, I’ve been working on long-term, slow stuff: developing strategic relationships, planning training for later in the year, discussing projects about adaptation to flooding. I’ve found it a bit discombobulating: is Creative Carbon Scotland on the right track or should we be advocating direct (cultural?) action?

I think I have to hold my nerve. Addressing climate change is a long game as well as a fast one. We need all of the above, not the fast stuff or the slow and steady, but both.

One reason for this was mentioned by Chris Stark, the Chief Executive of the UK Government’s Committee on Climate Change, in a good speech he gave back in March:

‘It is worth reflecting on how the public discourse has shifted to permit these moments. It feels very much that the ‘Overton Window’ has moved – and rapidly in recent months.’

Richard Dixon, Director at Friends of the Earth Scotland, mentioned the Overton Window the other week at an event I was at. I hadn’t heard the term before but my understanding (thanks Wikipedia, amongst others) is that it refers to the realities of policy making and politics. Policy options within the Overton Window are those that are considered within the bounds of legitimacy: those outwith it are options that just aren’t considered publicly acceptable. Chris Stark is suggesting that ideas and policies that would have been considered outlandish a couple of years ago are now in the realm of the possible.

So what exactly is this window everyone’s on about?

A note of caution here: Joseph P Overton, who invented the term, was a Senior Vice President of the Mackinac Center, which is a free-market think tank in the US. Such right-wing pressure groups have been very successful at applying the concept and deliberately shifting the window so that previously unthinkable policies (marketisation of the health service in the UK, privatising prisons in both the US and UK, Brexit etc) have become areas that are considered acceptable for discussion. It’s important that the climate crisis is not perceived as a left/right issue and perhaps it’s good to see a successful approach being applied to what in my view are more useful areas. But I do find myself a mite uncomfortable about adopting techniques associated with the Koch brothers.

Richard Dixon used the term to argue that Friends of the Earth Scotland welcomed the more radical Extinction Rebellion’s existence and demands, even if FoE didn’t necessarily espouse them. XR made what might have previously been considered FoE’s unreasonable views more mainstream, so when Richard is arguing for the Climate Change Bill to be more ambitious, politicians are more likely to listen.

Is it an age thing? I just had my 57th birthday!

I think I’m in the same camp – and I’m aware here that I have a history of working from within existing structures which are arguably the establishment, but trying to change things from the inside. As a Board member of the Scottish Arts Council I was certainly an insider, but succeeded I think in arguing for some different approaches. (I didn’t succeed with everyone: I was once told that I was the second most unpopular person in Scottish theatre – which was a bit of a worry since that was precisely where I was trying to earn a living.)

I’ve long been quite interested in change and, because at the Scottish Arts Council I was chairing the committee that distributed National Lottery funds, and there was a requirement that the funded activity was ‘additional’ (whatever that meant), we were always working with the future, rather than continuing the past, and that meant that we could explore new ideas, some of which became mainstream. I think something similar can be said for working on climate change and sustainability in the arts: because it’s a new topic and no-one’s particular responsibility, you aren’t dealing so much with existing stuff, you are constantly breaking new ground.

So although I find it a bit uncomfortable not to have joined the protesters, we can benefit from it while continuing to work in slower and steadier way. I’m currently planning some workshops for cultural organisations and the officers from the main distributor of Government funds to the arts in Scotland, Creative Scotland, and it’s clear (viz Chris Stark and others) that I can make the case for much more ambitious plans than would have been thinkable even a year ago. The window has moved and perhaps particularly in the last few weeks.

Some examples: while you might expect us to have Declared Emergency along with many other cultural organisations across the UK (including Jerwood Arts, the Royal Court Theatre, Battersea Arts Centre, even not particularly radical Theatr Clwyd, for goodness’ sake ), perhaps more unexpectedly, Aberdeen Performing Arts and the Traverse joined in the Letters to the Earth project and the Edinburgh International Festival this summer is hosting the Royal Court in an International Climate Crisis Residency (note that’s a ‘climate crisis residency’, not even just a plain old ‘climate change’ one!). None of these projects would have happened, or been so overtly focused on climate change, even a year ago. The slow and steady stuff is working.

Main image: Diagram of The Overton Window, taken from https://voxeu.org/content/moving-overton-window-let-debate-continue