Blog: Harry Giles – A provocation for the Edinburgh Fringe 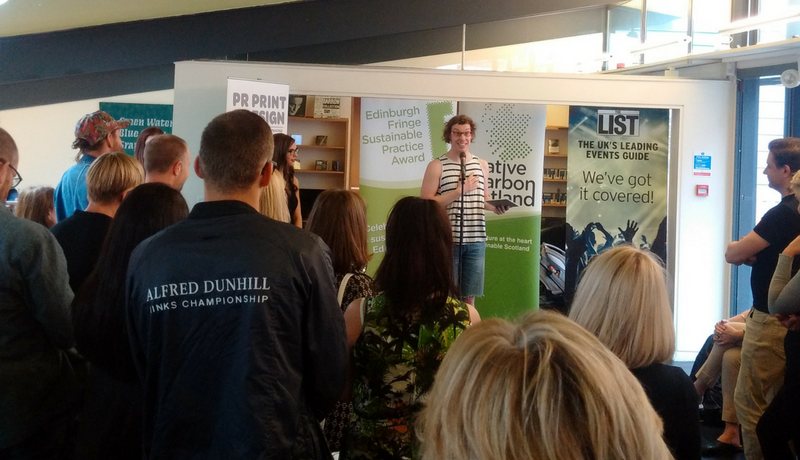 I’m going to start with a confession, which is that I haven’t seen a single Fringe show this year. I have a couple of excuses – I moved house this month, and I’ve had a job in Glasgow all this week. But truth be told I didn’t avoid moving in August when we were given the purchase date, and I actively organised to spend a third of the Fringe in Glasgow. Whoops.

August in Edinburgh is the month of break-ups and breakdowns. Every year at least one of my friends has a major life crisis and needs looking after – sometimes it’s me. It’s something in the air, or in the market. I’m an artist, and have a number of different roles in the arts, so in August the city is full of my friends from across the country – and the world – but I don’t usually get to see them until they start to crack. You can see it in the Facebook status updates and midnight texts: as the month proceeds more and more of us get more and more broken. Bits of us fall of, and we hope there’s enough of us to last to the end of the month. We hibernate and regenerate for most of September.

We all know that the Fringe is unsustainable, and increasingly folk are willing to say it. The physical and emotional unsustainability that’s clear to anyone working or living here in August – the atmosphere of constant activity, the expectation of constant work, the late nights, the unending obligations, the crowds, the noise, the failures, the debt – is a direct and systemic product of the economic, social and environmental unsustainability. Focus on that jargon for a moment and think about what it means: activity that cannot be sustained. It literally can’t keep going forever.

A little background on me before I keep going. My undergraduate degree was in that glorious oxymoron, Sustainable Development, the latest in a long line of self-contradictory political terms, like Free Market, Democratic Election, or Pursuit of Happiness. After a theatre masters, I worked as the Environment Officer across all the Edinburgh Festivals, including the Fringe. Now I’m an independent writer and performer, just about making a living from it, making work that focusses in one way or another on radical social change. It might seem a bit odd, given all those optimistic pursuits, that I’m now being so profoundly negative, but I’ll come back to that. First, I want to have a hard look at the problem.

First, the economic and social unsustainability. The Fringe is a festival of the rentier: artists struggle to make money, most pay to perform and many lose money; venue staff and volunteers frequently suffer highly exploitative and often illegal working conditions; a very few venues make money and that trickles up to the top; the only real profit is in owning a pub, or a hotel, or an AirBnB room – or a University. On top of that, the gravitational pull of the Fringe means there’s three months of the year where performing artists can’t really find paying work, and the huge August revenue hasn’t stopped year-round independent venues from closing year on year, with music in Edinburgh suffering the most. This is a completely unworkable economic, financial and cultural model: it cannot keep going.

Then, the environmental unsustainability. We’ve built the economy of a whole city on a system of international air travel that literally cannot be sustained: it’s just a question of whether the oil runs out or the planet floods first. The city is a blaze of light 24 hours a day – so many lights it doesn’t seem to matter whether they’re energy-saving lamps or not – for the month of the year with the most sun. A festival is always a heterotopia, a space of alterity where normal rules don’t apply, a space of excess and celebration and consumption – which is wonderful! – but a month-long conglomeration of festivals means a month where extraordinary levels of production and consumption are expected to be sustained and can’t be sustained. You can’t live that way for that long. It’s psychologically, spiritually, financially and environmentally exhausting: it drains you til there’s nothing left.

And just to dwell in the negativity for a bit longer: let’s admit the extent of the crisis. We know we’re burning up. We’re shooting past emissions reductions targets. Forests are still being chopped down, rare earth metal and fossil fuel supplies are still being exhausted, sea levels are rising along with climate refugee numbers, coral is bleaching, ice is melting: every alarm bell is ringing and most of us, myself included, only make it through the day by stopping our ear s. I spent summers in my 20s camping in fields plotting how to shut down power stations and banks, and I’ve stopped doing that not because I don’t believe in it but because I’m struggling to see how those actions can halt a crisis of this scale, and ignoring the problem seems more liveable than engaging it.

So why my work, and why this Award? If everything’s so bad, why am I supporting engaging with it? If the Fringe is so bad, why celebrate it?

The truth is, I’m not remotely interested in labelling things as bad. I think that social movements – and the environmental movement in particular – is overly invested in a destructively puritan ethics of individual guilt and culpability, in prescribing and proscribing actions that will clean up your personal moral slate so you can feel better about yourself. The boycott has moved from being an insurgent tactic of economic transformation to an individual decision about what product choices best reflect your self-identity. The dominant message the environmental movement has succeeded in getting across is not “Oil companies and banks and airlines are literally destroying the earth, let’s rise together to get rid of them” but rather “Change your lightbulbs and separate your rubbish or you’re a bad person”. (I haven’t done the maths, but I’d bet at least a tenner that if everyone household in the world switched to energy-saving lightbulbs we still wouldn’t stay below a two degree temperature rise.) So I have no interest in condemning artists and audiences who participate in the Fringe, or indeed Fringe Festival Society staff, many of whom I know well and have worked with, many of whom see exactly the same problems and feel the same level of powerlessness in fixing it. (Landlords, on the other hand…) I’ve avoided the Fringe this year because I’m tired, not because I think it’s bad.

In fact, trying to do sustainable practice at the Fringe is emblematic of trying to sustain life on this planet: it’s a struggle against huge economic and political forces it seems impossible to influence, it’s a struggle participating in which makes you feel dirty and compromised and often hopeless, and it’s also the only choice we have, because there isn’t another planet. It is worth participating in this struggle. There is no outside. There is no escape. There is no being pure. There is only working with the conditions you’ve got now, trying to make something better. The challenge of sustainability in any context is not how to make yourself the most pure, the most blessed by the green beard in the sky, the most enthusiastic about telling people how to change lightbulbs, but how to stick a spanner in the works of a death machine without getting crushed yourself.

Before announcing the award, and congratulating the people who’ve risen that challenge, I’m going to finish with a poem. I’m already feeling that these words are clumsy and don’t quite say what I wanted them to say. Prose is too literal, too easily excerpted and quoted and misquoted, at least the way I write it. This poem is a story I wrote for my friend, the theate critic Maddy Costa, and it’s about everything I’ve just been talking about.

THE LONGING FOR ONE THING INSIDE OF ANOTHER

There was a world where tokens were exchanged

for food, and when a token met your hand

a spur extended blandly into your palm

to take a sip of blood. This payment kept

the tokens bright enough to check your hair in,

cool enough to glide from purse to purse.

And in this world there were two friends who made

assemblages of wood and steel: stairways,

to pause on, things to touch. They worked apart,

and then from time to time they met to look

One day one friend came with a gift, a question.

They bought some time discussing techniques, and then

they said, “I heard your purse was light. I saw

your building shed was empty and your tools

were sore for oil.” And they held out their hand

Now, both these friends were just the kind of folk

to argue far too hard about the way

things are on other worlds, or could be, or were,

and how to cross between them without snapping

painful laws of space and time. At times,

they held that wood and steel could build a bridge

to where a body could eat without blood.

And so they laughed as they watched the sixteen tokens

pass from palm to palm and felt the prick

and wiped the reddish smears on the handkerchiefs

that all folk carry tucked in their back pocket,

the depth of dye declaring the force of the flag.