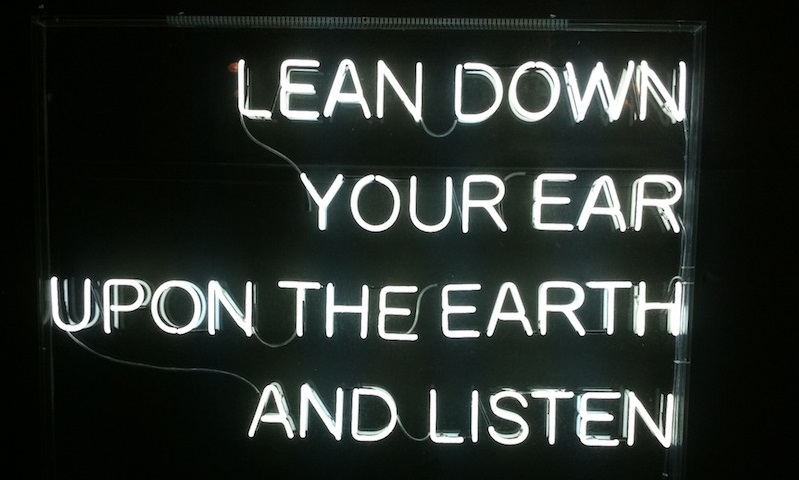 Between July – October this year Creative Carbon Scotland supported the development of Blue Cow, a new performance work by Edinburgh-based theatre maker Alice Mary Cooper. Here we share a bit about what took place and what was learnt in the process.

Context and aims of the project

Blue Cow has evolved out of Alice’s engagement with a scientific report, published in 2010, which gathered extensive data on the experiences of people living near contaminated land in Sydney, Australia (her home city). One of Alice’s initial motivations for developing Blue Cow was to make more visible the psychological and social implications of land contamination for individuals, families and communities.

During the development period Alice invited dramaturg (see definition here!) Caitlin Skinner, composer Thomas Butler, video designer Rob Jones and visual artist Valerie Reid to explore the sonic and visual possibilities of the Blue Cow. A key question addressed was how cultural practitioners can contribute to a wider cultural shift towards a more environmentally sustainable society. This directly related to one of Creative Carbon Scotland’s key areas of work – culture/SHIFT.

culture/SHIFT is a developing framework for a series of projects and events which seek to explore and promote the role of culture in addressing climate change and sustainability. It is currently guided by four themes, the second of which was of particular interest to the development of Blue Cow:

Over the summer and autumn the group undertook a range of performance-based exercises, site visits and meetings with practitioners working in Edinburgh including Ruth Wolstenholme (Managing Director of Sniffer, which delivers the Adaptation Scotland programme) and Kate Wimpress (Director of North Edinburgh Arts). Alice also attended plays shortlisted for the 2017 Edinburgh Fringe Sustainable Practice Award and the Modify/Adapt Symposium at the Wellcome Collection in London to understand how other artists were engaging in the area.

There were four immediate outcomes which emerged from this process:

To widen engagement with the project, Creative Carbon Scotland invited performing arts and sustainability practitioners based in Edinburgh to a Green Tease event in late October – Acting for a Sustainable City. Amongst the participants were Imaginate, Catherine Wheels Theatre Company, Historic Environment Scotland, independent theatre makers and producers.

In the first half of the session, Creative Carbon Scotland Director Ben Twist interviewed Alice and her collaborators to understand the methods employed and key learning gained during the development weeks, and to think about how this learning could be applied more widely. Points discussed included:

Participants were invited to work in small groups to (quickly!) put this learning into practice and generate new ideas for performing arts-based projects which could address sustainability-related issues in Edinburgh, whilst thinking through the combination of audience, artistic form and content. The ideas generated included… 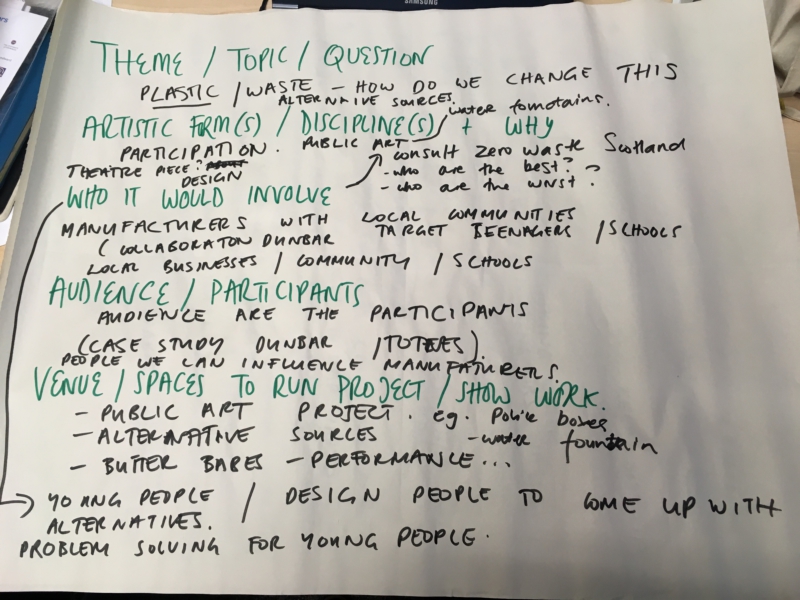 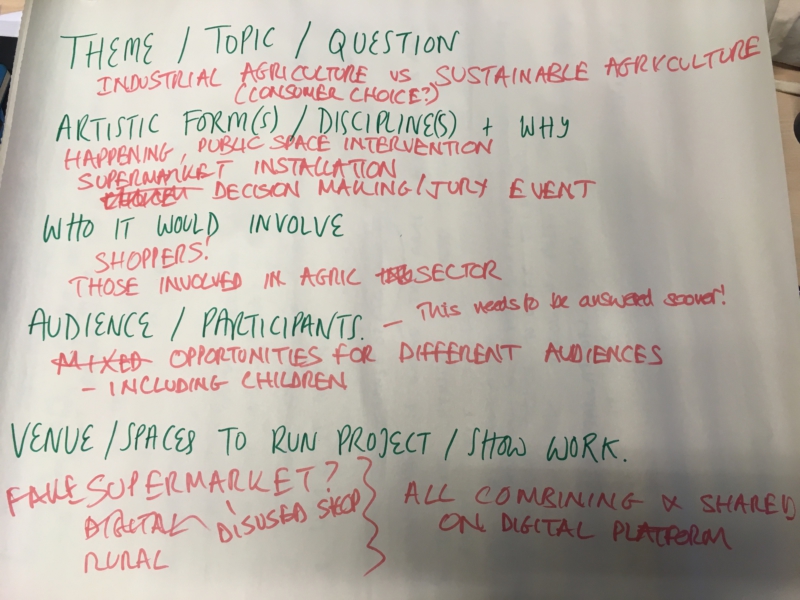 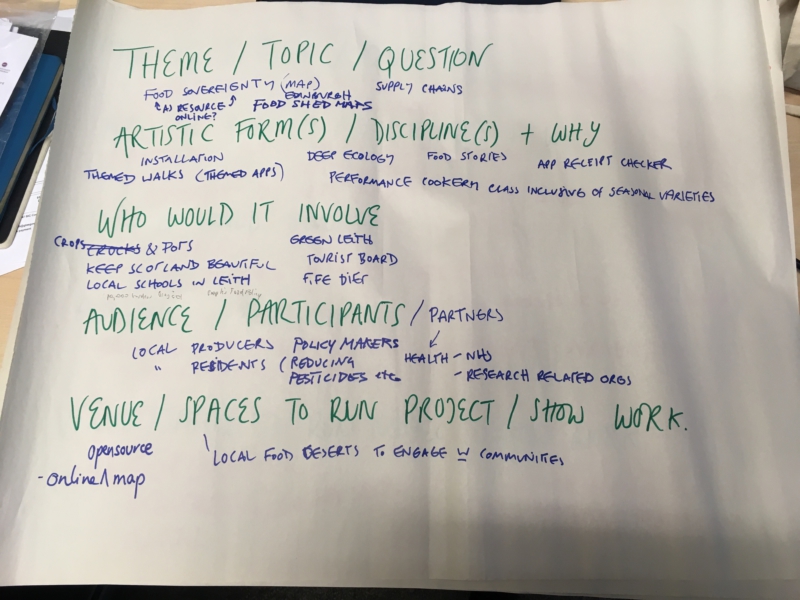 There were interesting parallels in all three of the proposals in the fact that they were all publicly-sited and took on a participatory nature. The exercise surfaced the question of the different potential forms of engagement achieved through spectatorship and participation in relation to sustainability and climate change. It also revealed that in the changing of one of the three factors, the other two would inevitably also change, and the challenge of bringing all three together successfully.

The Green Tease event enabled all project partners to reflect on the process and build our joint understandings of opportunities for working at the intersection between performing arts, sustainability and climate change. New connections were made during the event which Creative Carbon Scotland will continue to pursue through Green Tease and the culture/SHIFT programme and Alice and her collaborators are continuing to seek opportunities for the further development of Blue Cow with the aim of touring the work in the future.

“It was incredibly beneficial to partner with Creative Carbon Scotland on this City of Edinburgh Council supported development which enabled me to work with four artists and look at the complex subject matter together for the first time. This new collaboration was exciting as it opened up the possibilities of what the performance could be, breathing life into areas I had previously dismissed, and reaffirmed the value of the original source material in developing the work.

The culture/SHIFT programme provided a useful framework for creating the work and outward facing action to strive for during its development. Partnering with Creative Carbon Scotland provided access to people and groups who were influential both to this development process, and I have no doubt, in Blue Cow’s future.

It was very encouraging to see so many people engage with both the project and its wider theme of art as a change maker at the Green Tease event. I feel fortunate to have had this opportunity to undertake such a well-supported development from both Creative Carbon Scotland and City of Edinburgh Council which has given me the confidence to embark on further development and production of Blue Cow.”

What some Green Tease participants found most useful about the event

“Hearing from, and connecting with others with similar concerns about the environment, who are also theatre practitioners. Making new contacts in this field. Solidarity”

“Insights and inroads into Art and Sustainability working together, with a practical example that I can take forward. New contacts. Pointers to funding.”

Green Tease is an ongoing informal events programme which connects creative practices and environmental sustainability. Our Green Tease Open Call is here to support cultural and sustainability practitioners and orgnisations to run your own events with support from Creative Carbon Scotland.

Find out more about previous and upcoming events and how you can get involved in the Green Tease network.