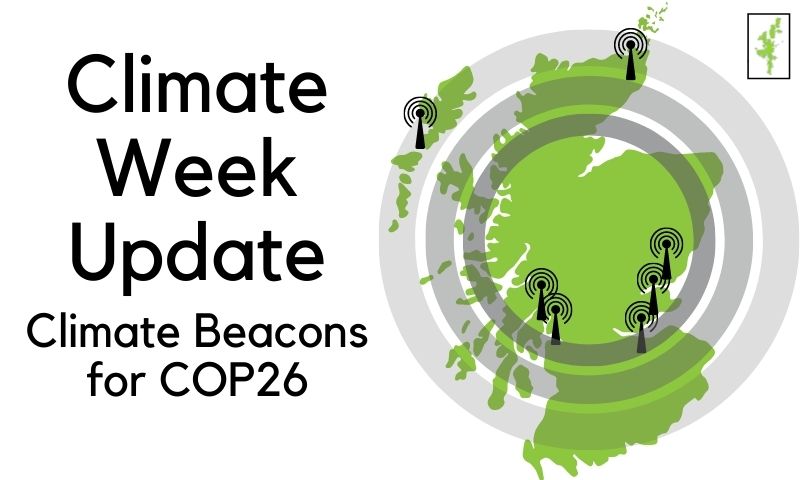 It's Scottish Climate Week and the COP26 climate talks are now less than two months away, so here's an update on what the Climate Beacons have been up to and what they are planning for the months ahead.

In Argyll, Cove Park and ACT have announced a whole series of events and activities taking place across the coming months, including creative workshops, climate cafes, school events, a new film commission, and the community planting of a ‘micro-rainforest’ on the Cove Park site.

They currently have a callout for artists to apply for an Artists in Schools Residency and for their Saturday Studios/Argyll Beacon workshops. Follow the links for more information about both of these opportunities. 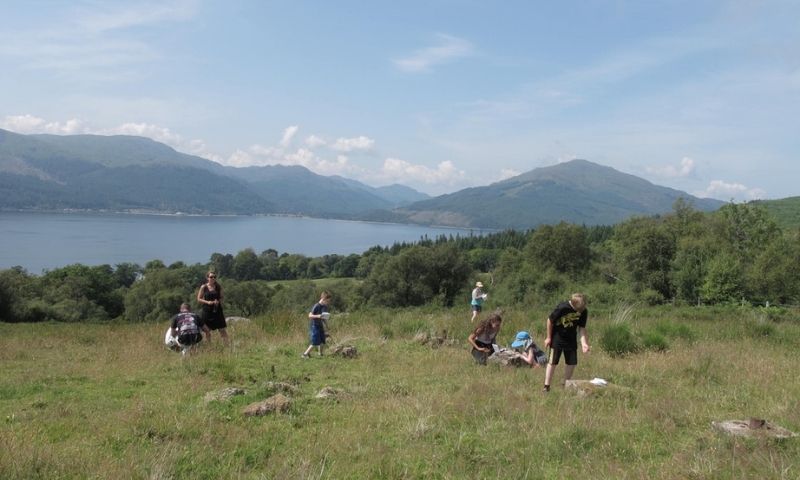 A workshop held at Cove Park. Photography by Caitlin Hegney.

The Caithness and East Sutherland Beacon have announced their Beacon plans under the heading ‘The Land For Those Who Work It’.

They are excited to be hosting The People’s Palace of Possibility with The Bare Project and Centre for the Understanding of Sustainable Prosperity. The People’s Palace of Possibility will recruit Palace Citizens, made up of young people and local groups, to challenge the prevailing consensus on land and climate justice through radical acts of imagination. They will also be launching a podcast of discussions and artist radio broadcasts and a travelling community cinema across Caithness and Sutherland.

For more updates on the Caithness and East Sutherland Beacon, visit the Timespan or Lyth Arts Centre websites or social media. 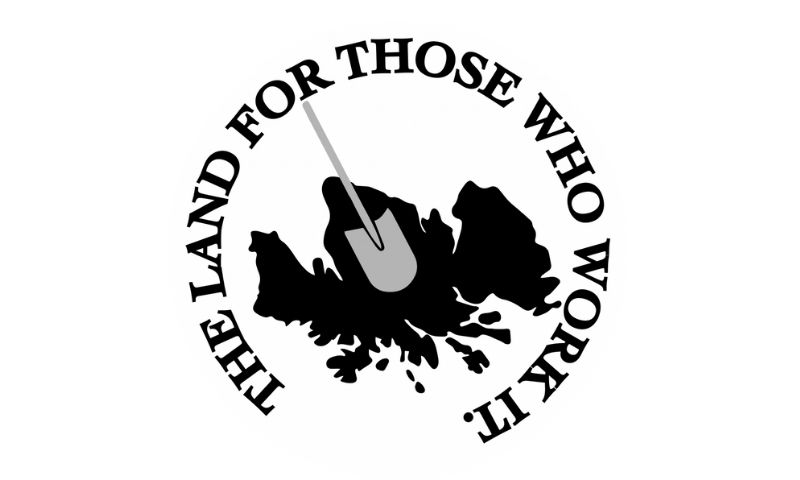 The Land For Those Who Work It logo.

The Leven programme, ONFife and Levenmouth Academy have been pleased to welcome two visitors to the Fife Beacon in recent months.

First, from ‘human swan’ Sacha Dench, who is flying an electric paramotor all around Britain to raise awareness about the impacts of climate change and potential of fossil fuel free transport.

Second, representatives from the Fife Beacon met with Scottish culture minister Jenny Gilruth for a walk along a disused former industrial site by the river Leven, which they are hoping to regenerate into an outdoor community space. 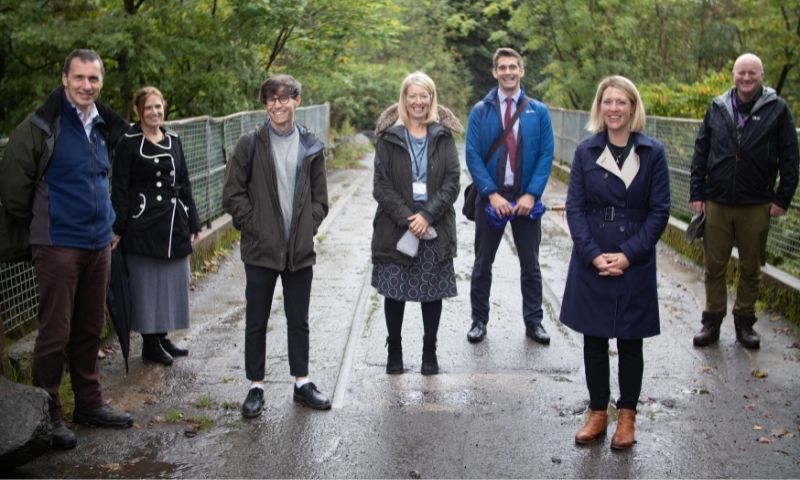 The Inverclyde Beacon have been working together on a wide range of plans. They held a workshop with artist Eve Mosher, crafting dissolvable paper boats loaded with marine seeds, which were floated out into the Clyde to support the replenishment of the ecosystem.

Lots more events are planned for the near future so visit the Beacon Arts Centre website and social media to see what’s coming up. 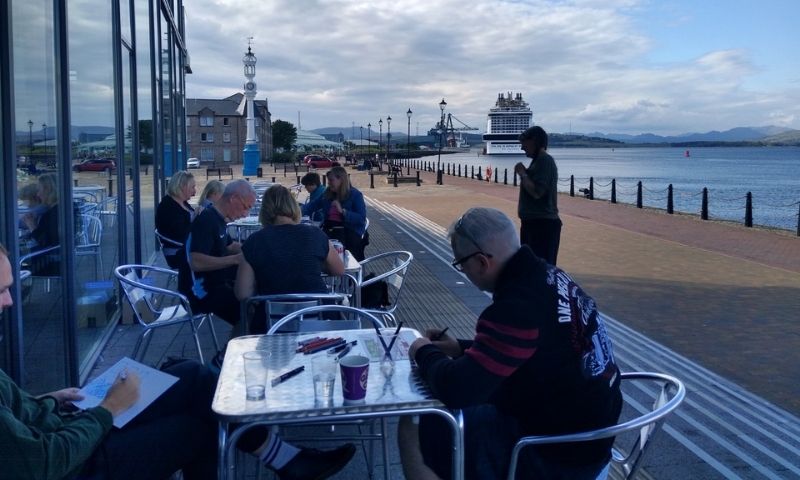 Participants in the workshop with Eve Mosher held at Beacon Arts Centre.

In Midlothian, the National Mining Museum and British Geological Survey have launched a brand new STEM climate change workshop for primary schools, which combines science with art for a free and interactive event. Future plans include an exhibition ‘Climate Change: The Carbon Cycle’ and the participatory creation of a clay sculpture.

There will also be events, including ‘Witness Reports’, a three-day event organised with Scottish Communities Climate Action Network and the Environmental Justice Foundation held from 5th-7th November, and an online conference taking place on 12th November, the last day of COP26. The current programme for the Beacon is available on the National Mining Museum website. 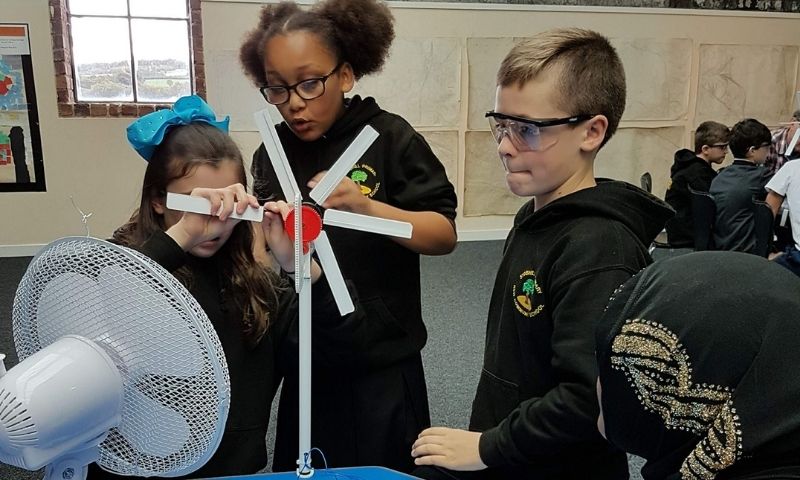 Participants in a STEM workshop.

The Outer Hebrides Climate Beacon hit the ground running with creative community mapping workshops held in Uist. The mapping project uses maps of localities to obtain information about climate change impacts as experienced by community residents. It has been piloted at the Hebrides International Film Festival and in remote communities in Uist by utilising the Western Isles Libraries Mobile Library.

The Message In a Bottle project, headed by Taigh Chearsabhagh museum and arts centre, is also being launched. This is a participatory multi-media art project inviting people across the world, especially those in island and coastal communities, and especially young people and families, to create messages in bottles to be delivered to COP26, the UN Climate Change Conference in Glasgow, November 2021. You can find out more about how to get involved on their website.

Western Isles Libraries have been setting up ‘Climate Corners’ in each of their branches and are running a ‘Design for the Future’ competition for P4 to P7 and S1 to S4 pupils. You can find out more about their plans on their website and read a blog here. 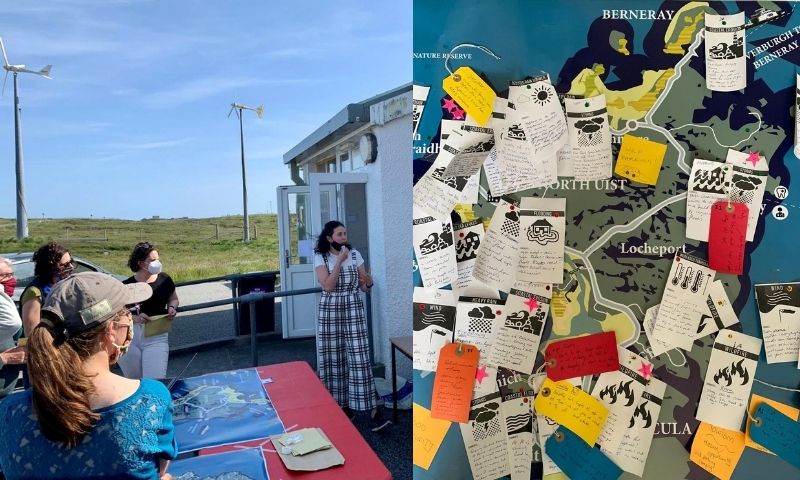 Left: participants in a mapping workshop. Right: an image of the map with annotations added by participants.

In Tayside, representatives of arts organisations, museums, universities, climate activists, local organisers, council employees across the Tayside region came together as part of a series of design thinking workshops. They used the process to share ideas and take the first steps in putting together an ambitious plan for climate crisis focused activity over the next year. More on these plans will be announced very soon.

To get involved in the Tayside Climate Beacon contact Anna Hodgart. 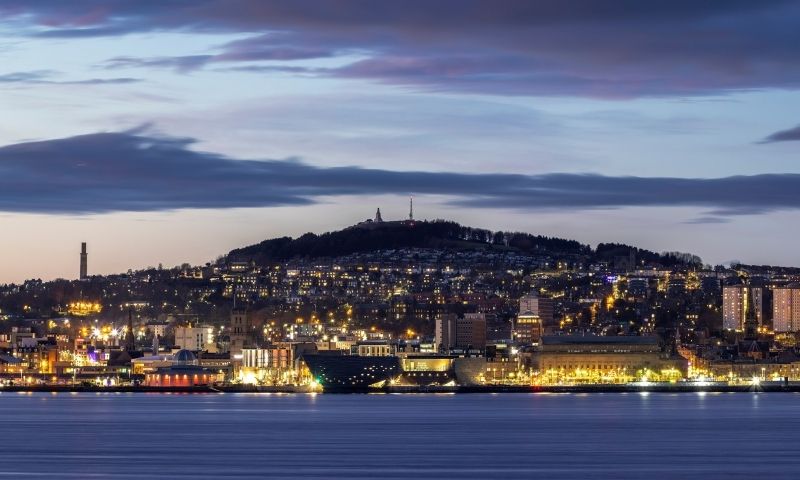 For more information about the Climate Beacons for COP26 project, visit www.climatebeacons.com. Many people from arts and culture are keen to get involved with making the most...