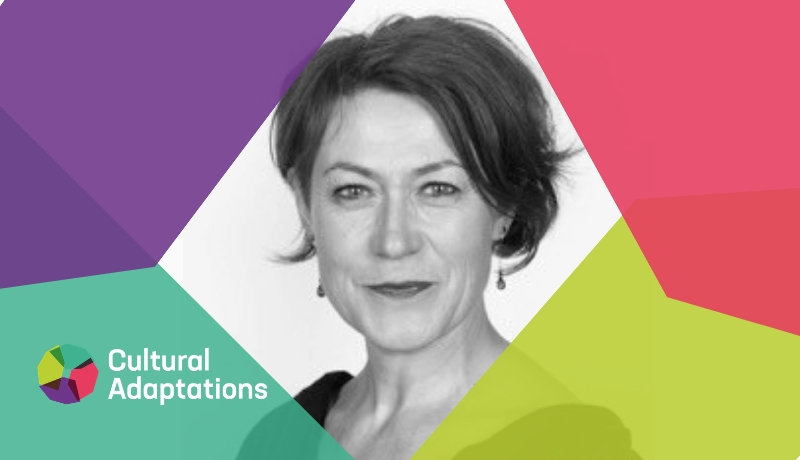 The Embedded Artist to work with Climate Ready Clyde and Creative Carbon Scotland as part of the Cultural Adaptations project has been announced!

A writer and theatre producer has been tasked with adding creativity into how the Glasgow City Region adapts to the impacts of climate change. Lesley Anne Rose will help ensure that transformative cultural shifts as well as dramatic technological and infrastructural changes enable the region to deal with the present and future impacts of our climate crisis.

This Embedded Artist commission has been announced as part of Cultural Adaptations, a project co-funded by the European Union’s Creative Europe programme and the Scottish Government, The project will see embedded artists working in the Glasgow, Gothenburg, Ghent and Dublin city regions to bring creative solutions as they deal with the intense rainfall and other impacts increasingly being brought about by climate change.

Not commonplace in the climate change adaptation world

Lesley Anne will be working within the Climate Ready Clyde initiative – a coalition of thirteen organisations including six local councils, transport agencies, universities and government agencies – with support from Creative Carbon Scotland who are leading the Cultural Adaptations project. Climate Ready Clyde is excited to be bringing in Lesley Anne’s skills as a theatre producer, playwright and experience in senior roles with Aberdeen Performing Arts. Such skills and experience are not commonplace in the climate change adaptation world, which is expected to benefit from the creativity, curiosity and methods for building collaboration which an embedded artist can bring.

Lesley Anne joins the project in the same week as the first meeting of Glasgow City Council’s new “Climate Emergency Working Group”, further highlighting the multiple approaches needed both to avert a growing climate crisis, and create societies able to live with the consequences caused by present and past emissions.

James Curran, Independent Chair of Climate Ready Clyde, whose report released in October 2018 showed that vital roads, bridges, rail lines and hospitals in the region are at significant risk of being damaged or closed by climate change, said:

“Building resilience to the impacts of climate change requires us to think very differently about the way we approach the development of the City Region, to ensure we adapt in a way which supports the City Region to prosper and ensure that impacts do not disproportionately affect the most vulnerable. We’re looking forward to working with Lesley Anne to help us think differently and raise our ambitions as we prepare Glasgow City Region’s first adaptation strategy and action plan”.

Lesley Anne Rose, who was chosen from a strong field of creative practitioners, commented:

“I look forward to playing a meaningful role in this project and the region. For the past few years I’ve sought ways that the cultural sector can contribute to the process of adaptation and challenges and opportunities this will bring. Bringing my skills and experience into the work of Climate Ready Clyde will I hope help realise the transformational changes that the climate crisis demands.”

“This is an exciting step in this ambitious project. We’re proud to be leading this project which brings together some of the most forward thinking cultural and adaptation organisations in Europe and we see it having the potential to significantly change perceptions of how the arts can, and do, help people to think differently.”

The Embedded Artists will come together for the first time in March as the project partners gather in Glasgow. as part of the project’s first transnational workshop. The gathering in Glasgow will also see the beginning of the project’s parallel strand, with the first in a series of workshops for managers from arts & cultural organisations on Tuesday 19th March to develop tools to help the sector when planning for climate change impacts. Artists, sustainability professionals and those interested in building links between these two areas can attend an evening ‘Green Tease’ on Monday 18 March to hear from local and international partners and discuss this developing project.

Find out about opportunities for participation, and the project’s international conference in Glasgow in 2020, by registering on the Cultural Adaptations website.

Cultural Adaptations seeks to find creative, innovative and place-based responses to climate change impacts, equipping cultural organisations and cities with the knowledge and skills they need to create a positive future. The project, running from October 2018 – March 2021, is co-funded by the European Union’s Creative Europe programme with match-funding from Scottish Government.