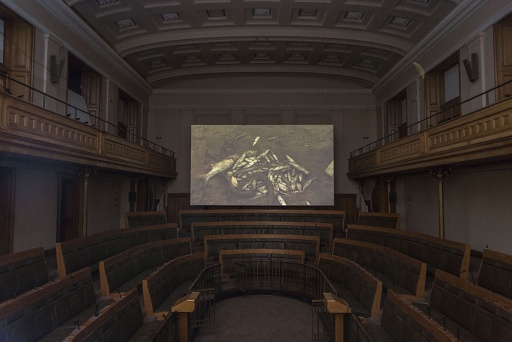 Ben Twist, director of Creative Carbon Scotland, led a discussion that explored various artistic and curatorial conflicts that might occur when considering sustainability – particularly those concerning the transportation of artworks across the world, and as part of international exhibitions. These conflicts were discussed in the real-life context of the Where Do I End And You Begin exhibition at the City Art Centre: commissioned as part of the 2014 Edinburgh Art Festival.

The group of 70 Edinburgh College of Art students were encouraged to reflect on the challenges  curators or artists may face when designing a commissioned exhibition of a similar scale. In this, they were able to explore the various pressures, concerns and opportunities resultant from the inclusion of sustainability at each point of exhibition design.

One of the examples discussed wasthe multimedia work, The Sovereign Forest by Amar Kanwar, and the choices relating to its exhibition space. As the work was too extensive for the City Art Centre, it was instead exhibited in the Old Royal High School – a highly relevant site to the sovereignty and government themes of the work– although a removed site from the initial exhibition. Students were asked to think through the financial, environmental and organisational costs of this decision, and reason their own choice of venue. Different groups within the ECA collective provided contrasting decisions, with those for the change of venue citing the extra costs as necessary to showcase the work to its full scale and effect. However, it was also proposed that instead the work should be shown in a location more pre-disposed to the multimedia set up (such as a cinema), though at a diminished scale. 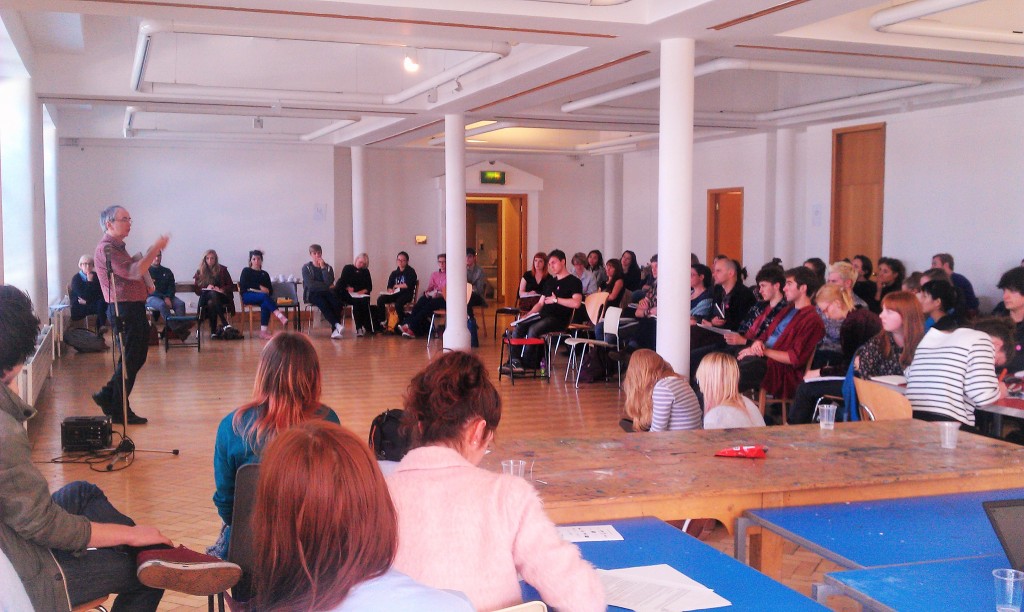 We also heard from Sorcha Carey, director of the Edinburgh Art Festival, as to why the decision to host the work at the Royal High School was made. Sorcha explained that the experience of the viewer, and the richness or clarity of viewing the entire work in an appropriate space, was balanced against the cost associated with hosting another building. She also went on to highlight the social reasons for using the building, which is largely otherwise inaccessible to the public, and soon to become a commercial property. In considering that reopening of Edinburgh sites, like the Old Royal High School, to the public is a significant aim of the festival, we were able to appreciate the use of an already constructed environment and exhibit enriching the location outside of the festival:

“There is something bigger happening than the artwork”.

Also very present in the discussion was the idea of the integrity of an artwork, and how this might be impacted by measures taken to affect the environmental sustainability of its exhibition. The group discussed Johannesburg-based Kay Hassan’s installation piece My Father’s Music Room, in which Hassan comments on contemporary South African society through a mix of mediums, including a large selection of vinyl records. An inconclusive vote as to whether the work could have been recreated in Scotland (with the same records sourced in Scottish music and charity shops) highlighted how we value origin and authenticity when it comes to art. Many expressed how the artwork would be altered if its components were sourced differently, with Sorcha emphasising the generational significance of the records owned and traded in South Africa: a collective history evidenced through the work. Curator Jane Connarty also challenged us to consider how the work may have differed if produced during a residency in Scotland, and how the site of artwork creation can impact an exhibited product.

As the discussion developed, it became clear that carbon emissions and sustainability is another concern to be considered by curators and artists, but one which must be equated with practical, technical, spatial and aesthetic concerns. As artist and curator Kathleen Ritter highlighted, often the budget of an exhibition is its biggest constraint, but also potentially its biggest incentive to reconsider curatorial design and transportation of works – both which have a major impact on the environmental sustainability of the final exhibition. Ultimately, it is only in the decision to treat each work individually, and to develop compromises between the artist, the curatorial vison and the limiting factors, that the environmental impact of international exhibitions will be reduced.

Creative Carbon Scotland has been working with Edinburgh Art Festival and their Where do I end and you begin exhibition to better understand the environmental impact of large scale and international visual arts exhibitions. Click here to find out more about the project.