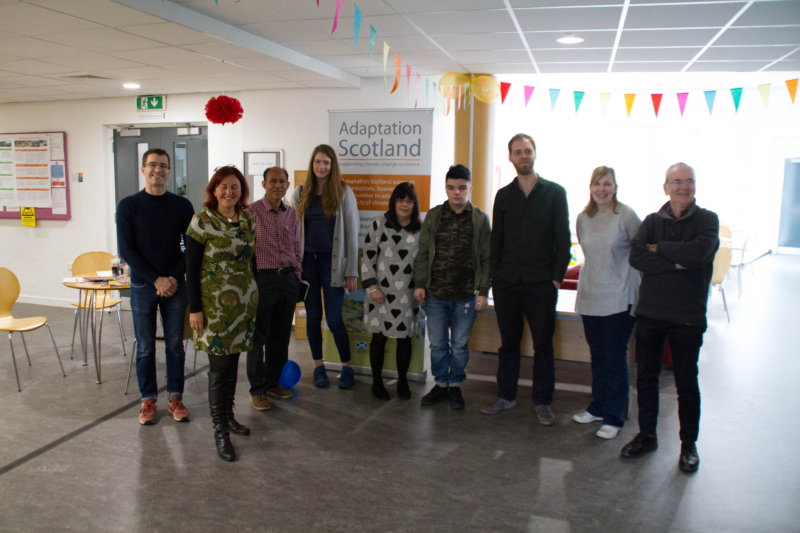 This past weekend CCS co-ran an Arts & Climate Change mini-festival in Middlefield, Aberdeen, as part of a new initiative …

This past weekend CCS co-ran an Arts & Climate Change mini-festival in Middlefield, Aberdeen, as part of a new initiative exploring how the arts can contribute to community engagement in climate change adaptation. Sociologist and collaborator, Dr Leslie Mabon, shares some initial reflections on the day – re-posted from the Urban Green Adaptation Diary.

Early Saturday morning I was pedaling furiously across Aberdeen in a north-westerly direction, through the grounds of the Royal Cornhill Hospital (pleasant), over North Anderson Drive (scary), and along Provost Rust Drive (downhill and therefore fun). The destination was the Middlefield Community Hub, where I joined Creative Carbon Scotland, Adaptation Scotland, Sniffer and Aberdeen City Council for a one-day mini-festival on Arts and Climate Change. The purpose of the festival was to engage with the community on climate change adaptation through the lens of art. 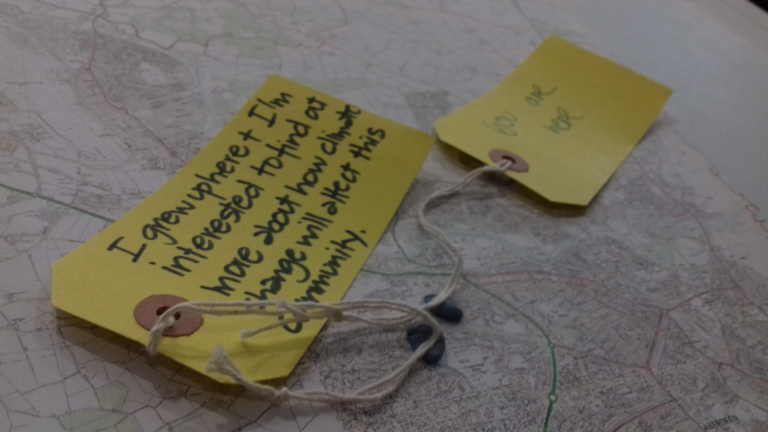 Where people have come from and why they are here

By way of background, Aberdeen is currently strengthening its climate change adaptation thinking via the Aberdeen Adapts initiative, run jointly between Aberdeen City Council and University of Aberdeen. One of the main purposes of the day was to develop understanding of what Aberdeen Adapts is doing and how citizens can get involved. The community we were holding the festival in – Middlefield – is also about to see quite significant investment in greenspace development, supported by the European Regional Development Fund. Hence this is a good time to be thinking about what climate change adaptation means in the context of daily living, and how we can develop decision-making processes that engage communities and deliver climate adaptation benefits equitably across the city.

Over the course of the day we had three workshops. First, musician Simon Gall used old Doric (the local language in Aberdeen) rhymes and songs to get us to think about how we represent trends, events and processes in society and culture, which led into us writing short lyrics of our own about how we might understand changes in the climate. Then, Jo Hodges and Robbie Coleman brought us the Museum of Future Middlefield, where we were given objects, a year, and a bit of social context, and worked in teams to write a narrative as to what that object did in relation to climate change that led to it being in the Museum of Future Middlefield in the Year 3000. Lastly, Alice Mary Cooper led a theatre-based session, in which we used the metaphor of a suitcase to imagine not only what possessions we would take in an evacuation emergency, but also what personal and community qualities Middlefield could offer to Aberdeen more widely in a climate event. 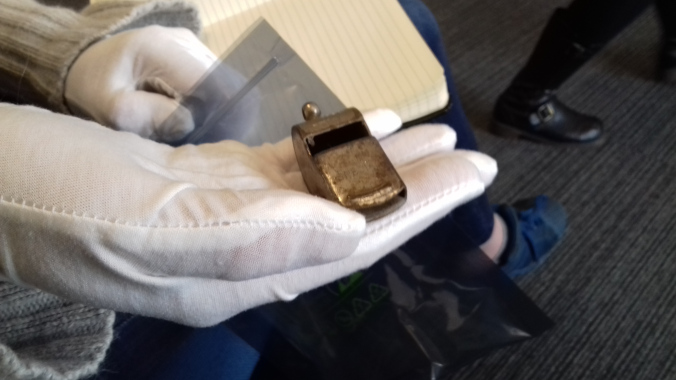 Museum of Future Middlefield – what did this whistle do for climate change adaptation?

Our role at RGU was to be involved in this process to evaluate its potential in sparking discussions on climate change adaptation. Rather than an in-depth report of the day, I’d therefore like to offer just a few initial thoughts that struck me over the course of the workshops:

-people intuitively know a lot about where they live, both in terms of climate and the physical environment (where risk is, what the effects are) and also the social dynamics (who is vulnerable, how community is organised etc). There is still a bit of an assumption out there – I think – that the public need to be ‘educated’ about climate change. Yet the contributions from the workshop participants show there is a lot of knowledge there about Middlefield as a place, and that this knowledge helps imagine what climate change might mean for the local area in a more contextualised way than I ever could. Art can be a very powerful and effective way of drawing this out;

-related to the above is the value of art in facilitating discussion between sectors. What I found very motivating about the day was that the ‘experts’ (as Simon called us!) participated fully in all the sessions, making personal and creative contributions of their own. Especially in the last session, we got some excellent discussion going across the whole room as a result. The artists were brilliant at facilitating this – and it also helped that the ‘experts’ were perhaps prepared to step outside their comfort zone a bit and participate as individual people rather than representatives of their organisations!

-third, we often don’t pay enough attention to the fact that societal engagement is a messy process. Not literally, but in terms of all the ‘behind the scenes’ work that goes on – the improvisation on the day, the out-of-hours and weekend working, the way we adapt to the spaces we work in on the hoof. It is important that we embrace this messiness and acknowledge it as an inevitable part of community work rather than trying to create standardised, one-size-fits-all solutions for community engagement;

-lastly, when it comes to climate change, art isn’t just a way of visualising ‘the science’. Rather, it brings a whole different way of thinking about what the problems are, what the potential solutions might be and – crucially in my view – helps us to think about how we might get there. All three sessions really played on this idea of art as a stimulus for thinking about the future, in a much more engaging way than the kind of scenario-based exercises with maps and worksheets that I would have done could ever do! 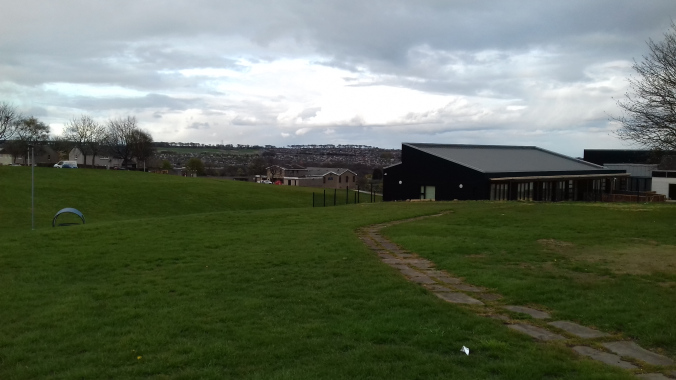 Middlefield Community Hub, and some greenspace in the regeneration plan

Although the mini-festival itself was a one-day event, we see this as the start rather than the end of thinking about the implications of climate change on daily living in Middlefield and Aberdeen more widely. The next steps are to formally evaluate the event, and for RGU to undertake some follow-up interviews. We will have more to report in due course!

More information on the climate change adaptation in Aberdeen can be found here.

Thanks to Leslie for sharing his blog on the CCS site! Interested in learning more about climate change adaptation? Have a read of CCS Director, Ben Twist’s, most recent Stategy Blog.

The Arts & Adaptation project in Aberdeen is delivered as part of the Adaptation Scotland programme, funded by Scottish Government and is run in partnership with Sniffer, Aberdeen Adapts/Aberdeen City Council and Robert Gordon University.