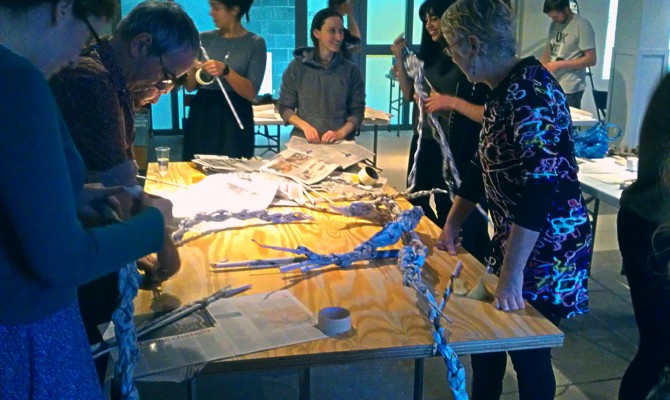 Our Glasgow Green Tease group had their September meeting on Thursday 25th September 2014 at the Glasgow Sculpture Studios, by the Forth and Clyde Canal. In an active session, the group worked with found materials to reflect on their use in the creative process.

Teena Gould, a ceramist with a strong background in public and community art, led discussion and action during the event, drawing from her practice of the use of earth, water, air and fire elements in her chosen medium. Teena explained how she often works with materials that would otherwise be discarded, having served their original purpose. She discussed the subjective concept of ‘rubbish’ in the context of creative materials, demonstrating how popularly perceived ‘waste products’ like sawdust have huge potential under alternative conditions: for energy and for creativity.

Teena also mentioned how these concepts fitted within her own work and how clay, as a material sourced from the earth, can very easily be returned to its initial state if not sealed through glazing. This in turn highlighted consideration of the creative life-cycle, and the longevity of found or ‘rubbish’ materials: their potential impermanence a feature, rather than a hindrance.

After this short discussion, the more practical aspect of the event began. The group was shown some images of the paper kiln making process, whilst Teena described how the structures form, and how this is an effective method of firing clay. Members of the group – which included a range of individual artists and those with an interest in sustainability – then chose between creating a small clay object, or creating the body of the paper kiln: 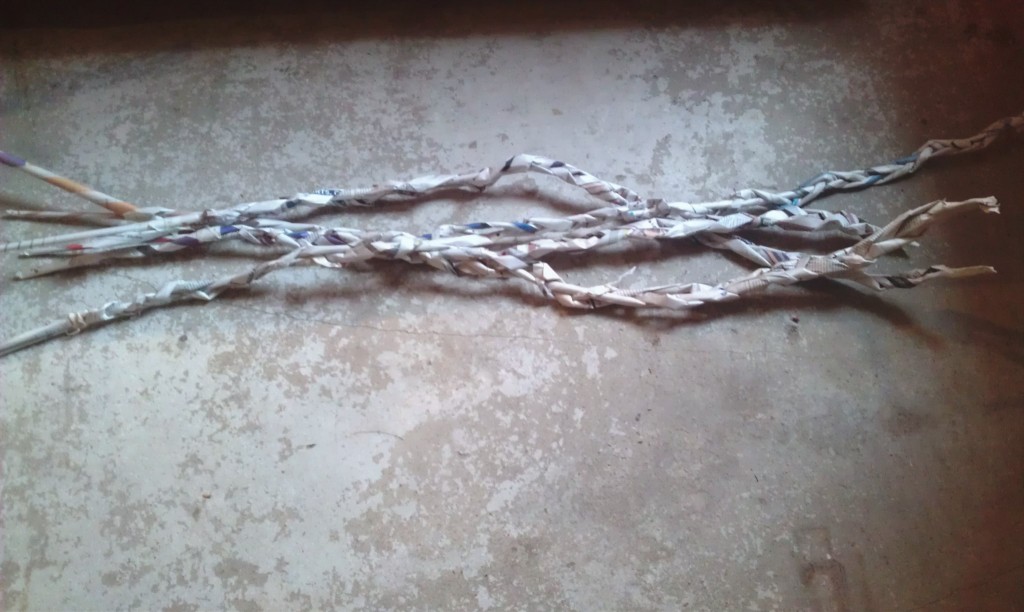 A range of clay objects were produced during the two-hour session: everything from egg cups and plates, to free-form shapes and some of the most detailed nature. Throughout the activities, Teena’s ‘Coastal Ceramics’ film was shown to provide context and ideas.

The whole group worked collectively on the paper kiln to create a single shared product – and although there were around 20 people creating and plaiting the paper shapes, the kiln was only partially complete by the end of the time: evidencing to the group how intensive a process it is, and how the social aspect of making was also necessary in this case.

In discussing this community creation, Teena also highlighted how the eventual firing (and thus, destruction) of the kiln acts as a collective reward and an intensely social gathering at the end of the process. Creative Carbon Scotland hopes to help realise this in a few weeks time for the November Glasgow Green Tease: reuniting people, made objects and a completed kiln for a fun and seasonal revisiting of the theme. Keep an eye on our events page in the coming weeks!