‘Good Luck, Everybody’ – the theatres of ArtCOP Scotland: Part II

In this ArtCOP Scotland series, we asked Wallace Heim to write a contextualising essay of how a changing climate was expressed during two weeks of performances, workshops and exhibitions and what this might mean.

‘BY LEAVES WE LIVE’ AND BY TREE, ANIMAL, ENERGY

In addressing the carbon facts of climate change, the intimate, emotive and perplexing relations between the human and the other-than-human can be side-lined, out of reach of measurement and calculation. But these relations are inseparable from how the climate, and the human, is known. Stories, walks and installations continued the long-lived strand of performance about nature and human relations, in historical and contemporary performance forms.

Patrick Geddes’ passage on inter-relation inspired a slow, very slow walk in the garden of Dunbar’s Close, Edinburgh, led by Karen Gabbitas. Geddes wrote ‘This is a green world, with animals comparatively few and small, and all dependent on the leaves. By leaves we live…’ As an interior rhythm, the words ‘by leaves we live’, accompanied the conscious step as it became less than conscious, as walkers connected within an urban garden and to the effects of slowing down. The event was completed by a walk out of the close, to a reading of poetry about gardens, walking and the environment by Andrew Sclater. 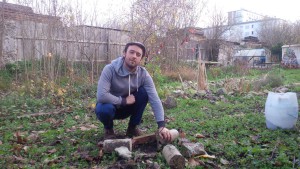 In Huntly, with Deveron Arts, the White Wood was planted by Caroline Wendling and the community earlier in 2015, a wood that included oaks grown from acorns from Joseph Beuys’ 7000 Oaks. Storyteller Ben Macfadyen’s residency continues the project and connected Huntly directly with Paris in a hybrid of theatre and social practice that has characterised much of the innovative work relating performance and ecology. Ben, with a Beuys’ oak seedling, bicycled to Paris (from the ONCA Gallery in Brighton, also hosting weeks of workshops and seminars on climate change). The tree was planted in a protected new woodland near Paris. On returning to Huntly, Ben will continue The White Wood Story, working with the community to develop a story of the wood, trees, and peace-making that will last for 300 years, the span of the first stage of growth for an oak.

A convivial evening of stories about trees at the Scottish Storytelling Centre, harkened by the shaking of the bells on the branches of a pine, brought out tales of how human relations with trees expose human folly and are redemptive. The evening itself was like coming in to an extended family that just enjoyed the telling and listening, blurring performer and audience. In a somewhat chaotic group movement/ritual, the meeting in Paris was extended a collective energy before the evening came back to the long duration of trees and human stories.

Exercising a more troubled relation between the human and animal, Dougie Strang’s solo performance piece Badger Dissonance, part of the UNFIX programme at the CCA, Glasgow, invoked familiar but undomesticated animals with whom the human finds identity and meaning. This was, though, the animal as road kill, the shot and culled animal, including, too, Jyoti Singh, the woman raped and murdered by a gang in a bus in Delhi in 2012. ‘Cognitive dissonance’ is the concept that Strang used to explain disjointed human behaviour. ‘Dissonant’ explained, too, the unknowable and uncontrollable behaviour of the badger, fox, deer, rabbit, the buried and the unburied animal, disturbing human expectations. 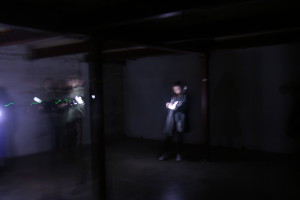 The ecological also includes human relations with the inanimate, the materials, elements and energies of environments. In Light Field, in a dark room, Saffy Setohy and Bill Thompson experimented with giving people devices with wind-up torches that also emitted the sounds of energy production, and seeing what happened. The sounds were fascinating, the lights, less so, or less reliable. The event depended on a group of people willing to share and improvise, with no instructions, and to do so both as an art event, and as an experience that might connect with climate themes. It was an experiment, too, in how humans approach arts events, and for those who stayed with it, how humans approach each other in a strange situation, how they find alliances and make efforts at making meaning, when the authorial direction is intentionally missing.

Many of the difficulties that beset theatre and climate change were evident especially in Light Field, and throughout many pieces: how much information or instruction to provide when the public’s understanding is variable and constantly changing; does there even need to be any direct reference to the climate for a piece to effectively explore human responses to the situation; how can the subjects of climate change and sustainability change the relations between the work, the performers and the audience. 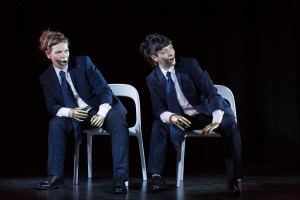 I live in Cumbria, and the floods in early December meant that I could not see Cock and Bull, Nic Green’s performance, with Laura Bradshaw and Rosana Cade. The following week, when waters subsided, roads opened and trains resumed, in Glasgow, Nic described the work to me in an unembellished account of what happened. She talked me through the first part of the piece, an exposure of corporate and governmental powers, of the weight of injustices of gender, class, ethnicities, shown through machinic movements and repeated choruses of party political texts, ‘hard working people/ pistons firing / we’re on your side…’. Then the energy and qualities of movements shifted, from something like an exorcism of aggression to a reprise, expressed in the softness of movements and an openness with the audience. The words changed to more of a dedication to the power between people, to ‘good luck, everybody’. 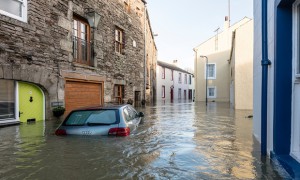 Flooding in Cumbria in December.

Those words struck hard, after days of the wrong rain, its intensity, direction and duration ripped out of any familiar pattern; of rivers without bounds, bridges breached, and winds slamming from the wrong direction. To wish someone ‘good luck’ in the face of uncontrollable situations, whether that of a malevolent politics or of a river that cares nothing for the lives in its path was not light-hearted irony. It felt more like an honest generosity, all that could be said to someone else in the circumstances, whether or not ‘luck’ exists. The words came closest to understanding something of the feel of being in the midst of a storm, expressing not a sentiment or intellectualisation, but an existential reality.

Had I seen the production, I may not have had this response. But having felt so immediately the effects of climate instability against my body, on my face and in the faces of my neighbours, imagining those words spoken to an audience, not as lines, but as an act of empathy, felt raw and right.

The UNFIX productions followed, and with the exception of Strang’s, were symbolic enactments of a future or indicative of apocalyptic disorder. While appreciating their intent and skill, those loud versions of an ending time belonged too much to a safe ‘theatrical’ stage and held no association for me beyond the room in which they were played. Their darkness felt contrived, familiar, not like the uncharted darkness for which luck may be necessary.

My impatience continues for theatre experiences that can do what that conversation did: prepare one for a moment through which some feeling rises that is unexpected, something is struck, something happens that is both rational and visceral and after which, something has changed. These are extreme expectations for theatre, and, of course, theatre has many layers of value. It may be that the everyday practices of making a communal kind of theatre, of workshops and walks are those that offer as rich a territory for what will be needed with increasing climate instability as that of theatrical productions with explicit themes. And I want to defend the apocalyptic, the utopian, the naturalistic, absurd and ironic, even the agit-prop, whatever theatre experience, as long as it, and the climate, do not become normalised and tamed.

But if theatre and performance want to move an audience, they will have to do more than provide information, or educate, or speculate about a life based on scientific models, or mine the fearing, warning and mourning rehearsals of an experience that has existed more in the abstract or as a prediction. My impatience is for more productions that feel like the experiment-in-progress that is life in a time a climate instability; that understand, in this human-to-human art form, that the human, itself, is changing.

ArtCOP Scotland offered many practitioners a short time to think about the climate. What would happen, if they were supported to think about it for longer, supported with access to the many strands of knowledge about the climate? What would happen if it was more than the central subject around which theatrical ideas were asked to form, embedding itself into other ideas and practices, allowed to worm away to make something that was not directly about the climate, but was inseparable from it? What if the very kinds of theatre that were being made started to change? My impatience, too, is for more diverse and imaginative methods for supporting practitioners, and for expanding the range of knowledge available for and from them. ArtCOP Scotland happened mostly where people were already working, which gave it a novel effectiveness; it is time now to think longer term if and how organisations can extend and intensify that more aesthetic rather than carbon-calculating support.

In the month of COP21, the situation changed. As storming waters brought the topsoil and river beds onto the streets, the climatic changes became material and rending of everyday life. Theatre will, and must, inhabit this new territory of immediate human experience, as it is undergone here, on this island, not simply to re-tell the stories of floods, but to pursue what those floods mean. The decision from Paris will not be enough. Fashioning a new sense of what humanity can accomplish, even if a vision of this is barely focused, is a task for theatre and its entertainments, in all its forms and locations.

esearches and teaches in the median zone where culture, art and human performance meet nature, the other-than-human and ecological thought. In these conjunctions, new forms of human experience can emerge, new modes of understanding and action take shape.

Wallace’s work is to analyse the experience of these art works and social practices, to consider how these events shape their social and ecological contexts, and to develop critical frameworks appropriate to the experience of culture in the time of climate instability.