Home / News / Artists / ‘Good Luck, Everybody’ – the theatres of ArtCOP: Part I

‘Good Luck, Everybody’ – the theatres of ArtCOP: Part I 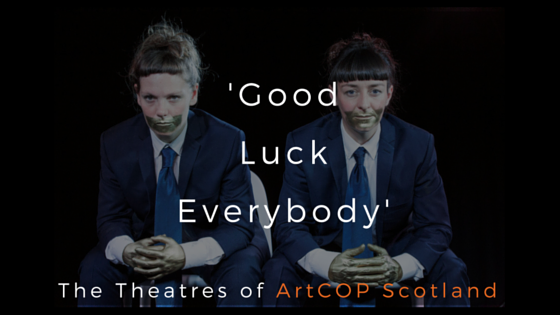 In this ArtCOP Scotland series, we asked Wallace Heim to write a contextualising essay of how a changing climate was expressed during two weeks of performances, workshops and exhibitions and what this might mean.

During COP21, Paris was a city undergoing the theatre that surrounds a critical decision, the political players negotiating values, profits and survival. Theatre filled the streets, too, replacing the cobblestones of other uprisings with the red lines of inflatables, banners and bodies. Activists breached the Louvre. Glacial ice melted on the Place du Panthéon (Ice Watch). Cape Farewell and COAL brought together scores of arts projects for ArtCOP. Many more, uncategorised artworks spread throughout the city, all articulating more than could be spoken in the meeting rooms and drafted in the papers of COP, fashioning other languages in different scales. 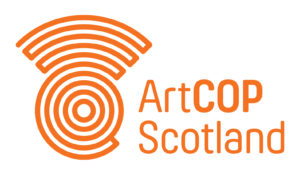 How could one stay at home and be together with all that? Creative Carbon Scotland devised ArtCOP Scotland, a festival of events, exhibitions, workshops and performances in Scotland simultaneous with the Paris meeting. ArtCOP Scotland was also a different way of doing a festival. It included performances by artists whose work already had an ecological dimension. But more than this, Creative Carbon Scotland took ideas of climate change and sustainability out to groups, artists and organisers already working with theatre and performance, but who had not yet incorporated ideas about the climate into their practices and productions. ArtCOP Scotland worked from where people were already enjoying the making of theatre, in meeting rooms, pubs, arts centres, schools, clubs. It asked practitioners to consider climate change as an idea they could play with, turn over, adapt. It showed that climate change is not merely a subject for certain strands of performance work, but is a subject that can imbue any work, in any place, for any audience.

Creative Carbon Scotland asked me to write a contextualising essay, offering not critiques, but a view of how a changing climate was expressed and what this might mean. The works varied in subject, audience, genre, intention; my responses loosely gather the works according to their form.

But the context itself changed in early December with Storm Desmond and my experience of it living in Cumbria. My responses to climate and theatre cleave around that and around a conversation that I recount below with Nic Green, whose performance I could not attend because of the floods. This doesn’t change how I thought about the preceding works, and their importance, but does change what I now expect, or need, from theatre. And my impatience with it.

‘THERE’S A POLAR BEAR IN THE BATHTUB’

Two events saw climate issues drawn into evenings of open rehearsals and readings that offer theatre-in-the-making for public enjoyment. ‘Stage to Page’ provides the chance for writers, directors, actors and audience members regularly to get together, take a scene from a newly-written play, hand it over to a director, choose the actors on the night, send them off to rehearse for an hour, and then play the scene to an appreciative and critical audience. For ArtCOP Scotland, Ben Twist, director of Creative Carbon Scotland, chose three climate change related plays from an open submission to get the ‘stage to page’ treatment: the consequences of a one-night stand of unprotected sex are set in a future world of rationed water and rigid economic hierarchies; a distressed polar bear is found on the street and brought home causing domestic trouble; a strange man in the woods hands a time-advancing watch to a young man who thinks it will help him in romance. 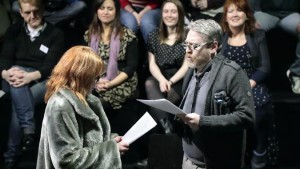 The plays kept to the convention that theatre is about human personal relationships, if absurdist, comedic and sci-fi influenced. The future has been a strong element in climate theatre, mostly to show and warn against dystopian prospects. But these plays leap-frogged over the transitions of the next decades to new world orders where the habits and expectations of human desires remain familiar, but are limited and frustrated by the controls of those necessary new orders; a post-climate-changed life. The public discussion that followed drew on both theatre ideas and climate apprehensions, and seemed as though at the beginning of putting those two together.

The second of these evenings, ‘It’s Getting Hot in Here’, was performed readings of short scenes from nine climate-related plays, held in a crowded pub back room. A couple choose a coffin for snow; a woman learns to listen, not talk, to dolphins; a couple with a house on a sea cliff come to know that ‘the sea takes back her own’; two Scots women talk about fossils while waiting for a bus; an average guy (American) talks over the facts of global warming. In a futuristic scenario, people walk ‘to the end of the line’, only to receive confusing hospitality. Activism is included in the one-hander of a woman from an oil-rich island in jail for protesting against oil extraction and contemplating suicide; and a Lebanese student comes back to his country warning of climate instability, but is not believed. An historical route is taken as a Victorian woman pub-keeper becomes a whistle-blower over pollution, and is betrayed by supposed allies co-opted by the controlling company.

Both evenings were good nights out, offering the enjoyment of theatre-making as a public process, as a local show among friends, with climate ideas seeping into the mix. Both evenings were firmly tied to naturalistic theatre. Some of the imagery and the settings, though, particularly in the ‘Hot in Here’ plays, felt fresh, as if a deeper layer of understanding was being exposed than that of relaying information, giving a warning, or proscribing behavioural changes that were such strong elements in early climate change works.

Artist-activists have redefined disobedience and resistance over the past 40 years, and in doing so, challenged ideas of art and of the political. The contributors who offered more directly politicised actions to ArtCOP Scotland used the route of a workshop leading to a performance to bring out the immediacy of Scottish issues. The three shared in their movement from complex ideas to a mode of communication that was, or strived to be, authentic and a window through which to view a situation. 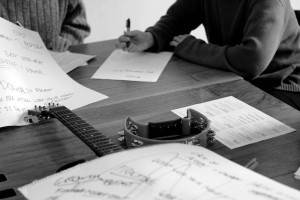 Looking for the clarity of a protest song that could teach, mobilise and remember was the task of Tom Butler’s workshop, ‘Anthem’. In a few hours, with a group of strangers, myself among them, under his guidance, we talked over our thoughts on climate change, the economy, politics, honing the divergent responses and obsessions into a few stanzas and a chorus that we could sing, and did, on the balcony at the Centre for Contemporary Art, Glasgow. The historical legacy of song as communicator and container for social movements felt both archaic, given social media, but also a familiar ground. What emerged, on that day, with that group of people, was the unresolved conflicts within which one lives, that one can protest ‘not in my name’ against injustices, but the economic forces of neo-liberalism mean that the institutions and corporations using one’s money can act unimpeded against one’s intentions. (Watch their performance here).

The Firefly Arts’ GASBAGS’ piece, Much Reduced and Getting Smaller, performed by Laura Firth and Daniel Brown, came closest to an agit-prop event, a rap on consumerism, food waste and carbon footprints told through dialogue and physical theatre with a contagious, at times frenetic, energy. In another project by young persons, students at Govan High School worked with Ailie Rutherford and the short story Report on the Threatened City by Doris Lessing, in which an alien views earth society. They produced a looped stills montage of images of Govan, energy use, pollution and of their statements and imploring challenges, some read aloud at the CCA. ‘You think talking about a problem will solve it’, the alien says. 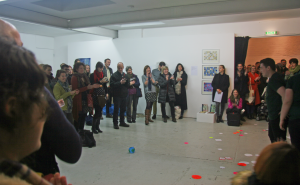 Laura Firth and Daniel Brown, Firefly Arts, performing “Much Reduced and Getting Smaller” at the ArtCOP Scotland Launch.

It was significant to have both these workshops included as a full part of this mix of events. The arts have been used to ‘teach’ climate change in the education system for many years. Having the acute observations and expressions of emotions as one among the many efforts at grappling with theatre and climate change was a reminder of how close the development of ideas by young persons is to that of the adult practitioners, and how meaningful it can be in their lives.

Images courtesy of: Thomas Butler and Stage to Page. 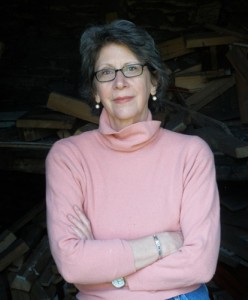 esearches and teaches in the median zone where culture, art and human performance meet nature, the other-than-human and ecological thought. In these conjunctions, new forms of human experience can emerge, new modes of understanding and action take shape.

Wallace’s work is to analyse the experience of these art works and social practices, to consider how these events shape their social and ecological contexts, and to develop critical frameworks appropriate to the experience of culture in the time of climate instability.