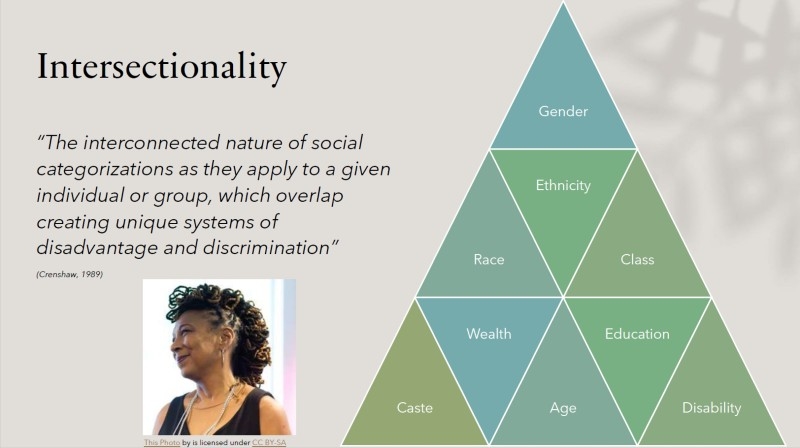 On 25th March we held a Green Arts online meetup on the topic 'Intersectional Justice in Climate Action'.

Thanks to the wonders of Zoom, we were able to enjoy a presentation from Ana T. Amorim-Maia, PhD Researcher at the Barcelona Lab for Urban Environmental Justice & Sustainability at Universitat Autònoma de Barcelona (UAB). Ana’s research focuses on climate change adaptation, climate justice, intersectionality, resilience and urban planning. Last year Ana presented about Intersectional Justice in Climate Adaptation at a workshop for Clyde Rebuilt. Amanda felt that this way of joining the dots between issues of equality, diversity and inclusion (EDI) on the one hand, and climate action on the other, would be very useful for Green Arts members, particularly when working on EDI and environmental policies and planning.

Before Ana’s presentation, we read a provocation from an academic article*:

“Many artists and arts and culture initiatives working for a sustainable planet think that the ecological crisis is intertwined with other social and political problems, and when they take action for sustainability, they do so with the intent to create solutions for these problems as well. They think that living in a sustainable world is possible only if the issues of democratic deficit and inequality are resolved. Therefore, working on the climate crisis simultaneously denotes working on problems [of inequality].”

We took a poll on how we felt about this statement. 66% of us said we ‘strongly agreed’, while 33% ‘somewhat agreed’.

There is an uneven distribution of the benefits and burdens of climate impact and climate action. Climate action often takes the form of mitigation or adaptation, both of which can impact upon social inequality.

Climate action and social justice need to be considered alongside each other. For example, low-income, working class, and immigrant communities are faced with intersectional experiences of climate vulnerability and greater marginalisations, exclusions and injustices.

There is a danger of climate gentrification, when properties and areas previously seen as undesirable are adapted to face climate impacts, thereby pushing up value and prices. This further alienates and displaces vulnerable residents and creates ‘elite ghettos’ for the privileged. 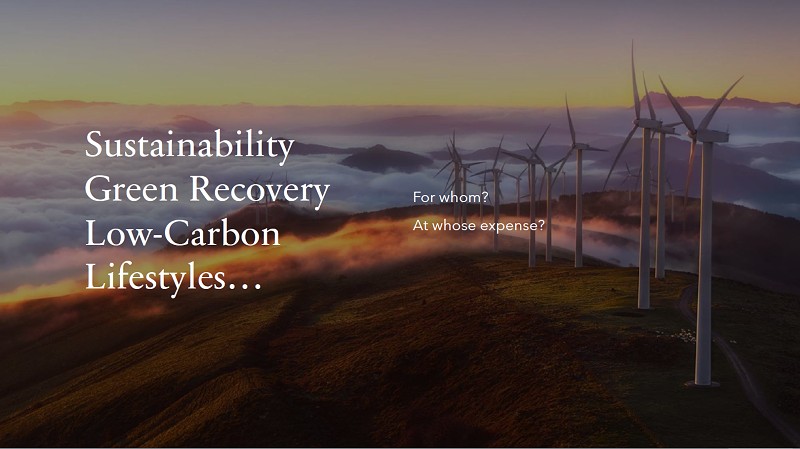 ‘Intersectionality’ was coined by Professor Kimbleré Crenshaw in 1989 to describe how race, class, gender, and other individual characteristics ‘intersect’ with one another and overlap. Working with the concepts of intersectionality allows us a more diverse view of different lived experiences.

Intersectional justice in climate action helps move away from greening or low-carbon improvements that perpetuate or exacerbate vulnerabilities and encourages a multi-actor, multi-sector and multi-scale effort for climate justice.

Thank you to Kate Leiper for taking these notes on Ana’s presentation.

We returned to the quote we read earlier, and took another poll. This time, 100% of us said that we ‘strongly agreed’ with the statement that “working on the climate crisis simultaneously denotes working on problems [of inequality].” Ana’s talk was clearly very effective!

Participants moved into breakout rooms and considered the following questions:

Q1. How might some of your (organisation’s) carbon reduction measures or plans impact on people with differing abilities, gender or sexual orientation, employment status, different racial and socioeconomic backgrounds, or other characteristics in this triangle?

With the follow-up questions: 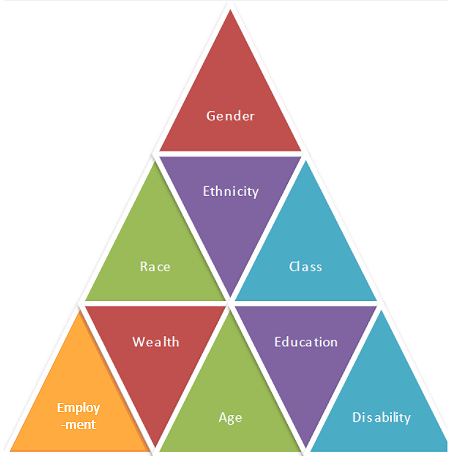 The situations imagined and discussed by the groups included:

If your organisation plans to reduce its carbon footprint by: choosing countries to work with which are close enough that collaborators can take the train rather than fly (which is much more carbon intensive)…

This would negatively impact on certain groups more than others because of : exclusion by geographical location. This might be particularly problematic if UK cultural organisations stop working much with organisations and artists in the Global South, as the UK needs to learn about their different experiences in order to respond to climate change in a just way. The impacts could be unequally felt because not everyone has adequate WiFi and digital infrastructure to participate in remote collaborations.

How could we mitigate this impact or offer alternatives? Organisations could set annual travel carbon budgets, and ringfence a portion of each year’s budget for working with collaborators in countries only accessible by air. When there is a festival or conference which requires a flight to attend, fewer people from Scotland could attend, but with a remit to share their learnings with other Scottish cultural organisations when they return, maybe at an event (to which people can travel overland!). This could prompt useful discussions and collaborative ways of building on the ideas generated at the international festival or conference.

You can see several further examples and ideas in this record of the breakout room discussion.

An overarching insight was that rather than try to offer a one size fits all solution for everyone who might be impacted by carbon reduction actions, we should open up conversations, talk with those who are affected, and work out appropriate ways to adapt our plans and policies, so that reducing carbon is an inclusive, collaborative effort.

Groups were then invited to consider a wider question:

Q2. How can the idea of intersectional climate justice be applied to cultural organisations’ wider work – environmental and beyond?

Some concrete examples were highlighted:

Further ideas are included in the write-up of the breakout room exercises.

Some quick actions to take were suggested, including:

*The academic article from which the provocation was taken was a draft of ‘Transformation for a Sustainable Earth’ by Fazilet Mıstıkoğlu and colleagues at Istanbul Foundation for Culture and Arts. As an arts organisation that receives public funding, we have an obligation to... Session One In the first session, we offered an introduction to climate...