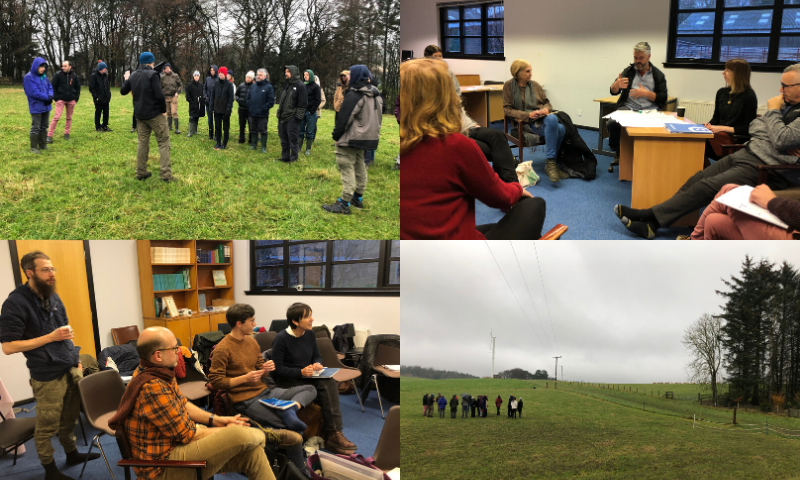 Images of group discussions and tour of Glensaugh Farm

On Monday 25th November 2019, delegates converged on the James Hutton Institute’s Glensaugh research farm in a remote part of Aberdeenshire to discuss the future of food.

The event was organised in collaboration with the James Hutton Institute and brought together a diverse array of their researchers with farmers, representatives from environmental and arts organisations, and independent creative practitioners. Our aim was to discuss the ways that research at the Hutton Institute ought to engage with the issue of how to reduce the environmental harm of farming and food systems and the ways that they could work with arts and culture to present their research in new ways in order to increase their reach and impact. It was also a chance for those from an arts background to benefit from their up to date research.

The day started with a few short presentations that set the scene for what challenges Scotland currently faces regarding food. The issues raised included erosion of and depletion in the quality of soil (leading to the controversial ’60 harvests left’ prediction), the destructive potential to wildlife of some of the chemicals used in farming, the damage that oversimplified large scale farming can result in by replacing biodiverse countryside with monocultures, unnecessary surpluses, and the transport emissions of importing and exporting food.

There was also discussion of the threats that climate change poses to food production worldwide, with ‘breadbasket’ being those who climate is also forecast to change the most radically, and 1 in a 100 year shocks to food production set to increase to  1 in 30 by 2040. Another issue raised was that sellers were also responsible for creating sustainable food systems. 70% of UK food is sold in supermarkets and around 100 buyers dominant the food market in the UK, meaning that finding solutions is likely to involve working with them. WWF are working with Tesco on the sustainability of their food, for example.

This was followed by presentations and debate around what the solutions to these problems are. These ranged from practical solutions that are already in use such as planting fields with mixtures of crops, avoiding leaving soil exposed by planting a covering crop over winter, avoiding driving heavy machinery over soil, and increased tree planting on farms, to research into ‘precision agriculture’ and ‘vertical farming’ that could take place in cities and independently of soil quality. One recurring theme was that of ‘regenerative agriculture’: farming that helped protect and restore soil and wildlife rather than damaging it.

During the locally-sourced lunch artist Frances Davies handed out ‘menu cards’ that presented delegates with a 25-year-old art work that engaged with farming – Agnes Denes’ Wheatfield: A Confrontation, which involved her planting, maintaining, and harvesting a field of wheat on a landfill site two blocks from Wall Street – with prompts for conversation. This intervention aimed to encourage attendees to think more broadly about their aims, how they frame their research, and creative ways of engaging people on the issues, paving the way for the more open-ended discussions later in the day. 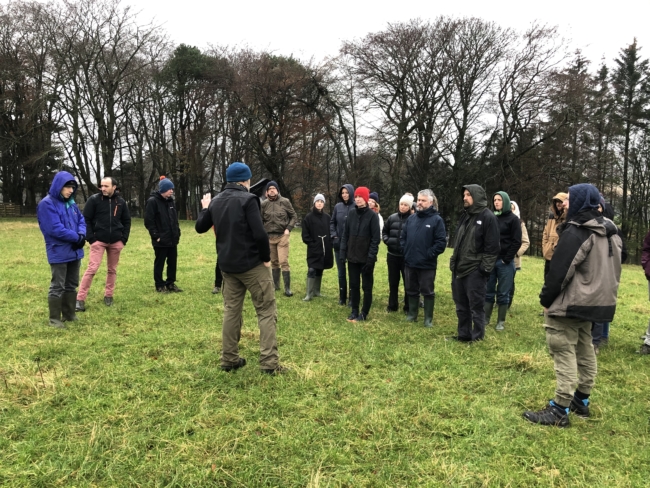 Lunch was followed by a tour of part of the farm, which included discussion of the limited options available to farmers working on lower quality land – like 80% of Scottish farmland Glensaugh is designated ‘less favoured’ meaning that it is an ineffective context for growing most crops – and combining farming and forestry on the same land to encourage tree planting.

After the tour we heard from director and theatre-maker Lu Kemp, who discussed her play A Six Inch Layer of Topsoil and the Fact it Rains, which was based on interviews with Scottish farmers and taken on tour round village halls. The production aimed to catalyse discussions in farming communities about the future of farming and audiences were encouraged to stay and discuss their thoughts on performances after they finished. Lu also gave her thoughts on the value of the arts as a way of ‘telling stories’ and contributing to wider shifts of opinion, giving examples such as the Manhattan Theatre Club.

The final discussions of the day focused on making plans for the future including new research projects and new ways of promoting research. Suggestions included inviting artists to attend the next Hutton Institute research symposium and encouraging them to produce work in response and organising a ‘Hutton Institute Fringe’, collaborating with arts and culture to educate and engage members of the public.

Annabel Pinker, a researcher at the James Hutton Institute and co-organiser of this event , said:

I was glad to see that there was a lot of interest and curiosity in the room about being in dialogue with artists in different ways – I think that people saw and felt the value in it. The atmosphere seemed unusually open and exploratory to me – which I think was heavily down to the presence of artists in the room. It de-stabilised the business-as-usual sorts of discussions we so often have.

The idioms used by artists and scientists are different and in any interdisciplinary setting lots of time is needed to listen and feel into the assumptions/values/logics at work in someone else’s way of seeing. So one clear take-away for me was that we need significantly more and ongoing conversations between researchers and artists around how we might work together and what collaboration might look like.

Food for thought! A rare opportunity to listen to experts in a variety of fields, and to have that inform our thinking around story and public conversations. I would love to create more space for playwrights and scientists to connect, allowing their respective crafts and research to inform one another.

This resource is part of our culture/SHIFT reading series which showcases...

Between October 2012 and April 2013, artists Baxter and Gittins undertook a...