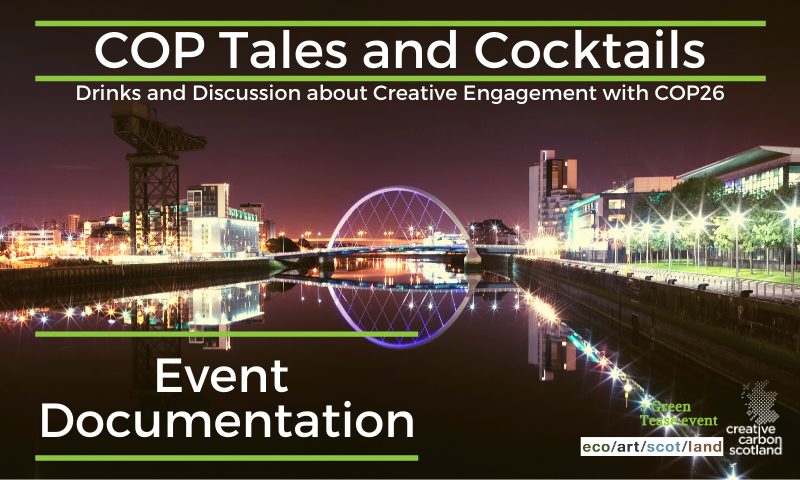 On a wet and wild evening on the 10th of December 2019, almost a hundred people gathered together to share their plans for COP26, discuss their goals, and make new connections and plans, accompanied by cocktails and snacks. This page records the speakers and discussion and provides links for further resources and information.

COP26 will be the 26th annual UN climate conference, probably the most important gathering on climate change since the Paris Agreement (2015). For COP26 decision makers from governments around the world will converge on Glasgow to measure progress and set targets for the future. In addition COPs have become a flashpoint for environmental protests and civic engagement – as well as fossil fuel lobbying. This event provided an opportunity to hear speakers present their plans for the COP and space for free-form discussion and opportunities to record ideas on whiteboards positioned around the room.

A Facebook group has since been created to continue discussions instigated at this event.

Recordings of all the speakers are available as a podcast.

Ben Twist from Creative Carbon Scotland kicked off the evening with some reflections on his experiences of creative engagement with COPs in the past. He emphasised some of the challenges that need to be overcome, such as:

Ben stressed that arts and culture do have a lot to offer as a means of engaging international and local communities or decision makers and can take advantage of the spike in awareness that will come with the presence of the COP to spread their reach more widely, especially during the run-up to the COP. He recommended subscribing to the Earth Negotiations Bulletin as a means of keeping up to speed with developments and looking at Season for Change as a planned major programme of artistic engagement with COP26. He also recommended attending the Creative Carbon Scotland Cultural Adaptations conference taking place in Glasgow just before COP26.

Chris Fremantle from ecoartscotland followed this with a different approach, involving attendees in a performance of an extract from eco-artists Helen and Newton Harrison’s Lagoon Cycle. He also quoted Helen Harrison in saying

‘Our work begins when we perceive an anomaly in the environment that is the result of opposing beliefs or contradictory metaphors. Moments when reality no longer appears seamless and the cost of belief has become outrageous offer the opportunity to create new spaces – first in the mind and thereafter in everyday life.’

and discussed their idea of the ‘Urgency of the Moment’, emphasising that decisions made within this ten-year period will have repercussions over a far longer time-span. 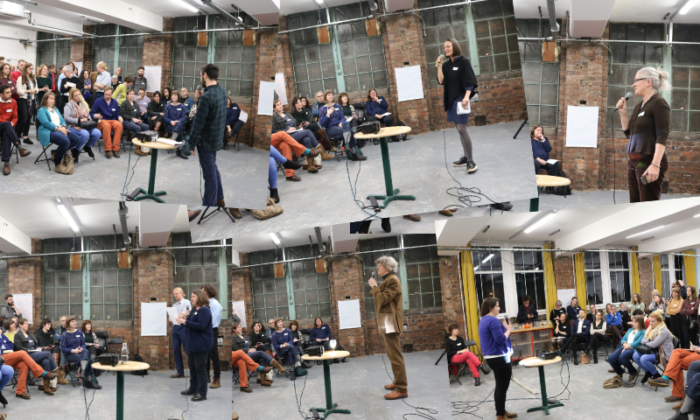 We then heard elevator pitches from:

You can listen to a recording of these talks as a podcast.

Artist, Julia Barton also sent us a video about her plans for the COP with a call for collaborators, which can be viewed below:

Notes made during the discussion

Some of the most important themes to come out of the discussion were:

Below is a transcript of the images for easier reading. Pluses (+) indicate where others have shown their agreement with an idea using ticks or stars.

When are you planning for?

Who do you want to work with?

What are the most important issues to work on?

Who do you want to influence?

What are your goals? COP21 – The most important meeting this...