Green Tease Reflections: All about COP26 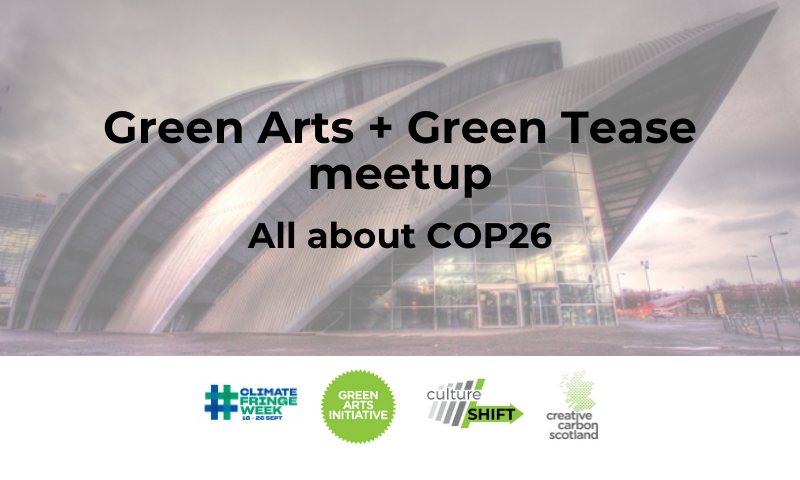 Image of the Armadillo building in Glasgow, which will be the site for the COP26 climate talks.

23rd September 2021. This online meetup brought together people from the Green Tease network and Green Arts Initiative to discuss COP26: What’s going on? In the negotiations, in the cultural sector and on the streets.

COP26 is the 26th annual ‘Conference of the Parties’ to the UN Framework Convention on Climate Change. It will be held in Glasgow, at the SEC, in November 2021. For those interested in the roles that arts and culture can have in developing climate action, this represents a major opportunity to step up our efforts. This event featured a range of speakers as well as time in breakout rooms to focus in on more specific themes. This event was held as part of Climate Fringe week.

A video of our speakers is available here and below you can find a summary of what they discussed.

All About COP26 Meetup.mp4 from Creative Carbon Scotland on Vimeo.

Kat Jones, COP26 Lead at Stop Climate Chaos Scotland, discussed the focus of this COP summit, and what they hope will (or will not) be included in any ‘Glasgow Agreement’. The big issues include raising the funds for climate policies, paying for loss and damage caused by climate change, and stepping up the ambition of the emissions cuts that countries are pledging.

She discussed the structure of the negotiations themselves and the issues with access and participation that these throw up and outlined their focus on finding ways for people to get involved outside of the formal space. She encouraged everyone to make use of the Climate Fringe website, which lists COP26-related events both within and outwith the formal space and highlighted some ways that attendees could help support plans around COP26:

Get in touch at arts@stopclimatechaos.scot for more information.

Meray Diner discussed the 1.5 Degrees Films Climate Challenge being run by Film Access Scotland. The project invites people to make 90-second films to share their thoughts and ideas about climate change and how it is affecting us as individuals, our surroundings, families and communities. For groups based in Scotland they are offering free online workshops in filmmaking as part of the process. They are planning on showing some of the films at events during COP26 as well as future screenings around Scotland in the following months.

Get in touch at 1.5degrees@filmaccess.scot for more information

Elizabeth Freestone discussed her book 100 Plays to Save the World, which is being published ahead of COP26. The book aims to provide a resource for theatremakers who are looking to explore climate issues through their work. It highlights a mixture of explicitly climate-focused plays alongside with older players that can be used as a way to engage with climate change if contextualised in the right way. Her message was to stop searching for the one great climate change play and to work with the fantastic things that are already available.

Graham Hogg  discussed the After the Pandemic project, which was organising an alternative community-led space in Glasgow during COP26. Unfortunately this space has not been able to go ahead but his contribution still usefully emphasised the importance of actively involving local residents in planning around COP26 and creating spaces to allow people to participate in the moment, given that the negotiations themselves are not open to everyone. Their work also continues in many other ways.

Fadzai Mwakutuya discussed her artivist project Climate Change Creative, which is bringing the work of creatives abroad to demonstrations around COP26, and the group Culture for Climate. She discussed the importance of using COP26 as an opportunity to develop international solidarity and showcased Climate Change Creative as one example of this through allowing international artists’ work to be brought to COP26 when they cannot make it in person themselves. The Culture for Climate group has also been developing recommendations for how the cultural sector can engage with climate justice, which are available on the Creative Carbon Scotland website.

Each breakout room focused on a different theme suggested by attendees. These themes were:

Notes from the breakout room discussions can be found in this shared document.

Image credit: “Armadillo” by Alan Weir is licensed under CC BY 2.0

About the Green Arts Initiative 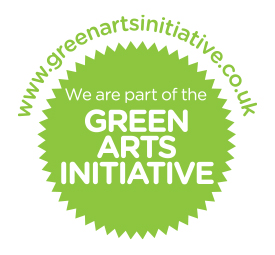