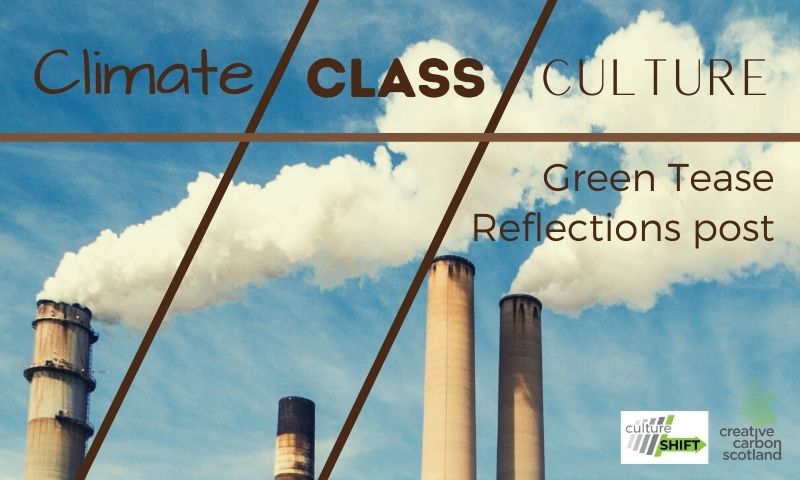 14th October 2021: This Green Tease event provided an opportunity to explore the intersection of climate, class and culture, thinking about how climate change is exacerbating existing inequalities, the need for climate policies to be socially just, and the importance of cultural organisations addressing their own barriers to participation in order to effectively help address climate change.

Our two speakers for this event were Francis Stuart, Policy Officer at the Scottish Trades Union Congress and Katharine Wheeler, artist and representative from The Stove Network, the first artist-led development trust in Scotland. You can watch a video of their two talks here or read a summary in the text below.

Francis Stuart discussed how the climate crisis intersects with issues of poverty and inequality, highlighting some key examples playing out in Scotland right now. He showed how the wealthiest countries are responsible for most of the world’s emissions but are less heavily impacted by the impacts of climate change. This inequality also plays out in the UK where the emissions of someone in the richest 1% is eleven times that of someone in the poorest half of the population.

In Scotland, transport is the sector responsible for the largest portion of emissions with the majority coming from road transport. 29% of households do not have access to a car while, over recent decades, bus tickets have increased in cost while usage has fallen. This affects quality of life but also limits the availability of lower carbon transport options.

Housing is also a major source of emissions with many of Scotland’s homes being poorly insulated, meaning that energy used to heat homes is wasted while a large portion of the population live in ‘fuel poverty’, speeding more than 10% of their income on heating. Francis highlighted the need for retrofitting of buildings to jointly address both these issues.

Renewable energy generation in Scotland has trebled in the last three years. However there has not been a corresponding increase in jobs in the sector. The offshore wind sector is largely owned by private companies most of which are registered outside of the UK and are able to pay employees significantly less than the UK minimum wage with manufacturing jobs often located in other parts of the world. Francis argued that if renewable developments do not offer high quality jobs they will lose their public support making further development more difficult.

Francis finished by highlighting some key lessons on how environmental and anti-poverty campaigns can work together, giving some examples of past campaigns such as the Lukas Plan, the Green Bans movement, and the Pollock Free State. He argued that the role of culture can be to help form connections, allowing people to work together more effectively and form collectives to more effectively bring about change.

Katharine Wheeler also highlighted the role of collectivism and how the Stove Network uses the arts to connect to social issues and help members of the community to actively shape a future for Dumfries. The town has an ageing population, lower than average employment levels and the town centre is in the top 10% of Scotland’s Index of Multiple Deprivation.

The Stove Network runs events and activities from their building in the town centre working with people who are often not a traditional arts audience. They offer a place for discussion, exploration, and for local groups to come together, using art as a way to develop conversations. For example, a previous event involved bringing together diverse stakeholders to develop a ‘People’s Transport Policy’ for Dumfries.

They also hold events away from their site, such as at the Nithraid River Festival where they tried to develop debates over defences against the flooding of the river. Another event called We Live with Water invited people to imagine what a Dumfries 50 years in the future that had embraced its relationship with the river would look like.

The Stove network aims to bring about real change by allowing local voices to influence policymaking, developing skills and growing culture outside of the main centres. Further information about their approach to ‘Creative Placemaking’ is available in a recent report.

This was followed by some discussion time where we split into smaller groups to reflect on the issues raised by our speakers and respond to some prompts – including an interview with artist John Akomfrah, a photograph of an art installation at Taigh Chearsabagh arts centre and museum, and some old political posters from the 1970s – which are available to view here. Here are some of the key ideas that came out of the discussion:

The Green Tease events series and network is a project organised by Creative Carbon Scotland, bringing together people from arts and environmental backgrounds to discuss, share expertise, and collaborate.