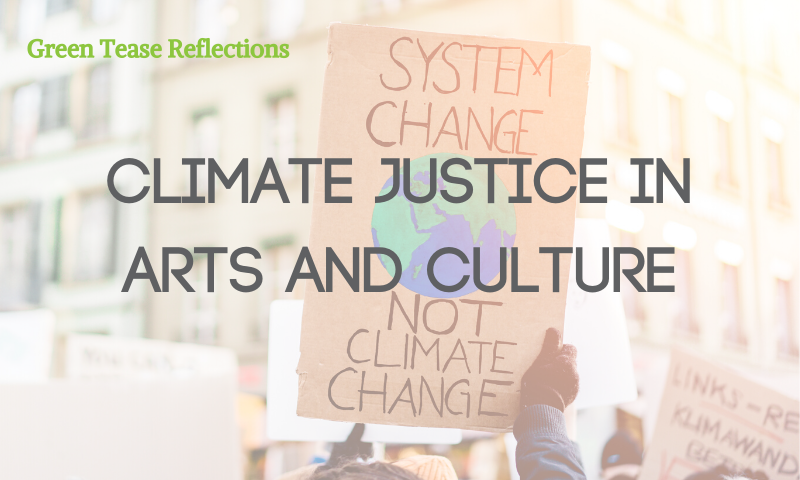 25th February and 5th May 2020: We gathered together representatives from Scottish arts organisations for two discussion sessions on Climate Justice: what it is, why it matters, what the cultural sector can do to embody and promote it. The discussions are summarised below but work on this is still ongoing so do please get in touch if you have thoughts of your own.

Lewis kicked off the discussion by throwing out some examples of campaigns that appear to engage with issues of climate justice:

He also drew attention to the long history of climate justice and how long it has taken for us to engage with it. He showed images of the 2002 Bali Principles of Climate Justice adopted at the Earth Summit in Bali, which were in turn based on the 1991 Principles of Environmental Justice, drafted at the First National People of Culture Environmental Summit, Washington DC.

In pairs we then attempted to define the term climate justice and consider where we are most likely to encounter issues of climate justice living in Scotland and working in arts organisations.

Our definitions of Climate Justice shared an emphasis on disproportionate impacts of climate change falling on already disadvantaged people, exacerbating existing inequalities. We also raised the importance of taking responsibility for the large contributions the UK has made to global emissions and sharing the burdens (and potential opportunities) of climate change. It was widely agreed important to put the emphasis on the collective rather than the individual and to develop a reasonably objective framework.

Some other useful definitions and examples are also available on the GCU Centre for Climate Justice website.

Discussions of relevance to arts and culture organisations raised:

Following this, Helen Trew of Creative Scotland contributed by drawing some useful connections between climate justice and existing Equalities, Diversity and Inclusion policy. She pointed out that, like climate justice, EDI is not just relevant to arts organisations and thus forces us to consider our position as part of a wider purpose. She discussed how, like climate change, the protected characteristics involved in EDI apply to all of us, but not to the same extent: ‘Treating everyone the same does not result in equality’. Similarly, although climate change will affect all of us, it will affect everyone in different ways and to different extents, which climate justice recognises. She also suggested that climate justice and EDI share the issue that, while it’s easy to see the value from a broad perspective, it can be more difficult to see what you can or should do within your own immediate context, which takes detailed examination and thought.

What can we do?

In the final discussion section, we started trying to think about how we as arts organisations can:

Suggestions from the discussion included:

The second session focused on splitting into breakout groups to come up with suggestions for concrete actions that arts organisations can take to engage with, embody, or promote climate justice. We focused on the issues that were agreed to be most important in the first session and tried to make use of what we had learned from our own experiences. The full notes from this session are available online as a Google doc here.

The first set of breakout groups was based on some of the climate justice issues that we had agreed were most important to focus on. The suggestions from these discussions included:

The second set of breakout groups focused on the areas of activity in arts organisations where we felt climate justice considerations ought to be considered.

Getting staff and board buy-in

Providing a platform or removing barriers

Discussion and information gathering is ongoing, so please get in touch with lewis.coenen-rowe@creativecarbonscotland.com if you would like to contribute. In this guidance you will find information on: Why you should be talking... Since 1992 Highland One World Global Learning Centre have supported schools in...

Case Study: Start the Change with Highland One...