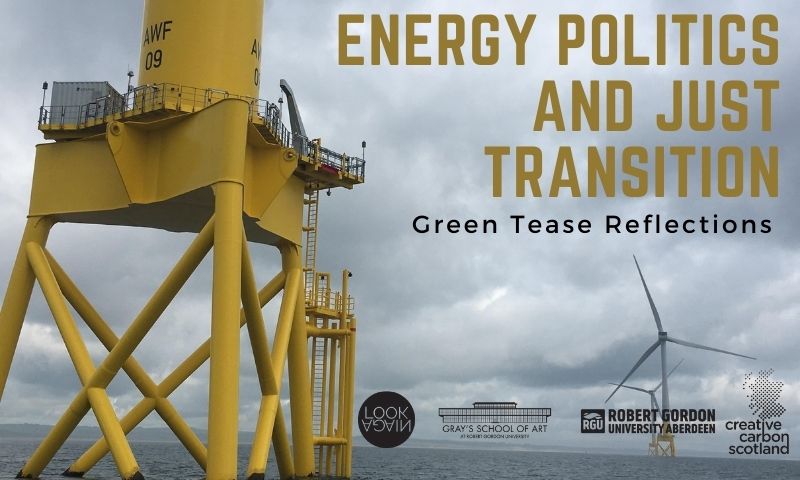 A photograph of wind turbines taken off the coast of Aberdeen from a boat. The image includes a close-up image of the wind turbines. Their colours are mainly grey with a bright yellow base. The sea is dark and calm. The sky is grey and overcast. Text reads: Energy Politics and Just Transition: Green Tease Reflections.

4th September 2021. This event brought together a former oil worker, activists, researchers, climate and social justice collectives and organisations to discuss their work and reflections on Energy Politics and Just Transition in Scotland. It was organised in collaboration with Fertile Ground.

Energy systems; coal, oil, renewables help shape our economic and political structures. The discovery of oil in the North Sea in the late 1960’s transformed the UK as a much-needed source of energy security and as the UK gateway to the industry, came to dominate Aberdeen’s economy. Energy transition for Aberdeen and the wider North East remains a complex and challenging concept, from the failure of current renewable energy investment to provide meaningful work, to the lack of engagement with wider communities affected by energy transition.

The event was programmed as part of CRUDE, an exhibition at Look Again Project Space exploring our complex relationship to crude oil through newly commissioned works from artists and writers; Ashanti Harris, Alison Scott, and Shane Strachan. Visitors to the event were able to arrive early or stay on afterwards to explore the exhibition.

A video of the speakers at this event is available to view here. You can also read a summary and reflection on some of the main issues raised in the paragraphs below.

Rachel Grant, curator at Fertile Ground, introduced the session by discussing the central role of the oil industry in Aberdeen’s history and the way that energy systems shape our culture as well as our economy. She commented on the visible traces of the oil industry everywhere in the city, from civic infrastructure through to BP sponsorship of Aberdeen Art Gallery. She also discussed the  transition away from fossil fuels and the importance of not replicating past injustices. As an example, she outlined the proposal for an ‘Energy Transition Zone’ developed by oil tycoon Ian Wood, which would involve building space for businesses and renewables infrastructure on St Fittick’s Park, a wetland site vital for bird migration. This would be the fourth industrial land clearance in the local community of Torry, following the model of previous infrastructure clearances for the oil industry.

Next, researcher Ewan Gibbs outlined the role of the North Sea oil industry in recent Scottish history. He discussed the rapid transition from coal mining, with employment from mines having fallen from 80,000 to 30,000 from the 1950s to 1970s, and the idea that oil extraction encouraged different types of employment, with people moving to working offshore with homes scattered across the mainland rather than gathered together in a single community. He also emphasised the role of the North Sea oil industry in debate over Scottish independence and arguments over whether the profits from the industry should belong to Scotland or be distributed across the UK. This was particularly pertinent given the relative poverty of North East Scotland, with many people experiencing fuel poverty while living adjacent to oil refineries. 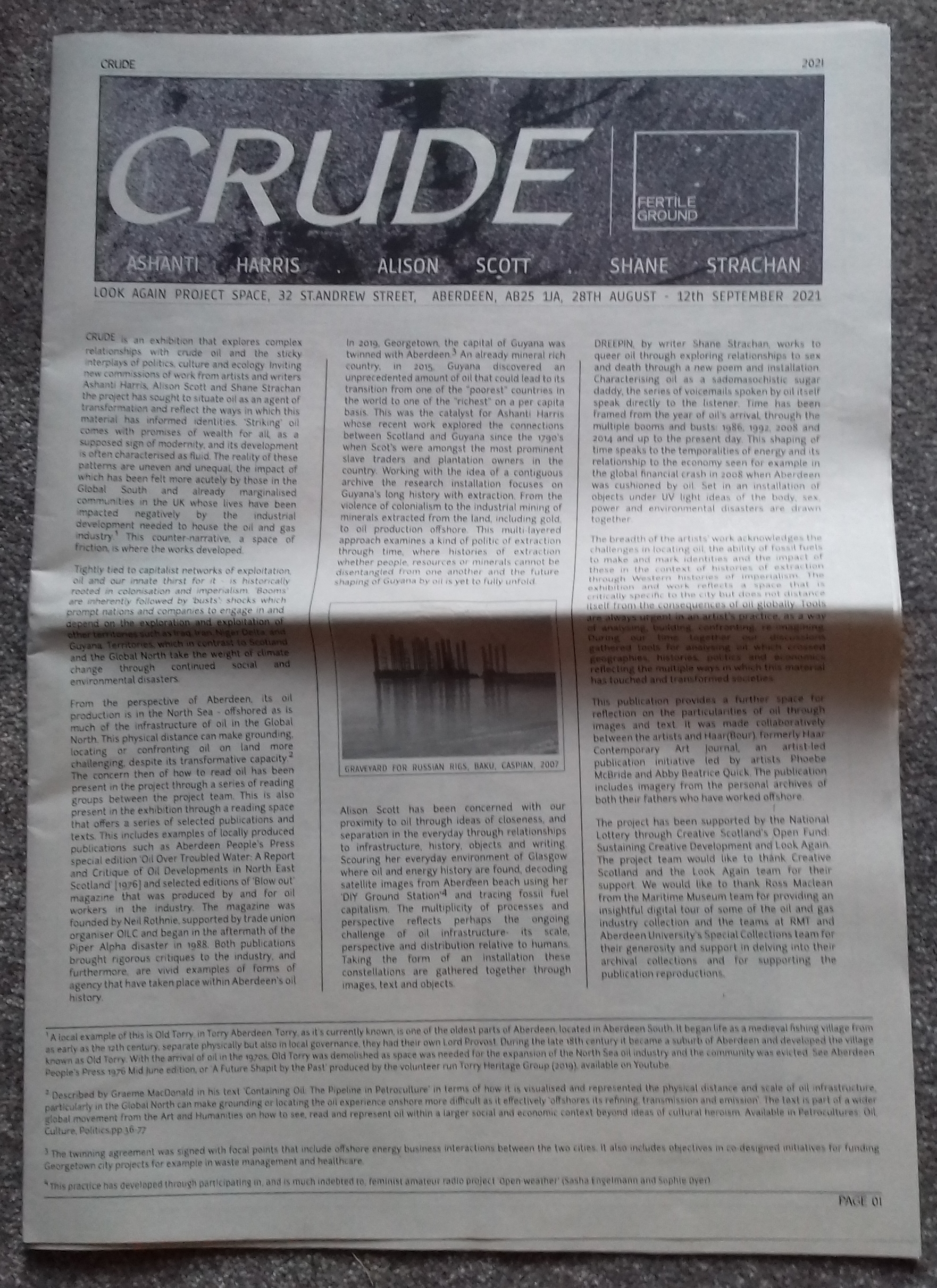 Ryan from Friends of the Earth Scotland and Gabby from Platform discussed their experiences of discussing the just transition with oil workers. For context, they spoke about the ways that workers rights and environmentalism have come together in the past through examples like the Green Bans movement in Australia and emphasised the importance of ‘people power’ as a way to hold ‘financial power’ in check. Although the need for a Just Transition has been formalised in the Paris Agreement and through the appointment of a Just Transition minister for Scotland, there remain a number of issues. The £62 million energy transition fund established during the covid-19 pandemic doesn’t require retention of workforce, job creation, or emissions reductions, and at the peak of the first lockdown the oil industry workforce had dropped from 26,900 to 14,000. Fire and re-hire practice, increased casualisation of contracts, and the risk of blacklisting if workers join unions continue to be issues in the industry.

Friends of the Earth Scotland, Platform and Greenpeace surveyed 1400 offshore workers, 5% of workforce at the time, and spoke to 400 more on the phone. They found that 82% would consider leaving industry, but that 91% had not heard the term Just Transition. Job security was the most common top priority, and a lack of training or funding for training were seen as main barriers to workforce transition. They are currently working on a film about the just transition and plan to hold screenings as conversation starters for further discussions with oil workers.

Finally, Neil Rothnie discussed his experiences as an oil worker and more recently as a climate justice campaigner. He highlighted how the quality of jobs in the North Seas oil industry had been in decline for a long period, with a decline in wages after inflation and major safety breaches such as the Piper Alpha incident and at Total’s Elgin Complex in 2012. He highlighted that the renewable industry won’t necessarily work to the benefit of workers unless regulation ensures it. Currently, international renewable energy companies working in Scotland have not brought many jobs to local residents. He called on artists to help ‘upset the applecart’ by thinking creatively and challenging the status quo through questioning the role of the oil industry in the just transition and critiquing fossil fuel sponsorship of the arts.

This was followed by some open discussion time to further explore the issues raised by the panellists. Here are a few extra points that emerged from this discussion: Understanding international and national policies can help strengthen and...