Read about our last Glasgow Green Tease where we conducted a series of experiments on the River Kelvin with artists Minty Donald and Nick Millar .

A few weeks ago our monthly Green Tease group gathered in the cosy surroundings of Tchai Ovna teahouse in Glasgow’s west end to talk about water. We were joined by artists Minty Donald and Nick Millar who led the group in a session around our current understandings of water and how we might develop new ‘tactics’ for engaging with this dynamic non-human force.

In 2013 Minty and Nick travelled to Calgary, Canada to undertake a residency with the city’s Water Services department. In the context of a flood that swept the city in June that year, costing £5 billion worth of damage and repairs, the artists were plunged into a complex context in which to respond to the city and its inhabitants’ changing relationship with the Bow River in Calgary. 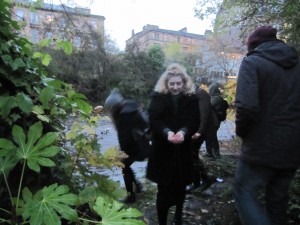 Bringing it back home, the artists invited Green Tease to undertaken a series of performative experiments on the nearby River Kelvin which they had devised in Canada named ‘guddling about’. This term, Minty explained, was chosen for its onomatopoetic qualities as well as its reference to a playful, childlike activity which they hoped to achieve through the series of actions.

As the light faded we stomped down to varying points along the riverside to undertake the experiments instructed to us on a series of white cards:

Each experiment asked us to perform a different action – carrying the water in our palms for as far as possible; transferring the water of one puddle to another (using a turkey baster); and throwing degradable materials into the river to watch them float away. These seemingly simple acts on paper became more complex when we were confronted with the wet weather, the rushing pace of the Kelvin after heavy rainfall and the lack of easy entry points to the river from the park. This contrast of written instruction versus the lived experience served to highlight what Minty and Nick call ‘vital materialism’ – unveiling the agency of non-human entities such as water, weather and the climate.

Back in the teahouse we heard more about the Calgary residency and some of the key issues it raised for the artists. One area which caught their attention was the politics around the representation of water and natural resources more generally in Canada. Nick highlighted the global perception of Canada as a country boasting an abundance of clean resources and energy sources. In his understanding, however, the cleanliness of the Bow River in Calgary, in which the city and its residents prided themselves, was partially sustained by energy income generated through Alberta’s tar sands industry. 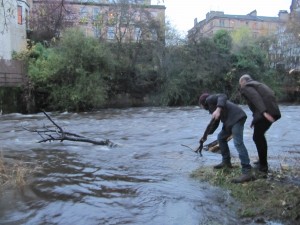 The evening’s discussion finished with the question of what role, if any, Minty and Nick saw themselves playing as artists in relation to moving towards a more sustainable society. Minty emphasised that their approach is to set out to try and understand stuff rather than necessarily being ‘effective’. Nick added to this, stating his cynicism towards some of the ways in which environmental issues are currently tackled. He identified the important role of questioning which artists can play when faced with the challenges of resource depletion or climate change, rounding off the session with an open-endedness which chimed with the unpredictable and dynamic qualities of the evening’s early activities.