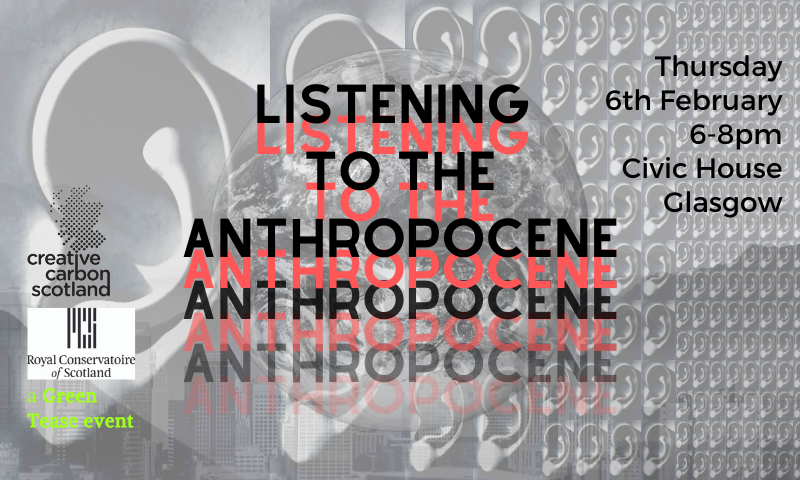 Listening to the Anthropocene image

6th February 2020: This event brought together musicians, geographers and campaigners to discuss the concept of the Anthropocene, the proposed new geological epoch marked by human activity, and the role that music and listening could play as a means of illuminating our understanding of this particular issue and how we as humans interact with the rest of our world.

Emily Doolittle kicked off the event by leading everyone in a listening exercise. We first listened to what we could hear now in our location at Civic House, which sits nearby to both green space and a major road. We then tried to remember a soundscape of the past and noted the things that perhaps we don’t hear now. Suggestions included children playing in the street, the sound of a horse and cart rag and bone man, typewriters, and electric milk floats. Then we were asked to imagine what a future soundscape might be and whether our impulse was to imagine this positively or negatively. Suggestions here included thoughts about no internal combustion engine cars, lots of drones, fewer planes, and maybe more kids playing in safer streets.

The aim of the exercise was to open up attendees to considering how our sense of place is strongly (albeit usually unconsciously) influenced by how we hear it, as well as how listening can be a way of understanding our world, an alternative to our normal emphasis on the visual. Is the non-directional, diffuse experience of listening a more appropriate way of understanding how our world is shifting than the focused, specific experience of looking? The rest of the event sought to interrogate this issue.

Deborah Dixon spoke about how early geologists used poetry, music, visuals, intersecting with the arts in a very different way to how we think of geology now. She further suggested that geology is a ‘field-oriented discipline’ in that tactile and sensory information derived from feeling, hearing and tasting is of vital importance.

Deborah discussed how, from an earth sciences point of view, there exists a kind of ‘geosemiosis’. History is the signs which are written in the rock strata and can be interpreted. She also argued that we should use the term ‘an Anthropocene’ rather than ‘the Anthropocene’ and noted that there were many different definitions and names for it, depending on people’s point of view, but that all of them tend to miss emphasising the complex human processes that together have force enough to shape the entire Earth system.

How do we look for the sounds of human forcing of the climate? Bioacoustics! Sound and recording can capture biodiversity loss and change as well as variations in the environment in alternative ways. These sounds can intimate an exchange or a loss in the makeup of our world, as well as an indifference, or an obligation. She quoted some examples of discussions of the importance of sound by geologists, such as:

‘Listen to your footsteps over dry and wet sand beaches. How different those sounds are from the coarse crunch produced while walking on a gravel beach or from the fine crunch of ash while walking up a cinder cone. And both are distinctively different from the clinking sound made while walking on the crushed glass and pumice of an obsidian dome’, Ray Pestrong 2000

Emily Doolittle then spoke about how she had been interested in birdsong for some years now, and the difference between how humans and animals use and consider and organise sound.

She noted that birds, in her example the Hermit Thrush, process sound much more quickly than we do, so what sounds like a babble to us has more structure to them – when you slow it down you hear much more detail. But nobody had written about this before as ornithologists and musicians don’t communicate with each other well.

She noted that some mammals are considered to have ‘song’ as birds do – whales, seals, bats – and that the importance of communication through sound is prevalent throughout the natural world.

She played some recordings of bird song and then the same slowed down, so that we could hear the detail and then she played an extract of her own composition, which responded to the birdsong.

Tamara van Strijthem then spoke about Take One Action, a film festival that uses film screenings and discussions as a means of provoking positive social change. The 2019 festival hosted a number of screenings of the documentary film ‘Anthropocene: the human epoch’ alongside talks and discussions.

She threw out a number of provocations, including ‘How do we communicate about a crisis as fundamental as the one we face?’ and how do we enable people to understand and accept the level of crisis and then seek to change?’, ‘What do we seek, as participants in an arts event that addresses climate change, that other forms don’t offer?’.

Stuart Macrae spoke about his opera Anthropocene, with the libretto by Louise Welsh. It is set in the Antarctic, where a ship of scientists and researchers becomes stuck in the ice.

The title was a bit playful. They initially called the ship on which the passengers are stuck ‘The Anthropocene’, seeking to indicate a sense of hubris, but also the sense that it is the humans who have caused the problem of climate breakdown and now they have to deal with it. Gradually the whole opera took on the same title.

During the process of composition, many people asked him would he use recorded sounds from the Antarctic but he decided no: like the marooned people on board, he’d have to rely on the resources available to him – in his case in the orchestra and the theatre.

This was followed by a question and answer session. There was talk about the need to avoid trying to ‘bridge’ the gap between art and science in collaborations but to rather acknowledge the differences and seek the shared aesthetics. Scientists and artists share more than we think in terms of understandings and curiosity.

After a break we then broke into four groups, each led by one of the panel members, as follows:

Stuart focused on the question ‘What role can musicians have in aiding conceptualisation of environmental issues?’. The discussion centred around what skills musicians have to offer that are not found elsewhere in the environmental movement, whether musicians need to have a ‘unique’ role to be useful, and the difficulties in knowing which methods are effective.

Tamara looked at ‘How can we make sure that artistic work produces real action?’. Responses included:

And Deborah asked ‘How can music/art go beyond ‘communicating’ about climate change?’. Responses included: This database is for members of the Green Tease network. It mixes people... Are you interested in using arts and culture to help create a more...