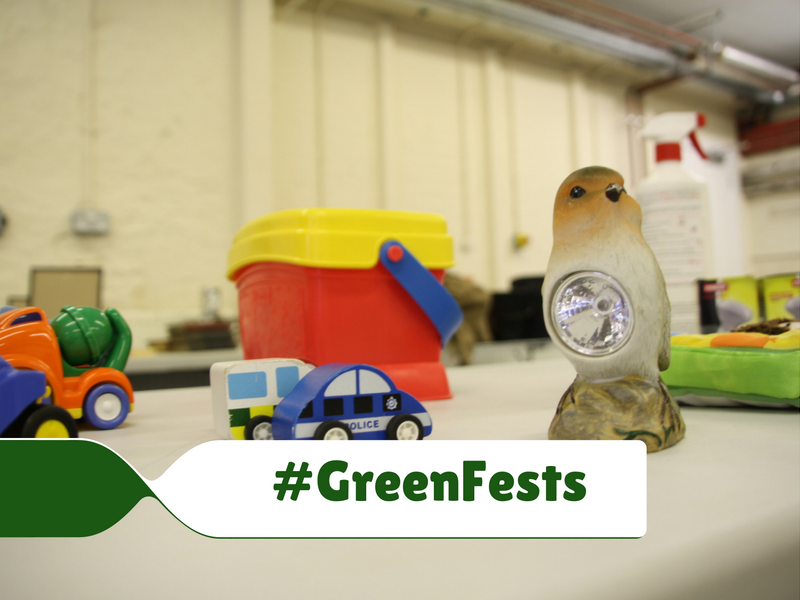 As everything Fringe-related winds down, the Fringe Swap Shop, running on Sunday 28 and Monday 29 August, was here to give old props, costumes, set pieces, materials etc. a new home after their Fringe run.

This year the Swap Shop accepted flyers and posters from individual productions that were to be recycled as well as production pieces. Highlander International Recycling had sponsored a container, which quickly filled as production companies dropped off unused flyers, programmes and other paper. 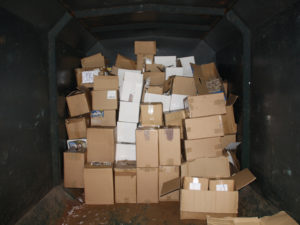 The paper collection after only a few hours.

It is always difficuly for productions to gauge how much printed publicity material they will need – so much depends on the reviews they get, the success of their digital marketing and even the weather! But hopefully many of the productions here will have noted the surplus and will be ordering less in the coming years.

Next door, the tables filled equally fast with leftover set pieces, props and materials. Everything from patches of fake grass and beards to a whole keyboard were up for grabs for anyone who was willing to take it, and throughout the two days the Swap Shop was visited by many Edinburgh residents and visitors from further afield to catch a glimpse of the wonderful weirdness of the Fringe – and to potentially take a little bit home with them. Several even returned one or more times to make sure they wouldn’t miss that one perfect piece they were looking for.

The Fringe Swap Shop is organised every year by Fringe Central to
help visiting productions get rid of their set, props and other 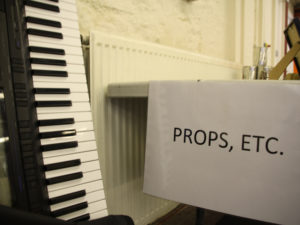 materials in a sustainable and responsible manner, while also giving the local community the chance to find treasures and maybe make up for the takeover of the city for a month every year.

Objects were dropped off from companies all over the world – Canada, the USA, Asia, and Europe. But the visitors picking up items were no less international and diverse – we had children’s toys going to South Korea, books and clothing that were picked up by an Italian performer and others going to the USA.

Some ideas people had for the things they were taking away

We will be following some of these objects in the future to see what happens to them, so watch this space for ideas and inspiration for next year!

Many of the things that weren’t collected were picked up by the SHRUB Cooperative, a Swap and Reuse Hub based close by on Guthrie Street. Entirely run by colunteers, the Coop aims to save carbon, give back to the community and provides a space for a wide range of workshops year round. Materials beyond repair are being taken to the appropiate recycling facilities – the Fringe takes its toll on materials as well as people! All other objects left behind that do seem usable are then donated to local charity shops. In this way as much as possible is kept out of landfill and the copious amount of waste generated by the Fringe minimised, yet another positive of the Swap Shop.