Home / News / #GreenFests: Behind the Wheel 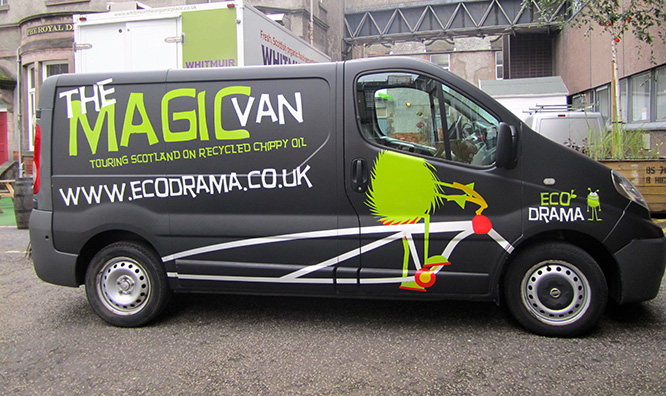 Robert Llewellyn, actor, comedian and writer well known to some for his role as Kryten in the British sitcom Red Dwarf, presented his latest foray (“Electric Cars are Rubbish. Aren’t They?”) to a captive audience at Assembly Rooms this past Thursday.

The message at the core of Llewellyn’s talk was the idea that it is perfectly possible to run the British Isles on renewable energy, despite sceptics’ reservations about the capacities of renewable energy to provide enough power to the grid. Llewellyn elucidated his initial involvement with automotive alternatives to the traditional combustion engine, bringing the inception of his personal involvement to a specific moment on Sunset Boulevard, in Los Angeles, when he first realised he was in the passenger seat of a hybrid automobile. Not knowing much about the technology, Llewellyn was compelled to find out more.

What exactly had happened in Los Angeles that had prompted engineers to create the hybrid engine? Llewellyn noted chronic air pollution had been found to be increasing the incidence of asthma and lung disease among Californians. Thus, the government decided to pass legislation to combat this issue.

After speaking through the recent history of the electric vehicle, Llewellyn addressed the following common misconceptions about electric cars-

The energy put into electric vehicles comes from coal, that’s not sustainable.

While it is true in the UK that some energy does come from the burning of coal, there is also an increasing amount of nuclear, wind and solar energies accounting for electricity production in the UK. Electric cars are “fuel agnostic” in that it doesn’t actually matter how the electricity is being produced, they run the same regardless.

The electric vehicle has limited range, you will get stranded on the side of a motorway.

While range anxiety is certainly a feeling all new electric car owners experience early in their converting, Llewellyn asserted the feeling soon passes. With an increased availability of charging points, and an impressive mileage range, electric cars are improving daily in their viability.

Electric vehicles are a “silent menace” and dangerous for cyclists, pedestrians and other drivers.

Llewellyn noted that this fallacy assumes that the drivers of electric cars have a misanthropic mission to diminish the world’s population, one pedestrian at a time. This is, obviously, not true. He did share an amusing anecdote of the reaction horse’s have to the car, though we can imagine this is really only a common occurrence in rural towns such as the one where Llewellyn resides.

There’s no charging infrastructure, I can’t take my electric vehicle for long trips.

This may have been a problem many years ago, but with over 6,000 charging points available in the UK this is simply not the case anymore. Next Green Car offers a helpful map to locate the nearest charging points. 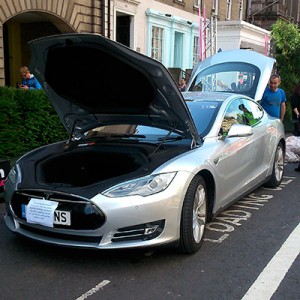 To accompany his talk, Llewellyn parked a Tesla Model S in front of Assembly Rooms, a perfect example of an electric car for those who do not want to compromise style or luxury.

In all, Llewellyn made a convincing argument for the electric vehicle, but did acknowledge that is a new technology, anticipating the industry to grow exponentially in the years to come. However, we can’t ignore other alternatives to the traditional petrol-burning automobile.

On Saturday we visited Summerhall to speak with Eco Drama, another one of the contenders for the Edinburgh Fringe Sustainable Practice Award for their production The Worm- An Underground Adventure. Aside from the theatre company’s commitment to communicating green themes to a young audience, they also travel sustainably. Eco Drama owns and operates a bio diesel van, called “The Magic Van”, that helps transport the company’s sets and production materials.

The Magic Van has been in use for roughly five years, and runs on oil reclaimed from Indian and Chinese takeaways. Emily Reid, Creative Director of Eco Drama, explained that while it is often assumed the oil being pumped into the van is from chippie shops, oil from Indian and Chinese takeaways is easier to filter and better for the van. Bio diesel vehicles have 85% lower carbon emissions than a traditional diesel run vehicle, and by using a local supplier, Eco Drama has been able to participate and expand a niche market. The company’s not run into many problems with the vehicle, despite their extensive touring throughout Scotland. Reid shared that the company is particularly interested in using reclaimed bio diesel fuel, as the used cooking oil would have gone to waste otherwise. Reclaimed bio diesel doesn’t carry the same implications as manufactured bio diesels such as ethanol made from corn, as it is a previously unused by-product of an existing consumption process that is now being saved from going to waste.

Whether you chose to run on electricity or reclaimed bio diesel, there are a number of solutions to the dilemma of the modern-day automobile, offering touring companies and individuals new alternatives to decrease their carbon impact when travelling is not optional.

(Important to note- The Magic Van has a distinct aroma when running, though we didn’t notice any drastic immediate increase in our cravings for Chinese takeaway)

Electric Cars are Rubbish. Aren’t They? was a one-off event at Assembly Rooms on 7 August 2014. Eco Drama’s The Worm-An Underground Adventure runs 12, 16 and 17 August at Summerhall.