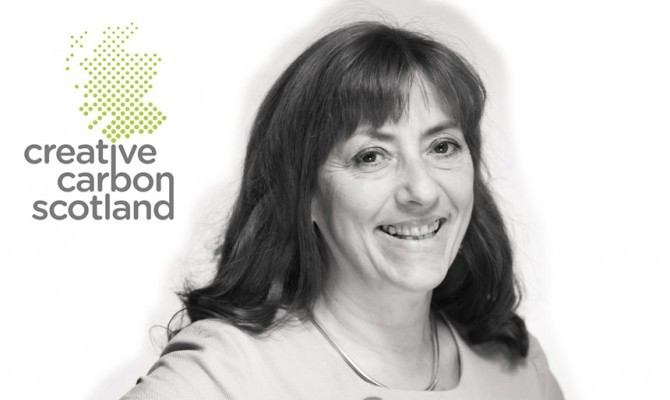 The Edinburgh International Festival was founded shortly after the end of the Second World War with the intention of rejuvenating the cultural sectors of Scotland, Britain and Europe. As people came to terms with the tragedies of recent years, the festival set about facilitating the social change that was needed. This intention is one that is still shared by many festivals today, but can it be achieved? What do we need from our festivals to accomplish social change?

Last week, Creative Carbon Scotland (in conjunction with Festivals Edinburgh and the Edinburgh Festival Fringe) hosted an event to discuss just these questions. ‘Changing the World, Festival by Festival’ was presented by Ben Twist, experienced theatre director turned founder and director of Creative Carbon Scotland, and Stella Hall, fellow of the Royal Society of the Arts and freelance festival director.

In fact, Stella Hall is nothing short of a festival guru. Current Festival Director of Darlington’s award-winning Festival of Thrift, she was also:

Not to mention the fact that she is a board member of the Wildworks Theatre in Cornwall, ISIS Arts in Newcastle, ArtsAdmin in London and was a member of the Music, Drama, Dance and Performing Arts panel of the Research Excellence Framework. Long story short, Stella Hall knows her festivals.

Although this event had the format of a formal talk, it was more of a conversation between Ben, Stella and all who attended, many of whom were themselves prominent members of the arts world. With Stella’s expertise as a festival director, Ben’s in-depth knowledge of sustainability in the arts, and the knowledge and experience of all there (including performers, festival organisers, and marketing executives to name a few) a very interesting discussion ensued. Impossible to summarise, here I simply present what I took to be the main points of debate.

The first of these was the importance of the discomfort zone. Herein lies the possibility of change. For Stella, the discomfort zone is the place she must enter when trying to put on a festival that satisfies the needs of people with different motivations and ideas from her own. The key to finding a solution that suits all is not only to enter this discomfort zone where your own perspective and convictions are challenged, but to stay there. The longer you stay in the discomfort zone with someone, the more likely it is that you will find a connect, a point of agreement around which a compromise can be constructed and progress made.

The discomfort zone also works as a direct driver for change. Festivals wishing to create social change arguably need to include events which challenge attitudes towards the status quo. The audience are forced to genuinely consider their own position. What’s good about it? What’s not? What change in attitude or action is required? The active engagement required from audiences in response to such events are likely to have stronger consequences than passive attendance at one that merely dictates an alternative approach.

Image courtesy of The Guardian

One such way of engaging is to create a sense of community ownership over the festival. It has to come from them, they have to see it as theirs. Stella found this was particularly important when she directed the Preston Guild. It is a Prestonian institution and belongs far more to the city and its people than to a festival director. Stella found that acknowledging this and allowing the people to put on the festival that they wanted was crucial to its success. 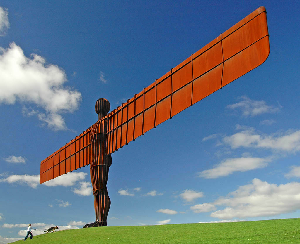 It was noted, however, that there is a certain tension between giving the people both what they want and what they need. Many people, myself included, don’t often actively seek challenges to their existing viewpoints, which means we can miss out on new ideas. The example given in the talk was that of Sir Anthony Gormley’s Angel of the North (see right), which, because it was something entirely different and new, would likely never have been created had we designed the statue to be built.

There is also the challenge of creating this sense of community ownership in the face of a huge influx of new people coming specifically for the festivals. Major summer festivals like Glastonbury, Reading, T in the Park and, of course, the many Edinburgh festivals are particularly vulnerable to this. Whilst locals are often glad that the festivals occur (78% of Edinburgh citizens believe the festivals to be positive and 60% participate) they often feel separate from them. The festivals happen to them rather than with them as it were.

As well as better engaging with existing communities in the festival locations, one way to garner the sense of ownership that is required for social change is to engage with the communities that are created by the festivals. This can be an intentional community, as in Darlington’s Festival of Thrift which attracted people with a particular interest thereby facilitating discussion. They can also be unintentional, for example similarly themed shows in the Edinburgh Festival Fringe who find themselves performing alongside and socialising with performers with similar ideas and interests.

The challenge of creating lasting social change in these circumstances, as opposed to with pre-existent communities, is that the existence of these communities is so strongly tied to the festivals. Despite being connected by a shared idea, once the festival ends these communities are forcibly disbanded. Modern technology can go some way towards helping people keep connected (and indeed including those interested parties that were unable to physically attend) but it is difficult to maintain the momentum and drive that can be inspired during the festival.

The key to changing the world, festival by festival then seems to be twofold. First, the festivals must be events that encourage audiences to engage with the area in which change is desired, that question the status quo and provide an alternative perspective to be considered. Second, they must create lasting communities of the converted (for lack of a better term). This can be by including the local community and helping them develop a sense of ownership of the festival. It can also be by facilitating the creation of a new community, intentional or otherwise, that forms in response to the ideas being promulgated. If enough people are inspired then there is real hope that lasting change can be achieved.

[Images courtesy of Creative Carbon Scotland, The Guardian and Flickr].