#GreenFests highlights: Can Festivals Change the World? with Di Robson

On 14 August 2014, a room of festival organisers, arts administrators and creatives gathered at Fringe Central to share their insights into the concept of festivals and the role of festivals in today’s society. Festivals Edinburgh and Creative Carbon Scotland hosted the event, attended to maximum occupancy.

First, we heard from Di Robson, who delivered fantastic provocations from her extensive global experience organising festivals. For Di, festivals act to re-enchant audiences with the role of place in our lives. One of many significant points from her experience includes her involvement with Mayfest– a theatre, music, dance, and visual arts festival in Glasgow that celebrated “the vast and glorious cultural riches of Glasgow.” Di asserted that Glasgow’s title of the European Capital of Culture in 1990 changed the city, increasing the relevance of Mayfest and engendering the creative energy emanating from the city today.

Moving onto a strand of much more specific social and economic regeneration in her work, Di spoke of the organisation process of the Jaipur Heritage International Festival in Rajasthan. Many artisans’ livelihoods had recently dried up in the area; the festival helped in making their crafts more relevant to the 21st century. The pleasure for Di came in “watching something so raw and unstructured begin to take shape and have social and economic impact.”

In planning a festival, Di believes it is really important to think clearly through your intentions and implementation. Festivals provide an opportunity for dialogue and community expression, drawing links between divided communities, and often enhancing lives through programming. Di reminded us that when working within the creative sector, we cannot deny art’s ability to “make us look up for a minute” on a social, environmental and creative level.

An important point made by Di was that “we need to preserve resources, not only natural but personal and artistic.” As is often the case for short-lived festivals, one-off festival productions don’t always contribute to a longer lifespan for many projects. This cycle of quick production and short-lived performance doesn’t necessarily benefit creative communities, or promote ideas of fundamental sustainability within the arts. (Temporality versus longevity is a topic we also discussed at our Glasgow Green Tease in July 2014, more reading available here)

After hearing from Di, the conversation opened up to audience participants. The energy in the room brought many profound ideas and questions into discussion. A question that arose was- “Are festivals a function of the society in which they operate?”  It was mentioned that when starting the organisation of a festival, the foundations and reason for the event are pertinent. Building from the grassroots up helps establish the local community’s presence within the festival and vice versa. 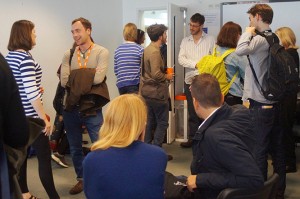 We heard an inspiring story from Ameena Saiyid OBE about the Pakistani Children’s Literature Festival. The festival, hosted in a location between two communities that have been historically divided, brought children together who wouldn’t have otherwise met. Children played together, as if they were completely unaware of the significance in this act of unity. The festival proved that there are ways to engender social change through the youngest generations, building social acceptance and cooperation for the future.

The discussion turned back to the local context of Edinburgh, of which the point was made that the Edinburgh Festival Fringe began as a very local festival and has since evolved to a major festival with international reach. A key reason for this success lies within the governing structure of the Edinburgh Festivals; through this structure the festivals gain a lot of attention and can be driven towards more progressive goals. In this way, festivals are quite similar to a business in the need for structure and clear objectives. However, as asserted by Marina Salandy-Brown, from the Bocas Lit Fest, “the success of festivals depends on our business acumen, but there’s a danger in there.” Often we can become the victims of our own success; upon becoming widely successful, a festival can lose the ideas and aspirations on which it was founded. The solution to this dilemma lies in balancing social and environmental responsibility with the business and financial aspects.

Bringing in one of the original guiding questions of the event, the group was asked- “What is arts’ role in a changing climate?” Callum Madge from Lung Ha’s Theatre Company explained, “you engage people who aren’t necessarily interested in the subject through artistic means” and that art is a way to mobilise thinking, specifically in regards to environmental sustainability.

The emergent and temporal nature of festivals brought a stimulating perspective to the dialogue. This temporality has proven to be a means for overcoming censorship in countries that may have strict laws regulating the arts and expression through the arts. The point was made that in these countries the only way that people can learn, understand and accept the truth is through festivals. Temporality also lends itself to the experimental nature of work produced and showcased at festivals. Tanja Beer, set and costume designer, mentioned the support she’s received from festivals to try new ideas, including a completely edible and biodegradable set. Tanja’s work  is about celebrating sustainability, changing attitudes that green works and the raising of awareness is “boring” or negative. Tanja has found that people are desperate for this type of celebration; many communities have adapted temporary festival projects into more permanent fixtures within their locality.

The lively discussion at “Can Festivals Change the World?” proved the interest and passion for creating events that operate on levels of social, economic and environmental sustainability. Hearing from such an internationally diverse audience brought many perspectives into the conversation, allowing ideas to be shared between people who otherwise would not have been able engage in this knowledge exchange. Di Robson concluded the session, inspiring those in attendance to embrace the freedom of their dreams and visions. “Vision-space is unregulated. We can dream and make these things a reality, if not for the world, for our worlds.”