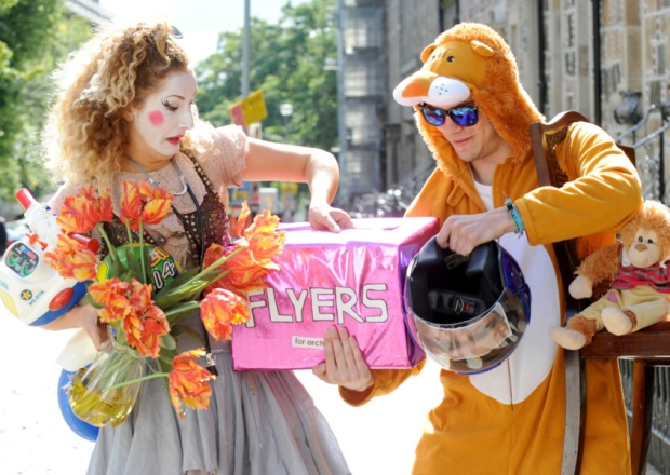 This year’s Fringe Swap Shop (formerly known as the Reuse & Recycle Days) rounded off the end of the summer festivals at Fringe Central 1. From the 30th August through to the 1st September, festival acts had the opportunity to dispose of any unwanted props, sets, materials etc. in a responsible and sustainable manner by bringing them to the Swap Shop, where all donations were up for grabs to anyone willing to carry them.

As always, an unusual and eclectic set of objects came our way giving just a glimpse into the weird and wonderful world that is the Fringe. Who, for example, needed a dinosaur onesie? What was the full-length Native American headdress used for? Did it have any connection to the hula skirt, the snow machines, or the easel? And did the mortarboard come from a show or some neglectful graduate already over the pomp and circumstance?

While the costumes donated provided a feast for the eyes and imagination, bits of set and pieces of furniture also came in forcing us all to sit on our hands and remember that we have nowhere to put a postcard stand. All told, this year we received 19 chairs (including some lovely vintage ones that disappeared very quickly!), 15 tables, a metal arched trellis, and a trick breakable wooden table to satisfy all pranking needs.

Of course, donations form only half of the Swap Shop. The other part is people coming and taking away objects, clothing or materials that they think they can use, either in future productions, in their art, or just in general (many a student has benefited from the occasional chair or fancy-dress costume). One of the nicest parts is talking to everyone who comes through and getting an idea of where they’ve come from and what the future of the objects they’re taking may be.

This year over 300 people came through the Swap Shop and they came from all over the world, from the UK to Canada, the USA, and the Netherlands. Here are some of the ideas that people had for the objects they collected:

We will be following some of these objects in the future to see what happens to them, so watch this space for ideas and inspiration for next year!

Alas, not everything gets collected. The Fringe has taken its toll on some of the materials that come through and a new lease of life isn’t always feasible. All materials beyond repair are therefore taken to the appropriate recycling facilities. All other objects left behind that do seem usable are then donated to local charity shops. In this way as much as possible is kept out of landfill and the copious amount of waste generated by the Fringe minimised, yet another positive of the Swap Shop.

[Top image courtesy of The Scotsman]