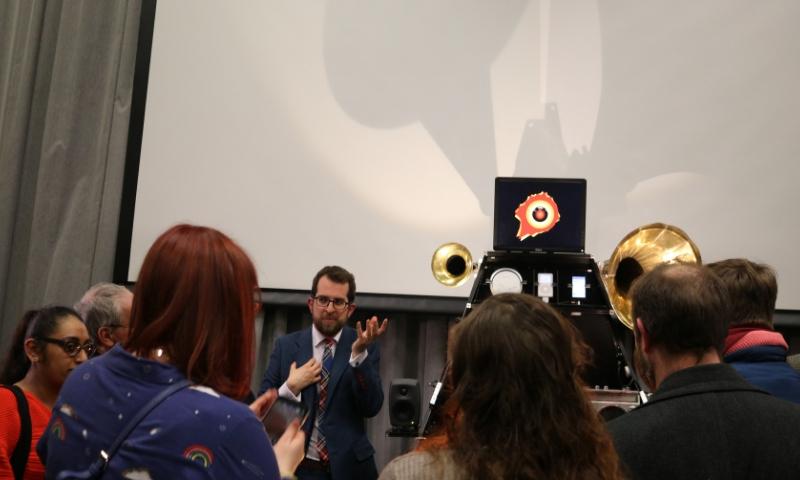 What's the social and environmental cost of recorded music and how has it changed? Listen to the latest episode of "The Culture & Sustainability Podcast", recorded at the most recent event in our #GreenTease series.

We joined Dr Matt Brennan for the launch of his new music venture Citizen Bravo‘s debut album ‘Build A Thing of Beauty’ as part of the Green Tease events programme. The evening also launched a research film project directed by Graeme O’Hara titled The Cost Of Music; and a demonstration of an interactive musical sculpture known as the SCI★FI★HI★FI, which forms the only physical copy of the new album. We took the opportunity afterwards to interview some of the participants at the event, as well as one of the makers of the SCI★FI★HI★FI, about their views on the role of music in tackling the climate crisis!

Listen to the podcast below, or download on your favourite podcast app.

Build A Thing of Beauty

The beautiful illustrated video for “Limbs and Bones”, the first single from the album, was shown during the event.

The Cost Of Music

The short film The Cost Of Music documents Matt’s journey making the album: disillusioned by prevailing attitudes about the disposability of new music and the decline of physical formats, Matt set out to record his own songs and release them in an unusual way: not so much a ‘concept album’ as a musical sculpture that explores the concept of albums as historical artefacts. In doing so, he discovers how the cost of listening to records has changed over the past century: while the economic cost of listening to one’s choice of recorded music has never been lower, the environmental cost has never been higher. 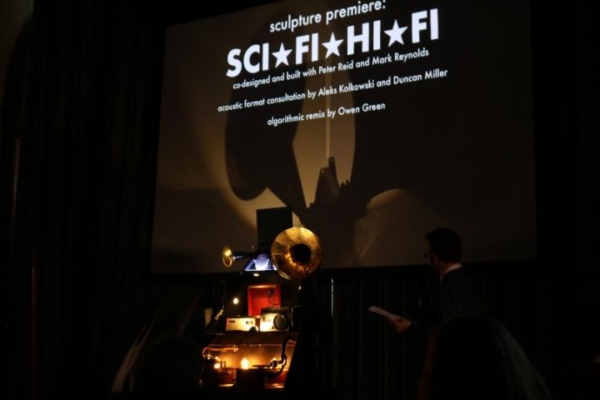 While the album will be available for online streaming, the sole physical copy of the album is a one-off interactive musical sculpture called the SCI★FI★HI★FI. Built in collaboration an electronics engineer (Peter Reid) and metal worker (Mark Reynolds), the SCI★FI★HI★FI is what its name suggests: a science-fiction inspired hi-fi system that can play seven of the most historically significant recording formats (Edison wax cylinder, 78 rpm disc, vinyl LP, cassette tape, compact disc, mp3 on hard drive, and streaming remotely from the cloud). To listen to the album Build A Thing Of Beauty via the SCI★FI★HI★FI is to make sense of recorded music not as a fixed, frozen object but as an historical event unfolding over time. How was recorded music valued before the advent of albums, and how might it be valued after albums are gone? 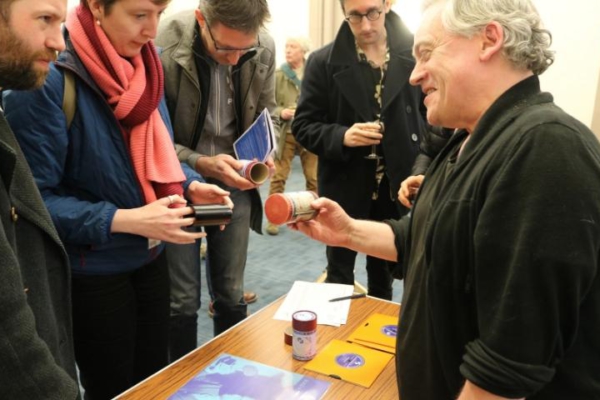 Getting up close with different formats of recorded sound – The phonograph cylinder is the earliest format.

This event was part of Green Tease, a network and ongoing informal events programme, connecting creative practices and environmental sustainability across Scotland.  Creative Carbon Scotland runs the Green Tease Open Call, which is a funded opportunity supporting sustainability practitioners and artists to exchange ideas, knowledge and practices with the aim of building connections and widening understanding of the role of arts in influencing a more sustainable society.

For more information please click on the links above or email gemma.lawrence@creativecarbonscotland.com

The backing track for the podcast is of course an instrumental of the title song from the album Build A Thing of Beauty by Citizen Bravo. The latest episode "Can experiencing fiction and the unfamiliar help to change...

#GreenTease Podcast: Can experiencing fiction and... Can art get people travelling more sustainably? To allow you to hear the full...

#GreenTease Podcast: Can art get people...