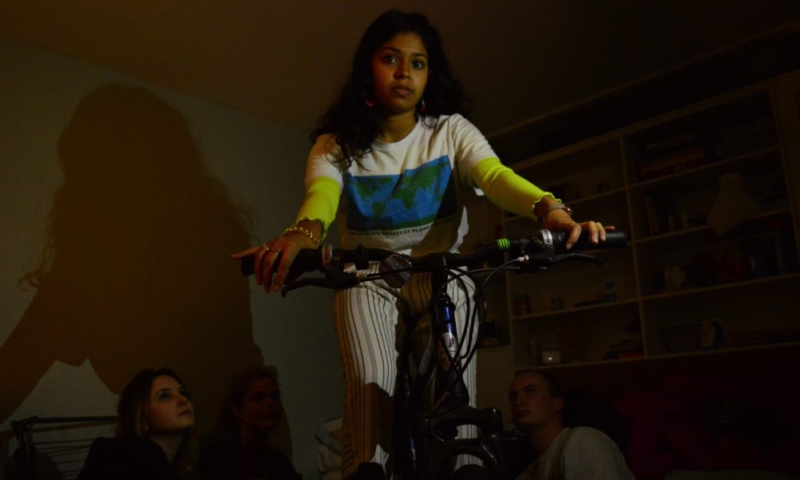 How to Save a Rock - Pigfoot Theatre

Pigfoot Theatre was the winning company in our 2019 Sustainable Fringe Awards. In this guest blog, Bea Udale-Smith (director and performer) and Conky Kampfner (writer and dramaturg) explain the ongoing development and evolution of their production.

A few weeks ago, I read an interview with a writer of a show about climate change (I’ve been trying to track the article down ever since – but I can’t find it!). In it, the writer suggested that all art is now climate art. The idea has stuck with me. At this Edinburgh Festival Fringe , the amount of specifically climate-focused shows is greater than ever before. And even shows which don’t explicitly reference climate breakdown are being made in the consciousness of the climate emergency. The article’s point which at first seemed far fetched is becoming more and more real to me.

This developing consciousness can sometimes feel paralysing. Up until the last couple of years, climate theatre had largely been defined by work like Katie Mitchell & Duncan Macmillan’s 2071, which turned climate scientist Chris Rapley into a performer, delivering a scientific lecture which left its audience with one emotion: mass panic. Relaying facts and conveying the grim reality of the climate crisis is crucial. But maybe there’s another emotion which is more important right now: hope.

We decided the show needed to be carbon neutral long before we knew what it was going to be about. Our lighting is powered by a bicycle, which we cycle live on stage, and by solar-powered lights which we operate while performing the show. Our sound is created live, by our voices, a piano, and objects we’ve found along the way – old tins are megaphones, a broken snare-drum is the sound of a train hitting the tracks, and so on! Finally, all of our production materials – our set, props, costumes – are made from re-purposed materials, built from objects we’d otherwise be throwing away.

It’s taken us almost a year to figure out what the show’s about. Renewable energy, protests, peat bogs, having hope in the face of rising eco-anxiety. We also had to confront (in our personal lives as well as our practice) the urge to hide behind our smaller actions. Using Keepcups, mooncups, tote bags, are all things which are worth doing, but are so often applied as band aids on an open and growing wound. What are the things staring us in the face like the need to divest pensions, like the fact that Shell is only putting 5% of it’s budget into renewable energy?

The most enjoyable side of taking almost a year to figure out what we were trying to do is how much has changed in just 12 months. Greta Thunberg sat outside the Swedish parliament last August. School strikes began internationally in November, and hit the UK by December. By February, an estimated 15,000 British school children were striking for the climate. Extinction Rebellion officially publicly assembled for the first time on 31st October – the day we finalised the first version of our script. 18 days later, 6000 people blocked five main London bridges. By the time we were performing the play for the second time in April, they’d protested naked in the House of Commons, and shut down traffic on Oxford Circus. And now, a year has gone by, and we’ve experienced the hottest temperatures recorded in UK history.

Removing the option to use pretty much every conventional piece of tech, which we previously would not have thought twice about using, has definitely been a challenge. For the Fringe, we’ve re-developed the play and added a lot of music, which we sing (or sometimes hum!), accompanied by our unfazeable composer, Sarah Spencer, on piano. But for most scenes, one of us is also on the bicycle, so we’ve had to get used to singing while cycling. In an early song, all three of us have to jump on and off the bike – we’re all singing at different points, two of us have a dance-break in the middle… We end up quite out of breath, but I actually think that’s great. It’s amazing how quickly you get used to seeing someone cycling while also acting – after a while, you forget they’re even doing something unusual! So some of my favourite moments in the play come when you suddenly remember that one of the actors has actually been cycling non-stop for the last 15 minutes.

The other limitation of using a bike to power our lighting is that its lights only have two states (on or off!). But, luckily, these days solar lighting comes in pretty much every shape or size you might want, and – unlike our bike’s lights – we can move it around, and play with it while performing. For a scene which takes place in Blackpool, for example, we have to create the effect of the Blackpool Illuminations. We use solar-powered, multi-coloured lightbulbs, which are very sweet and simple, but definitely don’t do the Illuminations justice. But then again, I guess that’s the fun of theatre – your job is to create the idea of things. Being carbon-neutral has meant we’ve had to strip everything back – we need the audience, their imagination, and belief, to finish the picture.

After the Fringe, we’ll have to re-develop the show. Partly because we are always interested in understanding how different audiences respond to our theatre and adapting around that, but mainly because climate change is an issue which is always – well – changing. The most exciting part of making this show has been responding to developments in the world around us. Not just reports which fill us with fear, but to the news of reform, of protest, of uproar, and of hope.

Pigfoot Theatre was the winner of our first Sustainable Fringe Company Award, excelling with their carbon-neutral production and audience call to action. Their 2019 production, How to Save a Rock is at Pleasance Pop-Up: Dynamic Earth from August 10th-23rd (not 15th) at 11.30am.

More information and tickets on the Edinburgh Festival Fringe website.

Creative Carbon Scotland at the Edinburgh...