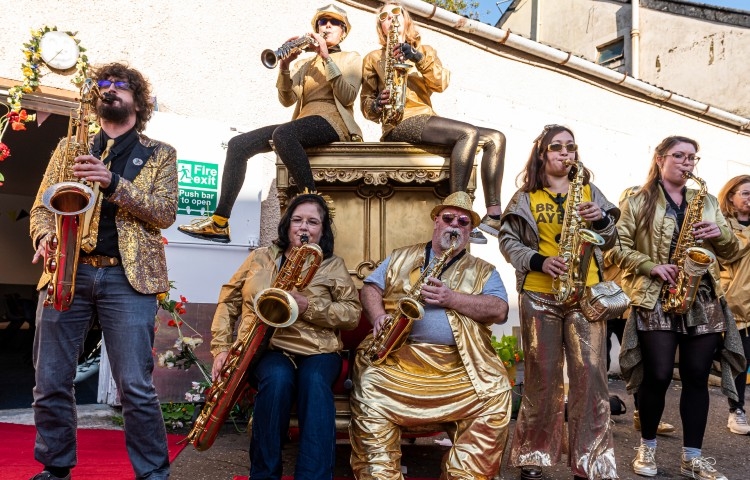 Blog #6 in a series of blogs from playwright Lewis Hetherington about his work with Glasgow cycling charity Bike for Good and Creative Carbon Scotland.

I can’t believe it’s almost six weeks since the launch of Let’s Go! our film about cycling, community and climate change after many months of getting to hang out with the wonderful people of Bike for Good. The premiere was, fittingly, at their Southside Hub. We were delighted that this film, celebrating their ethos, was first publicly viewed in the place it was made, with so many of the film’s stars amongst the audience.

We had the red carpet out, a twelve-piece brass band called Brass Aye?, a giant golden throne, flower bedecked archways, not to mention an extensive selection of fancy dress for those who wanted to glam up for the event. Not a single thing was bought or made for the event; it was all borrowed, repurposed, upcycled… It felt so important that the design matched the politics of the film. It certainly made me think how vital it is that we consider every part of an artistic process as green, not just the content. It’s totally possible to create spectacle without it costing the earth. 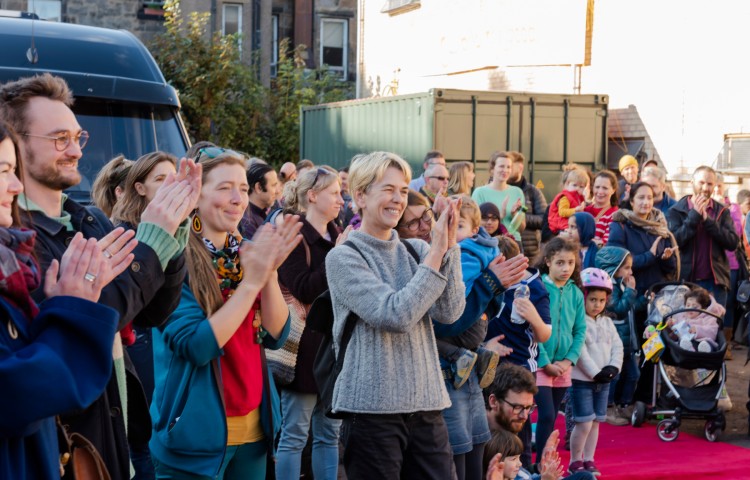 The centrepiece was, of course, the film itself, presented on a pedal-powered projector no less! The projector needed two bikes going at some lick to be operational. As a matter of fact, the projector did fail a few times! This lapse in power was great; it really drew attention to the amount of energy it takes to run even a relatively small and domestic piece of technology. At the heart of this film, I think, is a gentle but firm and steady plea to re-imagine our relationship to the world, by considering the impact of our everyday existence. The simple act of seeing the effort it takes to power a projector really underlined this idea.

We showed the film twice to a packed room – some people stayed to watch it both times! The feeling of compassionate interaction on screen was mirrored by the warmth and generosity of those watching. We had plenty of volunteers to pedal the bikes and provide power; noticeably far more young volunteers than older ones. There were scores of young people ready to put their energy into making things happen, a hopeful metaphor for the future perhaps, but I’m looking at us grown-ups to say – we still have to step up. We can’t just cross our fingers for the next generation sorting it out.  It’s not about feeling bad, it’s about taking action, wherever we can, whenever the opportunity presents itself, to make the choice to make the world better. 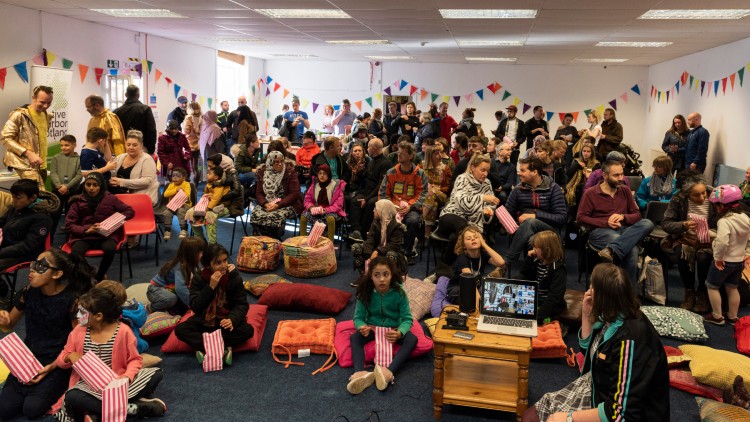 After each screening we invited people to sit on our giant golden throne and talk about the film to ask what had caught their attention? What had it made them think about? At the end of Let’s Go! one of the young people was asked what he would do if he was King of Glasgow, and he said, rather brilliantly, that he would “be nice to people”. 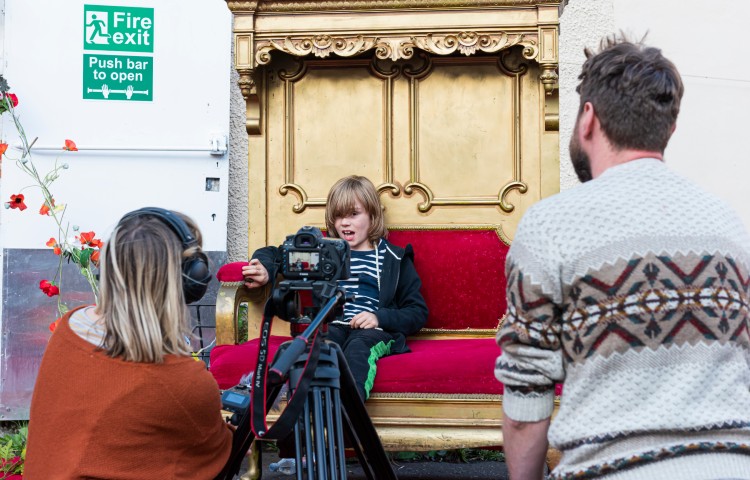 So we invited people to comment on what they would do if they were in charge. The answers were as varied, brilliant and bonkers as you might expect. We’re currently working through all the footage to make a series of mini films, which we can’t wait to share early next year.

Once again it was almost all young people that came forward. Their plans and environmental ambitions were hugely optimistic and uncompromising, and maybe that’s what we need; wide-eyed energy, hope and a total refusal to accept that we are aiming for anything other than perfection. We might not get all the way there, but if perfect is our direction of travel then one might hope we’re at least on the right path.

Read the other blogs in this series:

#2: The joy of the present and the great unknown of the future (September 2018)

This embedded artist project is part of Bike for Good’s VeloCommunities Project, which is funded by the Scottish Government’s Climate Challenge Fund.

Please get in touch with Creative Carbon Scotland’s culture/SHIFT Producer Gemma.lawrence@creativecarbonscotland.com if you wish to find out more about this project or more about other culture/SHIFT projects which support collaborations between artists and environmental initiatives.