The fifth in a series of blogs from playwright Lewis Hetherington about his work with Glasgow cycling charity Bike for Good and Creative Carbon Scotland.

Stick with me on this one folks. I’ve let my thoughts wonder freely.

Do you feel like you’re single when you film? That you’re not in the video or something?

This quote is from one of the young members of the Bike for Good community. She was asking Geraldine about the nature of filmmaking.

As the film making process has gone on we’ve been encouraging them to take the camera from us. To point it at whatever they want to see captured.  And in this moment she quite unexpectedly turned the camera away from the group to point it at the two of us. As you can see I didn’t even have my jumper on yet. She asked me some questions about why I liked cycling, whilst I was still catching my breath from just stepping off my bike. And then she turned to Geraldine and said:

Do you feel like you’re single when you film? That you’re not in the video or something?

Which has lodged in my brain as such an interesting question about what we’re doing as artists making this film, are we in it? Instinctively I think yes, we are in it. But in what way?

In a literal way now that we’ve encouraged the young people to point the camera at us. But also of course Geraldine and I are making choices about what to film, when to film. We capture things that interest us, in a way that we find illuminating, or pleasing, or thought provoking. Those points of interest though are always part of a feedback loop with Bike for Good as an organisation and the people who are part of it. They direct and guide the choices we make. It made me perhaps understand better my job title on this project, as ‘embedded artist’.

The importance of embedding

Beyond that though it made me think even more deeply about art and nature. It’s obviously a fairly massive topic and one I increasingly find myself preoccupied with, and this quote made me think about the importance of embedding myself and my making in the living world that I’m part of.

That sounds very grand, but I suppose it’s about trying to move away from the way that, one can argue, art distances us from nature. A beautiful landscape painting on the wall, is like a window we look out of, nature is over there, we are here. But in fact we are nature, nature is us, we are nature. And by extension art is part of nature because it’s something we seem to have always done naturally. Mark making, meaning making. I’m lightly dipping my toes in deep waters here and if any of this feels interesting I’d recommend a book called Queer Ecologies in particular an article called queernaturecultures by David Bell, or reading Timothy Morton who writes (a lot) about the importance of collapsing our romantic ideas around nature and waking up to the reality of the ecology that we are part of.

That opening quote also made me think about some of the fascinating theories around communication which I encountered when I used to work with deafblind people for Sense. There was a broad term which covered the gestures, sounds and body language used to interact with those who did not have formal language, and that term is co-created communication. It means you create your own micro language in the moment with your conversation partner/s. It demands real heightened presence, to be able to receive and transmit meaning when you don’t have a pre-existing set of rules to rely on. And really that could describe any meaningful interaction.

I’ve been thinking a lot about this as I wonder about making art in a climate emergency, perhaps we need an aesthetic revolution were we don’t just document and observe nature but acknowledge our non human collaborators as we attempt to co-create this world we find ourselves sharing. 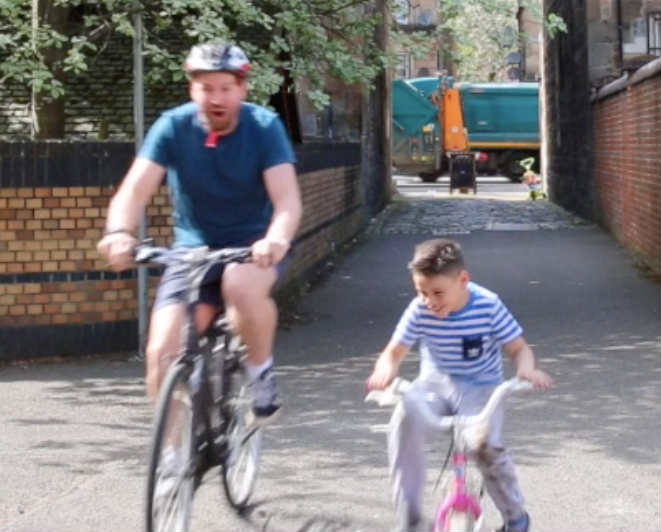 The images in this blog are screenshots from moments which may or may not make the final film. I was trying to capture cleaner images at first until I realised how much I liked the blurriness. It reflects that everything is alive. It’s all permeable. There is no neatly composed image that says everything we need to say. There is just a constant loop. Of communication. Of meaning making. Of co-created communication.

Lewis is working embedded with Bike for Good for two years in their VeloCommunities project to contribute to their activities widening access to cycling and helping Glasgow to become a more sustainable city.