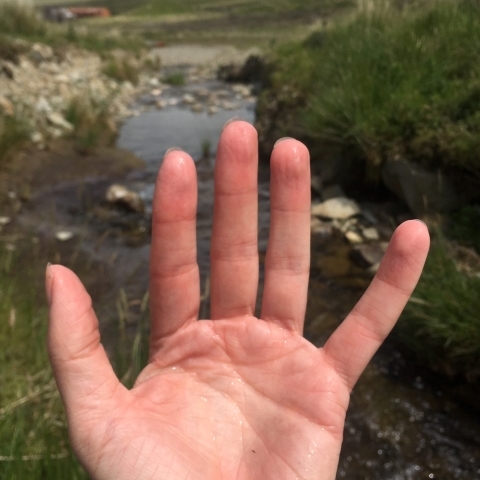 In the midst of winter, James Bonner recalls a summer cycle I took on 21 June 2019 to the source of the River Clyde.

For the past few years I’ve sought to cycle somewhere significant on the summer and winter solstices – dates around 21st June and 21st December. These cycles have become a bit of a ritual-like pilgrimage for me.

For summer solstice this year, in the middle of my doctorate in which I am thinking about water, I thought to pedal to the source of the River Clyde – that body of water I see every day in my home city of Glasgow. I took the train to the town of Lanark and started cycling. This is some writing I did a couple of days later and, in a period in which I was struggling to write for my doctorate, this flowed out like a torrent. It fundamentally shifted the way I was writing in my research – I started to use the first person more frequently, and included much more about how I felt. It was a bit of a watershed moment for me in many ways. Reflecting on it later I started to see how it was influenced by some of the literature and writing that had been inspiring me in my research – in its ideas and style. Specifically, and as is probably evident to anyone who has read his work, the beautifully poetic words of nature writer Robert Macfarlane. And one of his influences, Scottish poet and writer, Nan Shepherd.

In academia it seems we learn to explain our research in terms of what we ‘think’, but often forget to explore how it makes us ‘feel’.

On Friday 21st June 2019, for solstice, I cycled to water. This is a short account of that journey:

I left Lanark on my bike with a rough course in mind to follow the Clyde to its source. I stayed as close to the water as roads allowed me, criss-crossing the river several times. Leaving it, but then coming back. It would disappear, then reappear, as I moved. For a long stretch I followed it near the motorway. A stream of cars and people to one side. The river to the other. I felt more for, and of, the latter.

After about 40km I left the main road toward Daer Reservoir – understood to be the ‘source’ of the Clyde. I talked to sheep to give them forewarning so they could clear from the road ahead. Some kites came down to look at me and swooped overhead. We moved together for some time.

Crossing the river more and more, it was increasingly moving in a lazy meander. Its path less constrained and ‘rational’. It is shaped by the landscape’s topography, but also forming the land as it went. A relationship of water and rock – creating and reshaping one another.

The road got rougher – moments to be apprehensive on a road bike. You worry about your tyres. But, at the same time you think this means I am further ‘away’, and that’s what I wanted. And that contradiction and unsureness is good.

I cycled on and eventually came to the reservoir. A gleaming body of water opened up – beautiful and peaceful. But there were warning signs. Danger, deep water, private. Water gives life, but it can take it. It doesn’t make sense. On along the waterside. I only planned to come this far and the road is narrowing. But I was flowing and I kept going.

I was intrigued. I was at the ‘source‘. The start. But at the ‘end’ of the reservoir I could see several smaller streams flowing into the water. And when I got there it was clear that this wasn’t the ‘source’. Feeding the reservoir are dozens of different sized streams and little watercourses. Coming down from the hills, the valley beyond, out of the landscape itself.

While my map indicated this is the ‘start’, being there it was clear that this is not the case. There is a water ‘behind’ or ‘beyond’ the water. A whole other layer. There is no ‘source’ or ‘start’. No linear narrative. The Clyde doesn’t ‘begin’- it’s a gathering process of its everyday, every-minute, every-second, emergent being. Where waters assemble and dissemble. Merge and separate. Shift and shape. And this NEVER stops. Any ‘map’, no matter its accuracy, paused this flow. It couldn’t ever represent the lived ‘reality’.

I was too far now and hungry. A gate, gladly, stopped me going further. I got off my bike at one of the many little streams that were not on my map. Hidden waters that don’t ‘count’. Water beyond the water – sources of the source. As ever, I TOUCHED the water’s surface. And when I did, I was sensing a few droplets of water molecules – the ones surrounding the surface of my hand. I ‘know’ this, as science tells me so.

But I have come to ‘know’ for something else about water. That when my skin touches the skin of the water, I am touching the whole stream. And the stream joins the reservoir. And that makes the Clyde. And that travels all the way back to Glasgow, and eventually to the sea. And that sea is part of the ocean. And all oceans.

That’s hard to comprehend. How to make sense of that? It’s ‘non-sense’, surely! But, at that moment of touch, it makes complete sense. A common sense.

The water and I have some ‘thing’ in common. We are the same. I am touching it. It is touching
me.