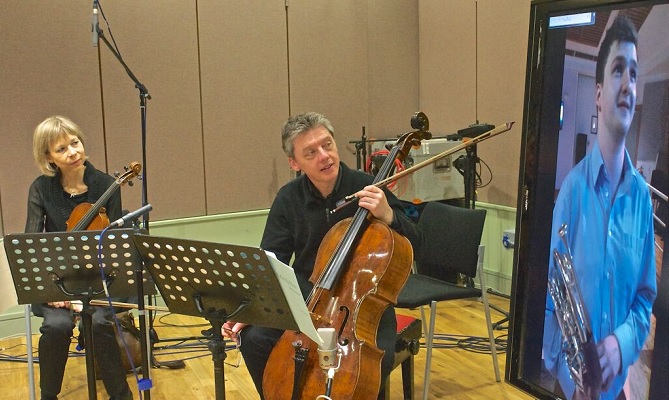 Hebrides Ensemble recently launched their Digital Programme with a digital masterclass using LOLA: LOw LAtency audio visual streaming system. Those of us who were lucky enough to attend witnessed the Composer James MacMillan and Hebrides Ensemble running a masterclass from Edinburgh on MacMillan’s Horn Quintet, with horn players located in London and Trieste.

Hebrides Ensemble’s quintet of performers, together with the composer himself assembled in a rehearsal room on the Napier Campus in Edinburgh and were able to rehearse with two young musicians, one based in the Royal College of Music in London and another in the Conservatorio di Musica Giuseppe Tartini located in Trieste.

For those of us watching, the musicians and the students were able to play together and interact and respond to visual and auditory cues which made the Masterclass impressively effective.

The online communication system which has been dubbed LoLa – in recognition of the extremely low latency, or delay, introduced into the signal during transmission can now operate with a delay that is so short that it is possible for musicians to play together in locations which are several thousands of miles apart.

The project was originally developed by the LoLa project team in the Conservatorio di Musica Giuseppe Tartini in collaboration with GARR, the Italian Research and Academic Network and they are actively promoting the use of the system worldwide.

Dr Paul Ferguson of the Creative Industries Department at Napier University has been working with the group in Trieste to replicate the system in the UK and has previously successfully demonstrated its use for a concurrent rehearsal involving musicians based in Edinburgh and London.

This latest demonstration has shown that the system can be just as effective over much larger distances. As part of a longer term research project, Hebrides Ensemble’s Digital Producer Gill Davies is working with Dr Ferguson and the team at Napier to allow professional musicians to connect to other musicians across Europe.

Although in its early stages the system is seen as having significant potential for helping artists based in locations which are remote from each to work together with high quality visual and audio communication. The team at Napier are interested in hearing from any members of the Arts Community in Scotland who would like to explore the use of the system for their own practice.

Hebrides Ensemble will be speaking about their LoLa system at our 50 Shades of Green: Stories of Sustainability in the Arts Sector conference on 6 October 2015.