Rural Nations Scotland CIC is proud to present the programme for this year’s Hebrides International Film Festival 2016: Islands and Environment. 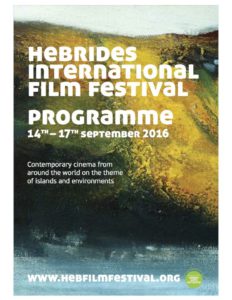 We are pleased to be partnering with An Lanntair Arts Centre who will be our hub for this year’s festival, screening our entire programme across its main auditorium and newly launched Pocket Cinema.

The film festival has attracted films from around the world, and we are thrilled to announce that this year the screenings will include a UK premiere.

Award winning, Caribbean produced film, Vanishing Sail will open the festival with it’s UK premiere, which will take place simultaneously in our An Lanntair and Berneray venues on Wednesday 14th September at 8pm.

The opening of the HIFF festival and premiere of the film on our shores will see the town harbour filled with sailing craft in a parade of sail arranged with the help of Sail Stornoway.

Many of the first boatbuilders on the Caribbean island where Vanishing Sail was filmed, came from Scotland so we were very excited when Rural Nations invited us to open their 3rd Hebrides International Film Festival. We were inspired by their commitment to bringing meaningful international stories to their remote islands… Alexis Andrews, Director

This years festival can boast a similarly exciting line up of contemporary, award winning environmental features and documentaries. As well as a great selection of shorts, from both seasoned and emerging film makers from around the world.

From Norwegian blockbuster The Wave to newly released family film Swallows & Amazons. International success story Hunt for the Wilderpeople and hard hitting documentaries The Messenger from the US, Fire at Sea from Italy and The Islands and the Whales from Scotland just for starters.

There’s plenty of ways to get involved with the festival this year, with environmental themed events and talks arranged in collaboration with the North Harris Trust, RSPB Scotland and local businesses.

As well as free archive screenings from the National Library of Scotland’s Moving Image archive bringing a look at island life as it was.

Special guests this year will include Loic Jordain, French film maker and his latest release, The Turning Tide In the Life of Man for a masterclass in long form documentary. As well as award winning Canadian director, Charles Wilkinson, who will join the festival from Vancouver for a discussion on his approach to green film making with his feature doc Haida Gwaii.

The full programme is now available online and tickets are available to book at hebfilmfestival.org