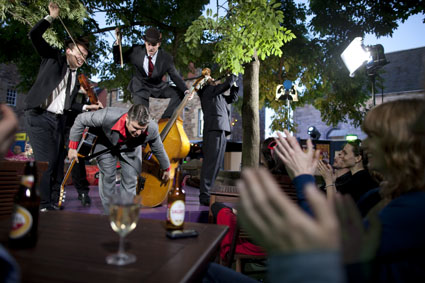 Applications are now open for the 2014 Fringe Sustainable Practice Award, celebrating the greenest and most sustainable shows on the …

Applications are now open for the 2014 Fringe Sustainable Practice Award, celebrating the greenest and most sustainable shows on the Edinburgh Fringe.

This project, a partnership between Creative Carbon Scotland and the Center for Sustainable Practice in the Arts, rewards shows which engage their audiences with sustainability, take responsibility for their environmental impacts, and think big about how the arts can help to grow a sustainable world.

Applications are open from February 19th to July 18th, with a shortlist announced in The List on July 30th, and the winner announced in a ceremony at Fringe Central on August 22nd.

“We believe artists and cultural organisations are uniquely placed to address the challenges brought on by climate change,” says Ben Twist, Director of Creative Carbon Scotland.

“This major award celebrates and publicises their innovative work during the Festival Fringe.”

The award for Sustainable Production on the Fringe was first launched in 2010 at the Hollywood Fringe and Edinburgh Festival Fringe.

“We see the arts as the best driver of sustainable societies and it’s not just our opinion: data shows that performance promotes positive environmental, social, and economic impacts,” says Ian Garrett, Director of the CSPA.

“The fringe model provides an ideal platform to start working with sustainable ideas through all of the freedoms and restrictions the festival allows!”

Creative Carbon Scotland is a partnership of cultural organisations using the arts to help shape a sustainable Scotland.

Shows can apply now at http://www.sustainablepractice.org/fringe/

Previous Edinburgh recipients include: The Pantry Shelf (2010), a satirical comedy that takes place in any ordinary pantry shelf, produced by Team M&M at Sweet Grassmarket; Allotment (2011) by Jules Horne and directed by Kate Nelson, produced by Nutshell Productions at the Inverleith Allotments in co-production with Assembly; The Man Who Planted Trees (2012) adapted from Jean Giono’s story by Ailie Cohen, Richard Medrington, Rick Conte and directed by Ailie Cohen, produced by the Edinburgh’s Puppet State Theatre; and How to Occupy an Oil Rig (2013), by Daniel Bye and Company, produced at Northern Stage. Awardees have gone on to future success on the Fringe and presentations around the world including as close as Cardiff for World Stage Design, and as far as New Zealand and all across the US and Canada.