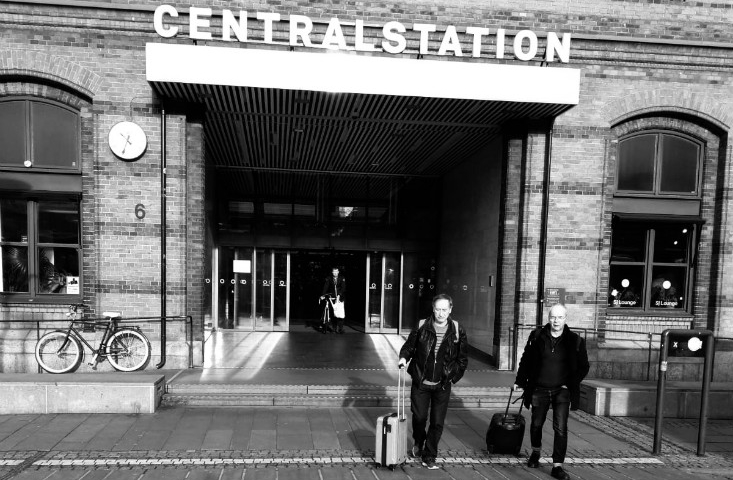 In November, five colleagues from Scotland, two from Dublin and three from Ghent in Belgium travelled by train to Gothenburg in Sweden for the second of four ’transnational meetings’ as part of the Creative Europe project Cultural Adaptations, of which Creative Carbon Scotland is the leader.

It was a long journey (two days +) from Scotland and Ireland, but provided an ideal opportunity to put Creative Carbon Scotland’s money where my mouth has been for some time now, as I have argued that the cultural sector, and everyone else, needs to cut back on air travel in response to the climate emergency. In a previous blog I provided some tips about how to plan and book a long distance train journey, so in this one I’ll write about the experience, challenges and pleasures of the trip.

As I’ll explain below it wasn’t totally smooth and I recognise that train travel for work reasons is not feasible for everyone; some of our team did fly because they had work and family commitments. The trip from Scotland or Ireland to Gothenburg goes via London, Brussels (overnight), Hamburg and Copenhagen (overnight). On the way, because of time zones and schedules, it is two and a half days; on the way back, you can do it in two days, overnighting at Hamburg. See Seat61.com here for advice.

I have to admit it was costly, compared to flying – though the comparison is probably not quite as bad as you’d think. For the five from Creative Carbon Scotland to get from Edinburgh city centre to Gothenburg city centre it cost just over £350 each, including overnights (although not food). The cost of a return flight with baggage for one of our colleagues who flew was £366, but you need to add to that the cost of getting to and from the airports at each end, and the fact that his flights meant that he couldn’t attend the first (admittedly optional) event of the meeting. To do so he’d have had to leave at an unearthly hour to catch a more expensive flight, which would probably have meant a night in a hotel, or to have travelled the day before and overnight in Gothenburg, adding to the costs. There are very cheap flights from Edinburgh to Gothenburg, but only on certain days, so he had to go via Frankfurt, probably doubling his carbon emissions.

Again, I have to admit it was a long trip, which not everyone could take the time to do (freelancers for whom every lost day of work costs them even more; people with small children, people whose quite unreasonable employers won’t let them have that sort of time etc.). Taking the flight via Frankfurt, it meant leaving central Edinburgh by about 11am and our colleague arrived at about 10pm local time, so ten hours in total.

If you use a wheelchair or have other mobility impairments, if you’re blind or have other disabilities, such a long journey would be very difficult, if not impossible: the sheer number of changes, some quite tight, the getting to and from hotels etc and the working out of what to do if a cancellation or delay occurs would make it very tricky.

This was interesting. I’m a good worker on trains – I set writing and reading work aside that I know I can do without perfect wi-fi and that needs a period of undisturbed concentration. I sit myself down in a window seat with a table and just get to it. I did some useful work of that sort on this trip, but less than I had planned, largely I think because I was travelling with more people and we kept having good conversations! It was also at the weekend, which probably meant I felt less required to work.

There were some disruptions to our travel, which meant I had fewer tables to work at and busier trains. But this turned out to be great bonding time: arriving at Flensburg (in Schleswig-Holstein, near the German/Danish border, since you ask) just as the café was closing, we had to transfer to a dreaded Bus Replacement Service (I thought these were characteristic of the UK, but apparently not) because our train from Hamburg had broken down. We all bought wine and snacks and had a great time, devising quizzes, playing games and generally getting to know each other, finally arriving in Copenhagen very late at 1.30am. I genuinely think this had a positive impact on the transnational meeting, as we had done quite a lot of the initial getting to know each other and had had some very useful discussions on the way.

When it comes to disruptions, one of the big surprises for me was that just about every Deutsche Bahn train that we got was either cancelled, delayed so that we missed a connection or broke down! So much for Vorsprung durch Technik. There’s an important economic point here, backed up by a German friend I spoke to over Christmas. The current German government has a strict ‘no budget deficit’ policy, the Black Zero, which means they haven’t been investing in infrastructure. My friend and I discussed my problems with the trains, which he says are typical. The German Green Party, which has long moved on from being the single-issue pressure group that many Green parties are seen as around the world, is arguing for greater investment in infrastructure, green energy and transport.

The tips and lessons

This was a useful experiment. We learned a great deal about what it means to undertake this sort of trip by train and gained some useful tips i.e. stay in hotels close to the station! avoid Deutsche Bahn!). Generally, I had a good time and I think my fellow travellers did too. We certainly got to know each other better, in a way which I think would be unusual in the rest of our work lives.

On the other hand, unlike getting to Belgium, the Netherlands, western Germany and most of France, which you can easily reach in a day, it’s difficult to recommend travelling to Sweden from Scotland by train rather than air because of the financial and the time issues. But I’d argue that this should make us ask whether trips are necessary and appropriate, rather than that we should just board planes willy-nilly. I’m not the only one to make this claim: we all know about Coldplay deciding not to tour until they can sort out the carbon emissions; and Massive Attack are mapping the impacts of their touring. Less publicised is change in the fairly conservative world of classical music: as the agent Jasper Parrott wrote in the Guardian in December: ‘Musicians and artists need to be disruptive in challenging assumptions about how our industry operates – and we all need to make real changes.’ When classical music agents, who make their money out of sending large numbers of players abroad, are getting with the project, something at last is happening.

Closer to home, Amateo, the European Network for Active Participation in Cultural Activities, managed by our own Jim Tough, recently encouraged members to travel to (possibly easier to reach than Sweden) Utrecht in the Netherlands by sustainable means, and the Informal European Theatre Meeting has been talking to Creative Carbon Scotland about how it reconciles the challenge of global heating with its structure of members from over 50 countries meeting regularly in different parts of Europe. Meanwhile, academics, another band of heavy travellers, are also beginning to face the facts. However, COP26 in Glasgow in November will cause a vast amount of air travel – and I see no change taking place there.

I recognise this is a challenging issue for most people working in the arts and probably quite a lot in climate change: travel is a part of work and domestic life, and convenient air travel particularly is a difficult one to give up both practically and emotionally. I’ve been banging on about it for ages, and I have worried that I’m just ‘virtue signalling’ to make myself feel better. So I was pleased to see an article in Nature (you may only be able to access the abstract), which confirms that ‘people who themselves engage in a given behaviour will be more effective advocates for that behaviour than people who merely extol its virtues—specifically because engaging in a behaviour credibly signals a belief in its value.’ (Todd et al, Nature 563, pp245-248 October 2018). To which end I’m proud to say that in recent months I’ve foregone appealing trips to Turku in Finland and Lisbon in Portugal, and I’ve turned down forthcoming opportunities to go to Portugal (again) and the lovely and prestigious Banff Centre for the Performing Arts in Canada, instead delivering talks by video and Q&As by video-conferencing. The team and I at CCS are getting better at doing this to a high standard.

Meanwhile, I’m off to Belfast this weekend by bus and ferry for an ill-advised 96th birthday party – a route that is shockingly ill-served by the UK’s transport network, which says something about how Northern Ireland is perceived in our country. Bon voyage!

The Project Cultural Adaptations is a co-operation project funded by the...