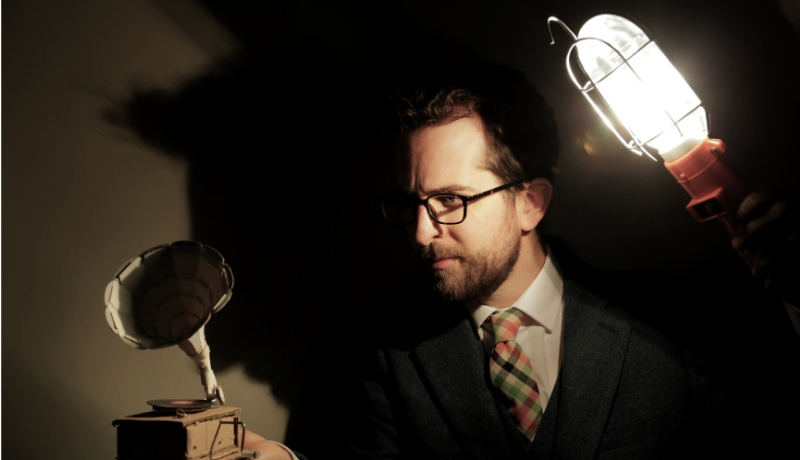 Chemikal Underground Records announce the exciting news around the launch of Citizen Bravo, a new music venture by Matt Brennan, who led the Fields of Green research which Creative Carbon Scotland collaborated on. As part of our Green Tease programme we're taking part in the launch event for the new album and 'interactive musical sculpture'.

It gives Chemikal Underground Records great pleasure to introduce the unabashed geek pop of Citizen Bravo, AKA songwriter, multi-instrumentalist and music researcher Matt Brennan. His remarkable debut album Build A Thing Of Beauty will be released on 5 April 2019 exclusively on digital services, save for one, extraordinary and thoroughly unique physical manifestation – an interactive musical sculpture known as SCI★FI★HI★FI, which will be premiered at the launch event Green Tease: Citizen Bravo presents “The Terrifying Miracle of Recorded Sound” at the University of Glasgow Concert Hall on 11 April 2019. Completing this ambitious hybrid music and research experiment is a short documentary film The Cost Of Music, which will be screened as part of the sculpture launch event in Glasgow, ahead of further screenings at Berklee College of Music in Boston, Université du Québec in Montreal, the Australian National University in Canberra, and further tour dates to be announced. The video for the album’s lead single “Limbs And Bones,” was released on 15 March 2019.

Citizen Bravo is Matt Brennan, a dual citizen of Canada and Scotland. Born in Nova Scotia and raised in New Brunswick, he immigrated to Scotland at the age of twenty-two to study and make music. In the mid-2000s, Brennan was a founding member of indie pop group Zoey Van Goey (Stuart Murdoch of Belle and Sebastian produced the band’s debut single, and the group released two well received albums on Chemikal Underground Records before disbanding in 2012). Citizen Bravo marks Brennan’s first outing as a solo artist. Drawing on musical influences ranging from Jonathan Richman to Robert Wyatt, Brennan recorded the album with the help of friends including Andy Monaghan (Frightened Rabbit), Malcolm Benzie (Withered Hand), Raymond MacDonald (Glasgow Improvisers Orchestra), and Pete Harvey (Modern Studies). Brennan also found inspiration in scavenging and manipulating orphaned samples from antique recording formats and integrating them into his songs.

The Cost of Music

The short film The Cost Of Music (directed by Graeme O’Hara) documents Matt’s journey making the album: disillusioned by prevailing attitudes about the disposability of new music and the decline of physical formats, Matt set out to record his own songs and release them in an unusual way: not so much a ‘concept album’ as a musical sculpture that explores the concept of albums as historical artefacts. In doing so, he discovers how the cost of listening to records has changed over the past century: while the economic cost of listening to one’s choice of recorded music has never been lower, the environmental cost has never been higher.

By day, Brennan works as a music academic at the University of Glasgow. His research draws from his practice as a musician and vice versa. In the case of Build A Thing Of Beauty, for example, the album’s release coincides with the publication of videos presenting collaborative research on the economic and environmental costs of recorded music, including new research findings on how the price consumers have been willing to pay for recorded music has changed across formats and over history. Similarly, the sole physical copy of the album is a one-off interactive musical sculpture called the SCI★FI★HI★FI, which will tour as part of a series of public lectures in 2019.

Built in collaboration an electronics engineer (Peter Reid) and metal worker (Mark Reynolds), the SCI★FI★HI★FI is what its name suggests: a science-fiction inspired hi-fi system that can play the music of Citizen Bravo on seven of the most historically significant recording formats (Edison wax cylinder, 78 rpm disc, vinyl LP, cassette tape, compact disc, mp3 on hard drive, and streaming remotely from the cloud). It explores how playback technology changed the parameters of musical work at different moments in history: from two minutes of lo-fidelity mono sound on wax cylinder, to a streamed AI-composed remix that is unstoreable and infinite in length. To listen to the album Build A Thing Of Beauty via the SCI★FI★HI★FI is to make sense of recorded music not as a fixed, frozen object but as an historical event unfolding over time. How was recorded music valued before the advent of albums, and how might it be valued after albums are gone?