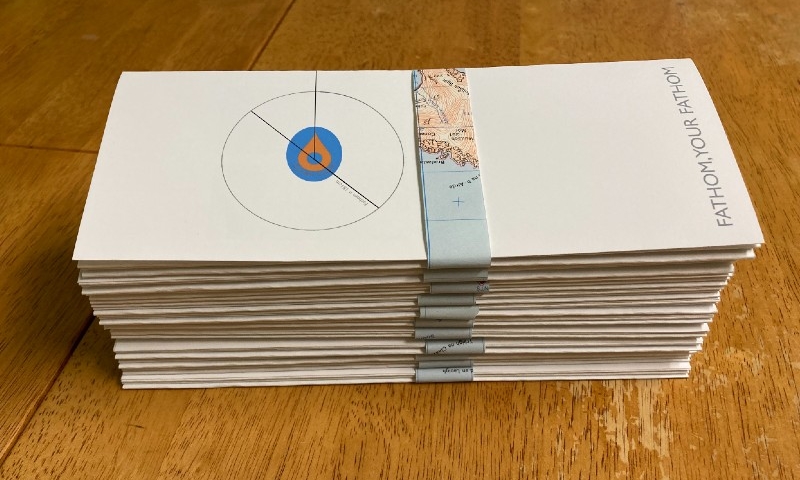 A stack of folded printed fathoms with a circular graphic in the centre and the words 'fathom your fathom' across the bottom. Each is loosely bound by a strip of map.

Creative Carbon Scotland is pleased to share new artworks and a film created by artists Saoirse Higgins and Jonathan Ford, as part of our collaboration with Seas of the Outer Hebrides, part of the SEUPB-funded MarPAMM project, exploring new ways of engaging with communities about marine stewardship through creative approaches.

In August 2021, Orkney-based artists Saoirse Higgins and Jonathan Ford were selected to collaborate with SEASOH, working towards the delivery of a collective vision for the seas of the Outer Hebrides.

As part of the project the artists created a film, The sea around us – the encircling sea, a poetic reflection on islanders’ relationship to the marine environment and the power of the sea. In this blog we describe the process by which the artists engaged with communities and their intentions behind the creative work produced.

‘Cùram Cuain – Embrace the Sea’ branding developed by the artists

Following the Saoirse’s and Jonathan’s appointment, the SEASOH team quickly set to work developing and sharing ideas for how we could engage local communities in this exciting next phase of the project – ranging from chain letters sent between islands to an expedition by boat to survey a local Marine Protected Area (MPA). Saoirse and Jonathan brought a raft of inspiring ideas to this stage, aided by sketches and visuals shared over the Zoom screen to help illustrate their thought processes with the wider team. With assistance from local poet Anne Frater, the artists identified the Gaelic phrase ‘Cùram Cuain’, meaning ‘Embrace the Sea’ in English, which became the overarching concept for the project, encompassed by three key strands as well as its own brand to identify with and spark interest in the activities being planned. 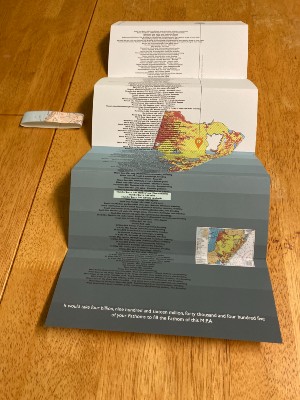 A printed fathom map ready to be sent.

The first strand invited community members to become ‘Fathomeers’. A fathom is an old measurement that was used in the past to measure the depth of the sea and was also used to measure on the land. A fathom describes each person’s measurement across their outstretched horizontal arms from fingertip to fingertip. It also means to embrace arms – faedm – in old Norse. Community members were invited to send their own fathom measurements to Saoirse and Jonathan, which were then mapped against important sites in MPAs surrounding the Outer Hebrides. Bespoke maps were made and sent to each person who submitted their fathom, gifting them their own section of protected island ocean life to adopt – a piece of the sea to look after and explore, linking back to the species and habitats highlighted through the project Storymap.

In previous consultation events community members had identified the physical and conceptual inaccessibility of MPAs as a barrier to understanding and involvement in MPA management. The project helped to address this by forging physical and emotional connections between islanders and specific areas within MPAs, whilst making the sea life held within them more visible and better understood.

Building on this core idea of creating unexpected and inspiring ways of connecting islanders to their marine environment, the artists then collaborated with SEASOH on designing and delivering a group sea swim in an MPA on Bayble Beach in North-East Lewis. Members of the SEASOH team made important connections with Colin Macleod, founder of the Hebridean Wild Swimmers group, who helped to spread the word and joined in force on the day, as well as organising press coverage and a slot on Isle FM radio station to promote the event. On the day, swimmers were gifted specially designed Cùram Cuain blue and orange swim caps and braved the high winds to perform a ‘group fathom’ in what the artists described as ‘a special moment in time, connecting in body and mind with this area of protected sea’. 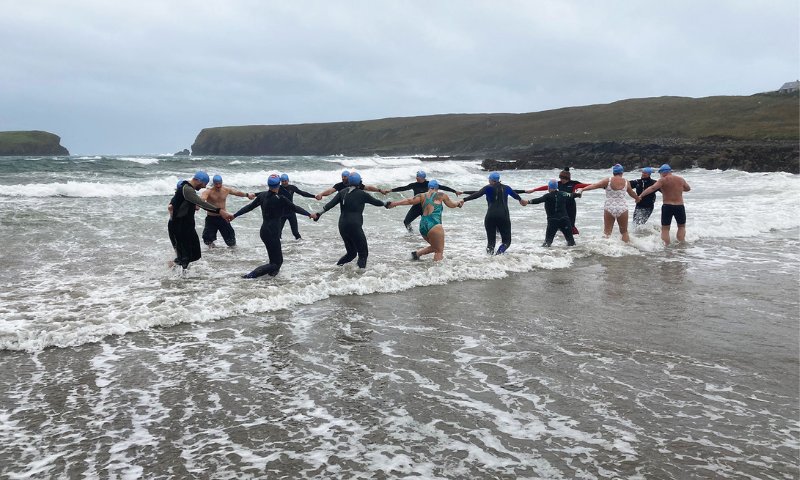 The wild swimmers at Bayble Beach.

On the day, we were lucky enough to be joined by Ian Stephen, writer, artist and storyteller from the Isle of Lewis to creatively document and reflect upon the performance:

The turnout on this wild day might be astonishing. None were naked but the range of costume was wide. Some just had the simple swimsuit and cap. Others had partial wetsuits, woolly hats worked for others. The look on the faces (I was observer, not participant) was not pain but joy.

Ian’s reflections can be read in full here.

The second stage of the performance took place in Ionad Stoodie Hall, the floor of which had been transformed by Saoirse and Jonathan into a luminous gridded ‘map’ of the sea. Measurements of participants fathoms were taken and drawn in chalk onto the grid using a bespoke DIY fathom rope compass. Once everyone in the group had completed their circle, they were invited to lie down in it for a couple of relaxing minutes, as a soundtrack of the sea drifted over them. They were asked ‘If you could ask the sea a question, what would it be?’ ‘If you could embrace something from the sea, what would it be?’ Responses were gathered by the team and the fathom measurements were used to create the fathom maps described above. 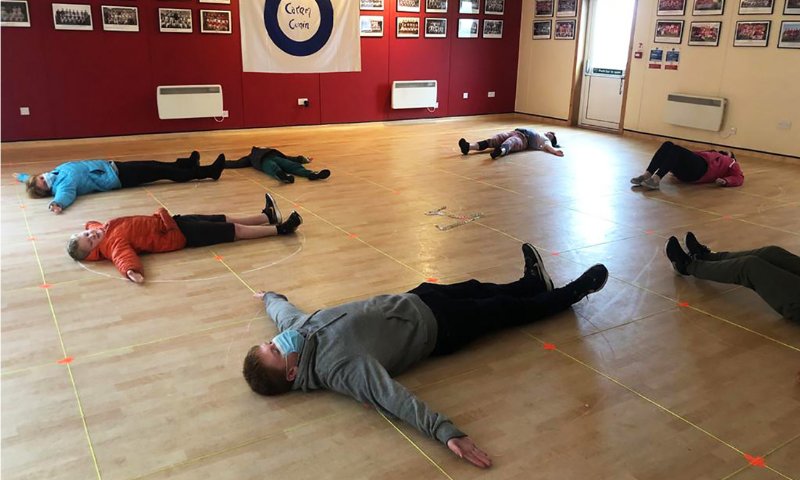 Community members lying in their fathoms.

The sea around us – the encircling sea film

In the final stage of the project the artists reflected upon their experiences from the Cùram Cuain performance and islanders’ relationship to the sea through a poetic short film. The film contains poetry excerpts from Orcadian filmmaker and poet, Margaret Tait, known for her avantgarde ‘film poems’ containing footage island life and seascapes, and combines footage from multiple angles from above and within the sea. As well as sharing this powerful image of a community’s engagement with the marine environment, the film poses a more serious question – ‘are we calling time on the sea?’ – inviting viewers to consider our collective responsibility in protecting it.

The sea around us – the encircling sea by Saoirse Higgins and Jonathan Ford. Closed captions available.

By the mark 2 – Two strips of leather pass through our hands.

The sea too is effected by gravity
It hugs the circumference of the earth, drawn towards the centre.

By the mark 3 – Three strips of leather pass through our hands.

It doesn’t fall off the earth,
Splashing away out into the stratosphere,

By the mark 5 – A piece of white cloth passes through our hands.

Flung as spray off the globe by its daily birling around,
But stays there, swishing about at the land.

By the mark 7 – A piece of red cloth passes through our hands.

The moon pulls at it too:
It’s not too far away.

By the mark 10 – A piece of leather with a hole passes through our hands.

The moon’s pull is called gravity too,
But isn’t strong enough to pull the water right out to it.

By the mark 13 – A piece of blue cloth passes through our hands.

What it does is pull and tug at the lumps of water on the turning earth
So that first it’s going one way
Then another,
Dashing against the land on one side
Then on the other.

By the mark 15 – A piece of white cloth passes through our hands.

Isolated bits of land get in the way
And the sea in its mad rush to get to the moon,
Where, of course, it will never get,
Goes tearing round those islands
First in one direction
And then back again.

By the mark 17 – A piece of red cloth passes through our hands.

It never gets anywhere except to where it came from,
But keeps up that regular surge and heave
Of the tides
As it hurls itself
For ever towards the moon.

By the mark 20 – A string with two knots passes through our hands.

The ocean that shatters the rocks
Is having its surface puffed off into clouds
Which will be ocean again some day.
I drink the ocean
And have met the fish
Which never reach the surface…

Fathom text written by Jonathan Ford and read by Saoirse Higgins. Excerpts from ‘Cave drawing of the waters of the earth and sea’ by poet and filmmaker Margaret Tait, 1958. With kind permission from The Margaret Tait estate.

A huge thank you to everyone involved including all those who participated in the project events and making of the fathoms, the artists and SEASOH team.

Find out more about MarPAMM – Seas of the Outer Hebrides through the project Storymap and keep an eye out on the project website for updates on an upcoming community consultation.

This project was part of Creative Carbon Scotland’s culture/SHIFT programme, which supports collaborations between arts and sustainability practitioners to address the climate emergency. The measurement, like many, is based on your own body. It also involves a... Here we share some reflections on the event from Project Officer Charlie Main,...

A dip in a Marine Protected Area: Reflections...