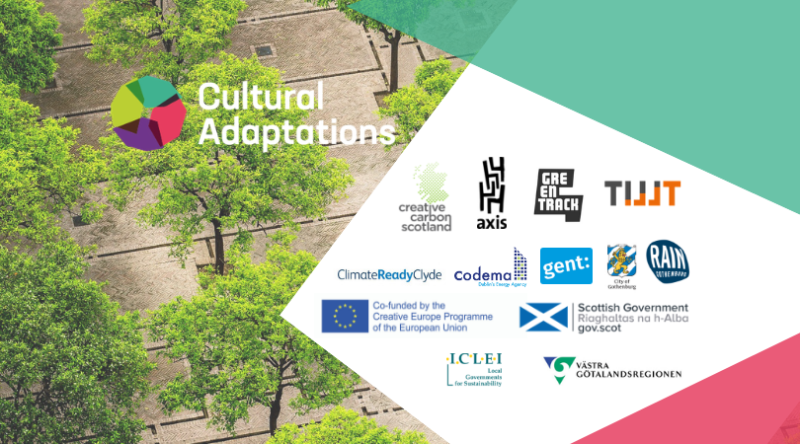 Cultural Adaptations was a Creative Europe project, led by Creative Carbon Scotland with partners in three EU countries, on culture's role in society's adaptation to climate, and the adaptation issues that cultural organisations need to think about.

Cultural Adaptations was a co-operation project funded by the European Union’s Creative Europe programme, running from October 2018 to March 2021, and led by Creative Carbon Scotland. The project focused on culture’s role in society’s adaptation to climate change, and the adaptation issues that cultural organisations themselves need to think about.

Four cultural organisations explored collaboratively how this approach can work in countries with similar climate challenges but differing socio-political frameworks. Each cultural partner worked with a local adaptation partner:

Over the 30-month project, a number of activities took place to explore different aspects of the project:

Each pairing organised a meeting attended by all the partners, who participated in a workshop to disseminate the methodology to local cultural managers and a review of the embedded artist project. NB: due to the COVID-19 pandemic at the beginning of 2020 some of these meeting had to be realised online.

In addition, several overarching activities took place, based in Scotland but focused internationally:

Cultural Adaptations attracted strong evidence of demand for its outputs, with the Scottish Government’s Climate Change division committing significant funding to support the conference, the four local adaptation partners committing their staff time over 30 months and the ICLEI (Local Governments for Sustainability) network committing to attending all the transnational meetings and the conference to help with communicating the project outputs to a world-wide audience.

Cultural Adaptations (EUCAN) was co-funded with the support of the Creative Europe programme of the European Union and the Scottish Government. Developed from four years of experience and lessons learned from the... Adaptation is like recovering from a debilitating disease (in this case,... The urgency of climate change requires us all to think about sustainability in... In early 2017, Creative Carbon Scotland teamed up with Adaptation Scotland,...