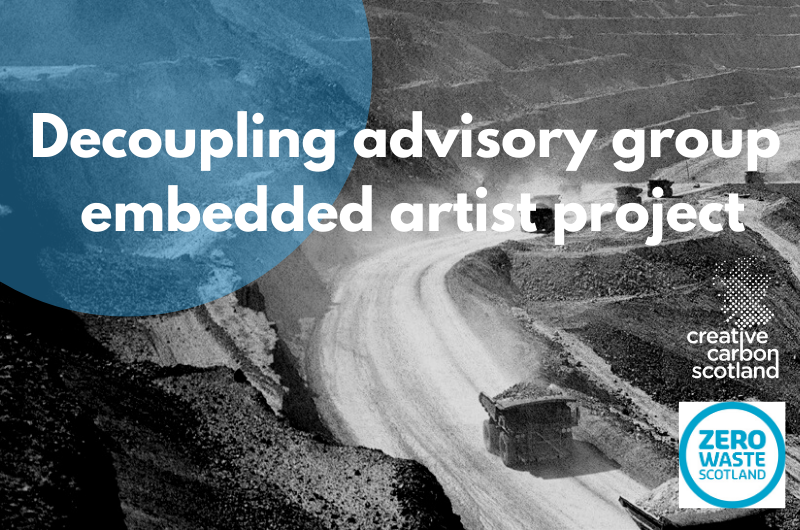 Zero Waste Scotland and Creative Carbon Scotland are working on an exciting project that embeds a filmmaker into a new advisory group. The project has been initiated to address Scotland’s transition towards a lower consumption, circular economy in the context of the climate emergency.

Zero Waste Scotland has recently formed an independent advisory group, the purpose of which is to analyse the challenges associated with decoupling our economic and social prosperity from the environmental impacts of resource production, consumption and waste.

Key aspects we identified in the artist’s brief included: experience in shooting and directing film projects, skills in analytical thinking and storytelling and experience of working collaboratively with diverse groups and in non-arts contexts.

Following a competitive recruitment process, we’re delighted to be working with filmmaker Janine Finlay. Janine is an award-winning producer, director and cameraperson whose work has won a Scottish RTS Award in Science and Natural History, as well as multiple nominations (a Celtic Media Award for single documentary, a Children’s BAFTA award for documentary, and a Scottish BAFTA for specialist factual programming). She has over 20 years’ experience in the TV broadcast industry, including running the film unit at the World Wildlife Fund in the UK.

Over the next year Janine will follow the group’s journey, encouraging its members to view the topic from different angles and documenting its evolution over time. A key aspect of her role is to explore the complex issues surrounding decoupling and to help make them visible and engaging to a wider audience in the form of a short film.

Decoupling refers to the ability of an economy to grow or prosper without corresponding increases in energy and resource use and environmental pressures. Decoupling is seen as a central part of the transition to a circular economy.

Despite this there is no evidence to show it has been achieved anywhere near the scale needed to deal with environmental breakdown or that it is likely to happen in the future – as highlighted in a recent report, Decoupling Debunked, produced by The European Environmental Bureau.

Thus, Zero Waste Scotland has formed an advisory group to undertake a critical assessment of the viability of decoupling at the rate necessary to address the climate emergency and biodiversity loss crisis. Key challenges the group will address include:

The members of the advisory group will be asked to provide expert advice and input through various formats and their responses will help inform Zero Waste Scotland and the public on how best to tackle the challenges associated with achieving decoupling.

The project will run from April 2020 to January 2021. Over the coming months Janine will take part in advisory group meetings and develop a narrative to help share its story. We will continue to update this page as the project develops.

This project is supported by Zero Waste Scotland and is run in partnership with Creative Carbon Scotland as part of our culture/SHIFT programme.

We know that changing the way we travel is one of the biggest challenges facing...

The Burnie Journey "Art and song have been the carrying stream of community...