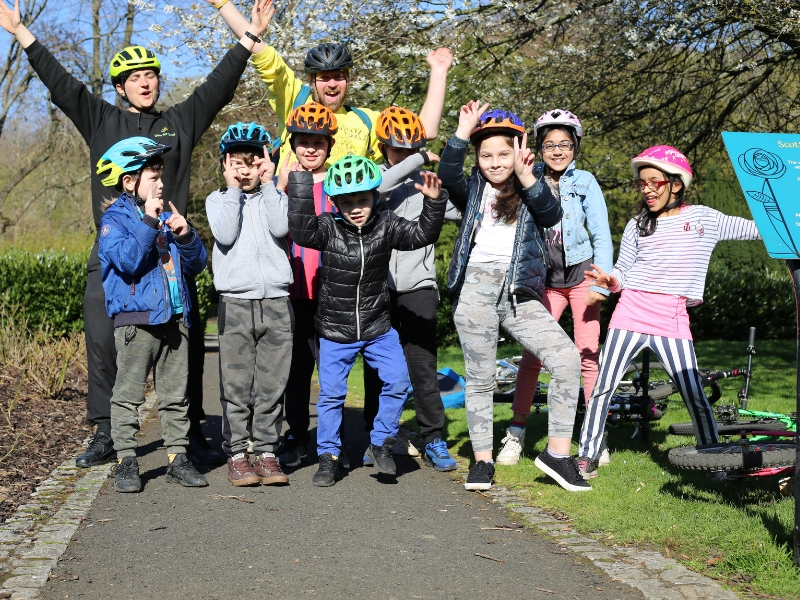 Can cycling save the world? This is one of the questions posed by this two-year project which has seen two artists embedded in a local cycling charity based in the southside of the city between April 2018 – 2020.

We know that changing the way we travel is one of the biggest challenges facing Scotland (and the rest of the world) in our response to the climate crisis. In Scotland, transport accounts for 27% of the country’s total CO2 emissions with road transport (that’s cars, lorries, vans, buses and motorcycles) accounting for 73% of total transport emissions – a 4% increase since 1990.* This requires work by everyone – government, organisations, communities and individuals – to re-imagine and change the way we get around. Creative practitioners are well placed to help us in this challenge!

Over the course of the embedded artist project Lewis and Geraldine have been working on two films produced collaboratively with Bike for Good participants and staff to explore how cycling can help to build community, make a better, more sustainable Glasgow and contribute to Scotland’s efforts to tackle the climate crisis.

The second, longer film premiered in October during Scotland’s Climate Week 2019, with local community groups at the Bike for Good South Side Hub. ‘Let’s Go!’ is a film about cycling, community and climate change. It again features member of the after-school bike club and other participants in Bike for Good’s services as well as volunteers and staff. The project team was also invited to screen the film and run a workshop at the International Healthy Streets Summit 2019; this also took place during Climate Week.

The first film was launched at the 2018 Challenge Fund Gathering at Perth Concert Hall to an audience including community groups from across Scotland who are taking action on climate change in their local areas.

This film highlighted the experiences of a group of children (aged seven to nine) who attend a weekly after school bike club and shared the joy of a day trip to the beautiful Isle of Bute and rides around their local park. Working closely with this group over several months, the artists helped to draw out the wider benefits which cycling has brought to the young people’s lives including supporting their health and wellbeing, and made the connection between reducing carbon emissions and making positive changes to the way we live. Watch the film below.

Alongside the films, Lewis has produced a series of blogs which capture his own journey through the project and the questions, ideas and provocations which have been raised along the way. The blogs have provided the space to highlight some of the challenges we face when generating a cultural shift away from our current modes of life into new ones. In ‘I CAN’T WAIT TO DRIVE A CAR’, Lewis (unsurprisingly) relays a conversation with one of the young people about his aspirations to drive a car when he grows up, despite being a fanatic about cycling and regular attender of the after-school bike club.

“As much as they love cycling, car usage is the model of transport that is presented to them all day, every day. Pavements are for people, train tracks are for trains, roads are for cars, and our cities are built around roads. It’s the model we all take part in every day.” (Lewis’s Guest Blog, April 2019)

In supporting collaborations between creative practitioners and non-arts partners such as the VeloCommunities embedded artist project, it’s our hope that new ways of thinking about and addressing these complex cultural as well as social, environmental and economic challenges are identified and that artistic practices are more commonly included in our approaches to tackling the climate crisis and building a better, fairer, more environmentally sustainable world.

You can enjoy Lewis’s blogs here:

This embedded artist project is part of Bike for Good’s VeloCommunities Project, which is funded by the Scottish Government’s Climate Challenge Fund.

Please get in touch with Creative Carbon Scotland’s culture/SHIFT Producer Gemma.lawrence@creativecarbonscotland.com if you wish to find out more about this project or more about other culture/SHIFT projects which support collaborations between artists and environmental initiatives.