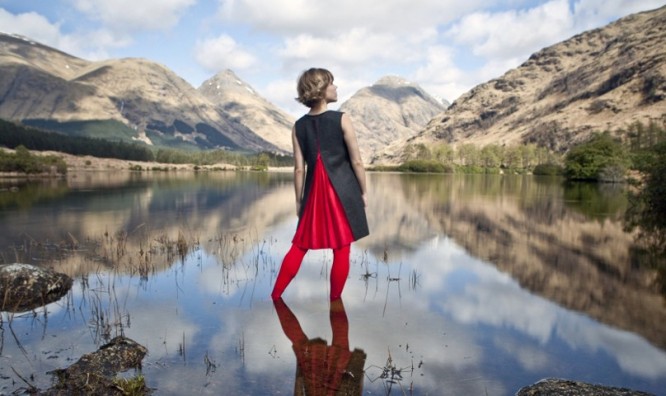 Air falbh leis na h-eòin, or Away with the Birds, is a body of work exploring the mimesis of birds in Gaelic song by Glasgow-based artist, Hanna Tuulikki. On August 30th, Creative Carbon Scotland’s Project Assistant Catriona Patterson travelled to the Isle of Canna to witness the sited performance work.

Although only part of Tuulikki’s work, the Canna performance of Away with the Birds focused on the vocal composition, Guth an Eòin/Voice of the Bird. The artist states that the work “explores the delicate equilibrium of Hebridean life, the co-existence of tradition and innovation, and suggests the ever-present inter-relationship between bird, human, and ecology.” This is constantly present in the piece; the very combination of the natural Hebridean soundscape with Tuulikki’s pre-recorded sounds, and the vocal harmonies of the performing singers served to demonstrate the interactions and commonalities of living things in such an environment. So concentrated was the attention to the performance, and so uniquely quiet the setting, that even the hum of an anticipatory audience seemed to contribute to the piece – each viewer forced to recognise their audible impact on the environment.

After gathering at the historical Canna House – a home to the performers, and a source of contributory material and support for the work – the audience members were led through the garden to the shore line, where one has a view of the entire Canna Harbour (luckily calm for the duration of the performance). We were met with the sight of all of the performers, dressed in dark dresses with red inserts, and red tights, calve-deep in the harbour water – an act that is not only visually quite stunning due to the reflections of the water, but also an unfamiliar site on a Scottish coast, eliciting much temperate empathy from the audience. The ten performers – including Tuulikki herself – proceeded to intermingle a range of sounds and voices, almost in a call and response format that weaves fragments of traditional Gaelic songs and poems reminiscent of birdsong. However, the sounds were less fragmented as this format would typically suggest. Instead, the outcome was almost a layering of sound – a composition of a co-operating landscape of interdependence, and greater than the sum of its parts.

The piece itself was centred around five movements, each which represents a different bird community (wader, sea-bird, wildfowl, corvid, and cuckoo) and entitled: “by the shoreline”, “on the cliffs”, “ebb tide (lament)”, “flock and skein” and “night – flight to the burrow” respectively. The titles and pictorial scores too evoke the atmospheric nature of the piece.

It was an immensely soothing experience, particularly with the constant ebb and flow of the immediate sea water, as the harbour tide came in for the evening. The physical movement of the vocalists around the performance space, and sometimes behind the audience, completed the immersive nature of the piece, ultimately even widening it to our whole surrounds – to the entire environment of Canna itself.

The location of the Away with the Birds performance was central to its production. Although a location not easily reached – the island is at least seven hours travel from Edinburgh – Canna inspires much of material of the piece, and it’s creative community has enabled the performance to be enriched by the heritage the island offers. The sheer influx of people must have put quite a strain on the island’s infrastructure, yet the event’s relationship to Canna is also somewhat reciprocal. Around 200 people witnessed the performance on Friday 29th and Saturday 30th August, a number ten times greater than the regular population of the place. Such an increase in appreciative visitor numbers not only boosts the immediate local economy (including an honesty-system community shop and cafe), but also the tourist connection with nature and the arts on the island, which perhaps might open other avenues of sustainable connections for the inhabitants.

Waking up the next morning, having camped overnight on Canna at a special Away with the Birds campsite, one was almost immediately thrown back into the performance. The calls of the various sea birds surrounding the site presumably must have been present the day before, but had gone unheard. Perhaps Tuulikki’s piece forces us to be awoken more fully to nature.

Away with the Birds took place on the 29th and 30th of August. It was produced by Suzy Glass, the Canna Community Development Trust, National Trust for Scotland and Cape Farewell, and was part of the Glasgow 2014 Commonwealth Cultural programme.