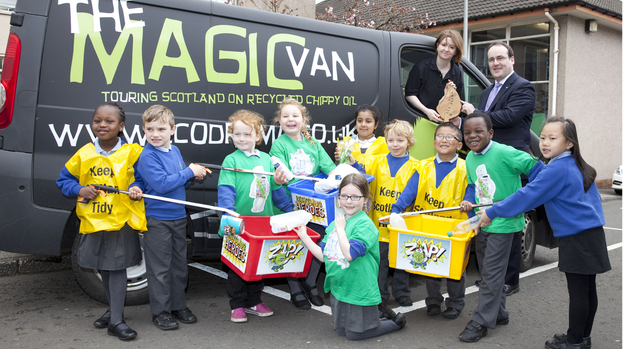 Eco Drama is one of the programmes of Glasgow-based Whirlybird Theatre Company, engaging children and young people with the environment through theatre productions and learning journeys.

The programme is dedicated to creating meaningful experiences which engage children, young people and the wider community with the values of the natural world. By inspiring a sense of responsibility and appreciation for the environment, Eco Drama uses the creative experience to ultimately reduce carbon emissions.

Eco Drama has a green ethos at its heart and tours in the eye-catching Magic Van, run on 100% recycled vegetable oil, reducing touring carbon emissions by 85%. Even for tours not using the van, the programme staff use public transport, and the company was recently awarded a grant to support their purchase of an electric car, as an additional green touring vehicle.

The following case studies illustrate some of the company’s latest work and highlight the real benefits that the project is bringing to young people and communities.

Eco Drama’s most recent production is aimed at children and families, fusing live performance, music and living plants with an innovative and sustainable stage design.

For the first time in Scotland, the production will feature a Living Stage; a recyclable, biodegradable and edible set created from locally found, reclaimed materials. At the end of its touring life, the living stage will take up residency at the Corpus Christi Primary School, where the set pieces will be used as garden planters to grow the school’s food, sustained by compost from the produced food waste. The production will also leave a piece of set at each of its touring locations, to re-plant in the soil of the local area.

Director Emily Reid is working with internationally acclaimed set designer Tanja Beer, an expert in living stages, to construct this multi-sensory performance bringing nature to the heart of the production.

The Forgotten Orchard is a production written by Eco Drama for ages 8+.  The show draws inspiration from Scottish apples and our lost orchard heritage, and aims to spark imaginations and re-connect young people emotionally and intellectually with their food and where it comes from. The production was created in collaboration with staff from Eco Schools Scotland and Let’s Live Local, and has garnered great reviews from the likes of Thom Dibdin.

The show is being delivered to primary schools across Scotland, as well as being performed at Apple Days, festivals, community venues and theatres.  During 2013-15, Eco Drama, in collaboration with ‘The Appletreeman’ Andrew Lear, has planted a staggering 147 fruit trees across Glasgow City, including a community orchard at the new Townhead Village Hall in Glasgow city centre. Teachers are provided with Orchard Training and 3 Scottish apple trees to get started, made possible with support from the Scottish Government’s Climate Challenge Fund.

The production is complemented by a creative learning workshop, ‘What On Earth Am I Eating?‘, delivered for schools working on the Eco Schools ‘Food and Environment’ theme.

The Worm; An Underground Adventure

Eco Drama’s performance for 3-7 year olds, ‘The Worm’ is an immersive, musical tale celebrating the wonder of life beneath our feet. Post-performance, the audience get to see some real worms and learn about the importance of ‘worm poo’ in helping us recycle food waste and its importance in contributing to healthy nutritious soil. Nurseries and schools booking this performance receive a wormery and kitchen caddy to start them on their composting journey.

‘The Worm: An Underground Adventure’ has received stellar reviews from Broadway Baby and the Edinburgh Guide, and has most recently toured with the Puppet Animation Festival in spring 2015.

Eco Drama have also been delivering creative learning workshops ‘Recycling Heroes’, ‘Eco Gadgets’ and ‘The Oil of Life’, all of which enable learners to explore environmental topics in greater depth through the medium of drama and inspire that we can all make a positive difference to our natural world. The programme also delivers ‘The Armchair Bike‘, a comfortable, pedal-powered mobile armchair available for hire by community groups, schools and festivals.

Eco Drama is committed to evaluating the social and environmental impact of theatre and drama education on behaviour change, carbon emissions and on young people’s personal development. The company has developed an online Carbon Calculator, enabling both Eco Drama and schools to record the behaviour patterns of pupils before and three months after participating in an Eco Drama project, relating to specific areas: Recycling, Travel, Energy & Food Waste. ‘Before’ and ‘after’ questionnaires are carried out to assess the changes in behaviour patterns and activity of pupils, and these changes are then converted to CO2 reductions using the Carbon Calculator and the latest conversion factors (DEFRA Business Conversion Factors for Company Reporting and Scottish Government Low Carbon Route Maps).

Pupils can view a visual graph showing their behaviours and carbon emissions, and how these might have changed as a result of greater awareness and learning in the area.  Graphs are shown per class and also as a whole school, motivating pupils with their personal progress as well as a collective Eco School.

The positive behaviour change induced by Eco Drama productions and workshops has generated a significant reduction in carbon emissions. Between April 2011 and March 2012, a range of workshops and productions in West Dunbartonshire schools generated a CO2 reduction of 548.72 tonnes across these schools, in the areas of waste minimisation, reductions in energy usage and sustainable travel.  By touring in the Magic Van, Eco Drama saved 2.1 tonnes of CO2 from its own carbon footprint during this tour.

Going forward, Eco Drama has new projects and productions to keep them on track to achieving similar, if not substantially better carbon reduction results for 2015/16 and beyond. The company continues to provide valuable learning experiences for children, teachers and the wider community, enabling its audience to adopt sustainable practices such as food-growing and waste reduction, as well as bringing them closer to the natural world and its wonders.