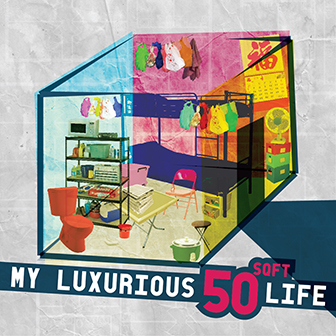 Hong Kong-based Cinematic Theatre Company altered their production to make it more sustainable when touring internationally, and when performing as part of the Edinburgh Festival Fringe 2014.

My Luxurious 50 Square Feet Life is a multimedia theatrical production which aims to address the housing shortage in Hong Kong, and the social implications of increasingly small living spaces, often unfit for human habitation. The production used a cross-section of mediums and formats (including direct interaction with the audience, more traditional solo performance, pre-recorded videos projected onto one of the venue walls, a ‘game show’ format and a projected and live-acted familial scene shot from above) and had a successful run during the 2014 Fringe season, as well as being nominated as one of the finalist for the Centre for Sustainable Practice in the Arts Fringe Sustainable Practice Award.

Cinematic Theatre Company developed and adapted their show to increase the environmental sustainability of their international tour in a variety of ways:

Originally, the set consisted of a full-scale black-box replication of a typical Hong Kong 50 square-foot apartment. However, to reduce the amount of time and resources needed when travelling, and to reduce transportation costs, the company creatively designed a ‘flattened‘ version of their set: a floor plan of an equivalently sized apartment, marked on the floor of their venue. In this it was possible for audiences to comprehend the scale of the apartment discussed – particularly as the promenade theatre form allowed for audience interaction with the space and closer inspection of the size. A similar idea was also used later in the production where a further floor based set was used as a image-heavy but resource-light backdrop to a familial scene, projected on an accompanying wall for a three-dimensional effect.

Further to this, the theatre company also spent time considering how to source and discard of their set and props after the duration of the production. As well as committing to sourcing the few necessary props from their venue in Edinburgh (reducing travel carbon emissions of heavy goods), they also donate all their remaining materials to other theatre groups to ensure continued use of costumes and props.

As well as minimising the resources needed for the fabric of the show, the production company also addressed their resource use regardig publicity to enhance their overall sustainability. In using very minimal print materials (audience members had to request printed leaflets, rather than them being openly distributed), the company minimised their costs, their wastage and their carbon footprint. Instead they used social media sites and promotional videos to allow them to focus their efforts on attracting their target audience.

Longevity of the Production

Using the same resources repeatedly over a period of time increases the efficiency of their use, and the long-term sustainability of a project. In reference to touring productions, limited or short runs of productions can result in a large amount of wasted resources, and often Edinburgh Festival Fringe productions exist for the duration of the three week festival. However, Cinematic Theatre Company have attempted to reduce this wastage by bringing an existing production to the Fringe, and extending its international run into 2015. As well as improving the environmental sustainability of the show, this also increases the longevity of the project for those involved, and even potentially the quality of the production over time!

To read our #GreenFests Highlights review of the production, click here.