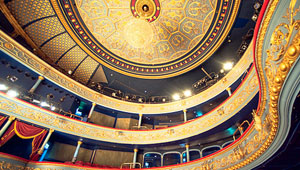 Since 2006  staff at The Lyceum Threatre in Edinburgh have been working hard to reduce the impact of their building. By measuring and reducing the theatre’s water and energy usage and waste production, 152 tonnes of CO2 have been saved, generating financial savings of £187,723 [calculated at 2006 prices].

The Lyceum’s building’s manager, David Tildesley, recently gave CCS a breakdown of the key reductions made and financial savings in terms of water, energy and waste.