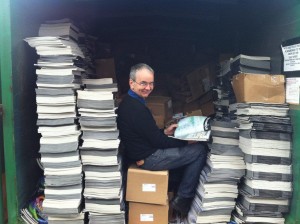 Ben dealing with the recycling!

The Fringe Reuse and Recycle Days are an important opportunity to collect data and promote the reuse, repurposing and recycling of production materials.

At the end of the Edinburgh Summer Festivals Season each year, Creative Carbon Scotland and the Edinburgh Festival Fringe run the ‘Re-use and Recycle Days‘ for venues and companies to recycle publicity and production materials.

In 2011, 12 tonnes of unused print were collected during the event, most of which were in unopened bundles and boxes (see Ben in the collection van!) Through this activity and its subsequent documentation the major Fringe venues, The Pleasance, Guilded Balloon, Underbelly and Assembly Rooms, were made aware of the problem of the surplus print they were producing. This message was effectively communicated between the Fringe venues, leading to a reduced combined print run of 25% the following year.

Although there were clear risks in reducing print runs- namely lower ticket sales through reduced publicity – the results were positive, with no loss to ticket sales and savings on printing costs.

Since 2011, the event has grown to include a swap-shop for costumes, props and other set items. More information about the Re-use and Recycle Days project can be found here, including an impressive time-lapse video of the days’ collections.