In this case study, Tom Forster, Green Champion of Summerhall, gets us up to speed on their hosting of this year's Dr Gavin Wallace Fellowship. A writing Fellowship for one year, Summerhall's edition is focused on change, sustainability and how the past informs the present.

In 2019, Summerhall is the sixth host of the Dr Gavin Wallace Fellowship, supported by Creative Scotland. A year-long writer-in-residence role, the position invites the writer to create new work on the theme of change, sustainability and how the past informs the present. In setting the theme we considered sustainability from a number of angles:

The Challenge of Sustainability and the Edinburgh Festival Fringe Summerhall receives around 250,000 visitors during August and 200,000 the rest of the year. The fluctuation of activity and consumption in Edinburgh in August is unlike anything else, probably on the planet, and it continues to grow every year.

“We all know that the Fringe is unsustainable, and increasingly folk are willing to say it. The physical and emotional unsustainability that’s clear to anyone working or living here in August – the atmosphere of constant activity, the expectation of constant work, the late nights, the unending obligations, the crowds, the noise, the failures, the debt – is a direct and systemic product of the economic, social and environmental unsustainability….” Harry Giles, 2017

And then there’s the crash. The end of 6,271 full-time jobs and £170 million off Scotland’s monthly balance sheet. A micro-recession and depression due to an overload of cosmopolitan privilege. While much else involved in the festival shuts down to recover, we remain open to the public; hungover and nostalgic.

Using this micro-recession as source material, alongside its planetary companion, is the starting point we have offered to our Dr Gavin Wallace Fellowship artist; investigating sustainability and change on a micro and macro level.

Given the enormity of the climate change challenge, as per the recent IPCC report, the concept can be beyond the capacity of humans to take in.  We invited the writer in residence to consider sustainability as a hyper-concept: an idea that exists outside of our consciousness. What we are looking for (and need) is an alternative reality.  We need to find new patterns of thought, which is what fiction and imaginative writing is best placed to do.  Researchers believe that the arts and cultural sector can act as a bridge to achieve behavioural change and implementation of sustainable practices in society by working to engage the public, design solutions and initiate a shift in cultural values to support a more sustainable future, and Creative Carbon Scotland has begun this work in Scotland.

The current climate crisis clearly stems from decisions taken in the past which did not consider the future consequences, a huge global example of how the past informs the present.  Again on a micro rather than a macro level the past influences the present every day at Summerhall – our work is carried out in a building designed for the teaching of veterinary science, not for the presentation of theatre, music, visual art nor to be open 7 days a week to the public.  Summerhall is full of untold stories and there is a mass of historical and contemporary material within the building, its history, its residents, its artists and its visitors.

We believe that our theme of change, sustainability and how the past informs the present is sufficiently broad for the writer to be able to take that in a direction which works for them, and that the life and work of Summerhall offers many potential starting points to investigate this theme on a micro and macro level. 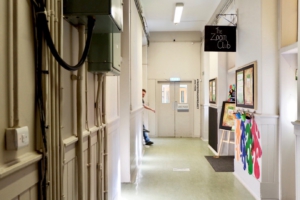 As well as studio space, the writer has unlimited access to all areas of Summerhall and its events, performances and gigs.

There are benefits to both the artist and the host of the Fellowship:

For the writer: As well as a private work space at Summerhall, the selected writer also received access to the full range of the organisation’s activities (attending exhibitions, gigs, Fringe shows, observing sustainability and other projects and meeting visiting artists, staff and residents), a bespoke programme of support and engagement, and a £20,000 bursary.

For the organisation: As host of the Fellowship, we hope to generate ideas of alternative pathways towards our own sustainability initiatives, as well as greater artistic engagement with our building’s history and current activities. The writer’s creative responses will be shared online and through live events as appropriate. 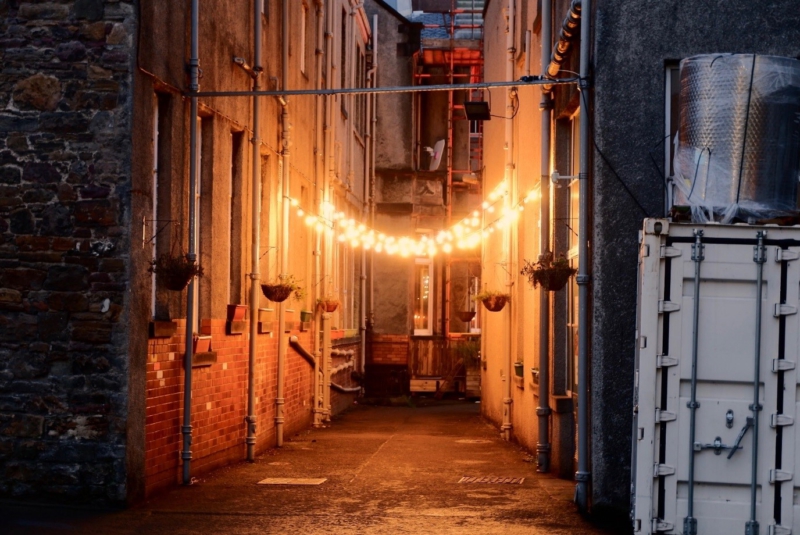 Jenni Fagan is an Edinburgh based writer and poet who will work with Summerhall to create a poetic Almanac, provisionally entitled “The Bone Library”.

The Fellowship was open to professional mid-career or established writers based in Scotland, who had published at least one novel, graphic novel or equivalent work, one collection of short stories, one poetry pamphlet or had one professional production of their work staged or broadcast. An open call took place over winter 2018-2019.

Scotland-based poet and novelist Jenni Fagan was announced in February 2019 as the selected writer for the opportunity.

Although just at the beginning of the Fellowship year, Jenni has strong ideas about her approach:

To focus my time at Summerhall I would be really excited about the idea of creating a poetic Almanac that captures twelve months, four seasons, and the ghosts, characters, artists, that have influenced the character of the building and those who do today. I would devote each month to a different space in the building, different practitioners and events. An original Almanac used the seasons, sun and tides to predict a future year. I would be using the numerical division of time into twelve sections and four seasons to show the tides — of Summerhall as a creative hub.

The original use of the word Almanac was in Latin in 1267 by Roger Bacon and it was to depict heavenly bodies including the moon. There are no exact origins for the word Almanac, yet it impacted on culture in a very specific way. I believe arts hubs create a space with a similar mystery, and impact. Where the most interesting minds of our time can be nourished, push boundaries, bring their own losses, hopes, faith and life journeys to the experience. I would want to create a sense of mystery and intrigue, underlined with precision and clarity in the Summerhall Almanac. At the end of the year I would produce an actual Almanac capturing my twelve months there, showing history, change, seasons and sustainability along the way.

Where an original Almanac looked at religious festivals I would look to find that in festivals naturally created throughout the year, from the Edinburgh Festival Fringe, to film, to art openings, to happenings, to Hallows Eve, to Christmas, from summer to Autumn. I would like to create small pamphlets throughout the year — or small print outs of poems as they occur, leave them in random parts of the building for people to pick up. I would love to project a poem onto the stairs perhaps, or put one in light at the back of the bar. I would like to write a poem on the floor and another on a ceiling.

Next Steps and New Partnerships for Sustainability

The main challenges of the residency from Summerhall’s perspective are the financial assets such as the writers bursary, studio space and ticketing. Thankfully, sustainability is an interesting and vital topic that Creative Scotland was excited to explore with us, and we feel is a great example as to how new partnerships can come together to help address this emergency.

Jenni started her residency with us in late February 2019 and we look forward to working with her to generate alternative pathways when it comes to considering sustainability, change and how the past in forms the present. Summerhall are a member of our Green Arts Initiative: a growing networked community of practice of 220 Scottish cultural organisations committed to reducing their environmental impact. It is free to become part of the community, and there are lots of resources and case studies (like this one!) to support #GreenArts organisations. Take a look at our Green Arts Initiative page for more information.

All images are from Summerhall