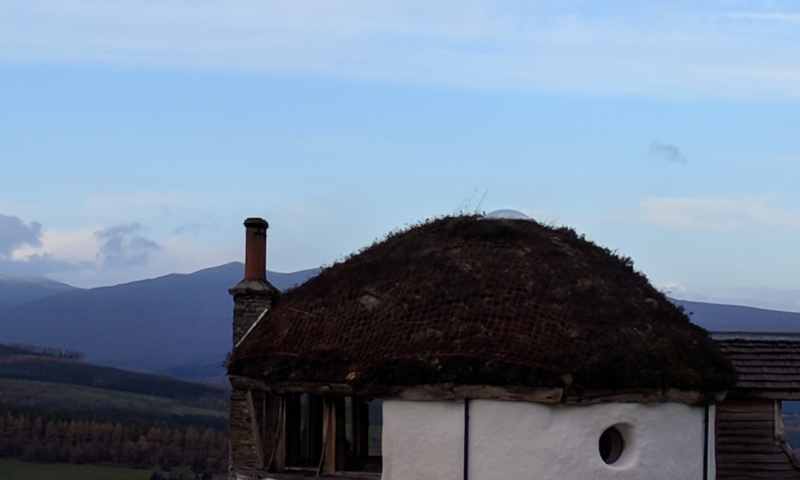 In this case study, we talk to Moniack Mhor about their innovative and sustainable Straw Bale Studio, finding out more about the conception and development of their sustainable cultural building!

Moniack Mhor, Scotland’s Creative Writing Centre, is based in Kiltarlity, 14 miles from Inverness. Their programme aims to support developing and established writers, and they host courses, workshops and retreats around 46 weeks out of every year. Celebrating 25 years since its opening in 1993, the centre was initially funded through two sponsored ‘Poethons’ – 24 hour poetry recitals – in Edinburgh and London. 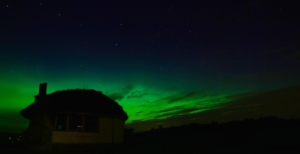 Moniack Mhor were the 200th Scottish cultural organisation to join the Green Arts Initiative, becoming members in early 2018. However, they are not new to trying to reduce their environmental impact. In fact, they have been working on increasing the sustainability of their work for many years, having constructed their Straw Bale Studio – an eco-building – back in 2013.

We spoke to Sarah Kinghorn, Moniack Mhor’s Green Champion, and Rachel Humphries, the centre’s Director, to find out more about their green building, how it came about, and what advice they would give to others looking to do something similar. 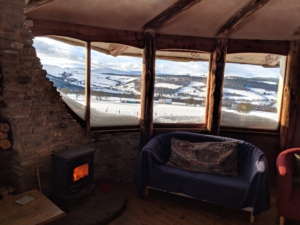 Back in 2013, Moniack Mhor was constrained by its existing building, and was particularly looking for a space to hold 1:1 tutorials, host readings and workshops, and to offer to writers on retreats as a quiet and contemplative space to write. When thinking about a potential building to meet this need, one of the staff members had joked about creating a ‘hobbit house’: a low-impact home built into a hillside, which had recently been the subject of Channel 4’s ‘Grand Designs’, made by a family in Lammas, Pembrokeshire, Wales. However, the idea took off, and quickly gained traction – Moniack Mhor successfully raised the funds for the studio, with support from Creative Scotland, The Gannochy Trust, The Robertson Trust and The CPF Trust, as well as individual donations.

The whole building is extremely sustainable in its design, components and construction:

The studio, including the unique double reciprocal roof structure, was designed by Steve James, who also manage the construction. Steve brought the building to life, supported by a team of around 30 volunteers over the course of around 18 months. Throughout the duration of the project, the volunteers and members of the local community gained the opportunity to join a programme of garden/landscape/therapeutic workshops including drystone walling, attracting wildlife, polytunnel management, vegetable gardening and yoga. You can see images of the construction of the site, and of many of the different elements, on Steve’s website, Envisioneer.net.

During the construction phase, Moniack Mhor also developed the grounds of the centre in partnership with the local community and the Beechgrove Garden. This included building beds of local plants, planting soft fruit, creating a paved, welcoming entrance, building a dry stone storytelling circle with a central fire pit and creating a path network to enhance accessibility.

Now the Straw Bale Studio is a key part of Moniack Mhor’s year-round activities and events. It costs nothing to run (except for the fuel required to stoke the fireplace), and it is a key part of their site.

Sarah and Rachel had a few key tips for other cultural organisations who may be interested in similar projects:

Moniack Mhor are a member of our Green Arts Initiative: a networked community of practice for Scottish cultural organisations committed to reducing their environmental impact. It is free to become part of the community, and there are lots of resources and case studies (like this one!) to support #GreenArts organisations. Take a look at our Green Arts Initiative page for more information.

All images are from Moniack Mhor.